Version 5 of the CCIE exam is organized into 6 categories versus the existing 11. Don’t let the number of categories fool you with regards to complexity of both the CCIE written and the CCIE lab exams. For example, Implement IP Multicast used to be called out as a separate category but is now included in both the new Layer 2 and Layer 3 categories.

Version 4 of the CCIE exam had the following 11 categories:
1. Implement Layer 2 Technologies

11. Evaluate proposed changes to a Network (written only)

Version 5 of the CCIE exam not only consolidated some of the categories but also listed the percent of each category that is included in both the CCIE Written and the CCIE Lab exams. This is huge as you know going into the exam where the highest percentage of points are going to be.

Version 5 of the CCIE exam and their respective weight for the 6 categories is as follows:
% Written % Lab

As you would expect the highest percent technology on both the written and lab exams is Layer 3 Technologies followed by Layer 2 and VPN Technologies, hence the name CCIE Routing & Switching. Let’s look at what is actually covered in each of the six categories.

Network Principles is a new category that includes foundational topics that are covered only on the written exam.

Layer 3 Technologies covers both interior and exterior routing protocols (RIP, EIGRP, OSPF, ISIS and BGP). Both IPv4 and IPv6 will be included as well as more focus on dual-stack technologies. As mentioned earlier, while IP Multicast is no longer a separate category it is included in both the Layer 2 and Layer 3 technology category.

VPN Technologies is a new category that includes Tunneling and Encryption. Tunneling includes MPLS L2 and L3 VPNs and well as DMVPN and IPv6 Tunneling techniques. Encryption includes IPsec with pre-shared key. GETVPN is also included but only on the written exam.

Infrastructure Security includes both Device and Network Security with both focusing on features supported in ISR routers and CAT 3K switches. It excludes topics that rely on dynamic crypto (PKI) or any remote servers.

Infrastructure Servers includes System Management, Services, Quality of Service (QoS) and network optimization. Again, where QoS was a separate category in version 4 of the exam, it is still included is version 5 of the exam, it is just absorbed in a different category. Layer 2 QoS topics are included on the written exam only.

What’s been added and removed from the new CCIE exam?

So what topics were explicitly added, removed or moved from one CCIE exam to the other?

Topics explicitly moved from the version 4 CCIE Lab exam to the version 5 CCIE Written exam are as follows:

Topics removed from version 5 of the CCIE Routing & Switching exam all together include the following:

Topics added to version 5 of the CCIE Routing & Switching Written exam are as follows:

Topics added to both the version 5 CCIE Routing & Switching Written and Lab Exams are as follows:

While the CCIE certification has long been the standard for network excellence, previous versions of the CCIE Lab did not test real-life scenarios. With the change to version 5 of the exam that could change. Topics such as Frame Relay (to include Frame Relay Switching) and WCCP are completely removed from the lab whereas there is sure to be more focus on relevant topics such as IPv6 and troubleshooting methodologies.

While the CCIE Written exam remains essentially the same, the CCIE Lab exam has significant changes. As was rumored, the entire version 5 Lab exam will utilize virtual devices just like version 4 of the CCIE exam did in the troubleshooting section. This allows the exam to provide a more realistic network with larger network topologies (potentially 20+ routers) while also improving the reliability of the exam environment. Utilizing virtual routers and switches will remove dependencies on specific hardware platforms.

Where to go from here?
If you are just starting your CCIE certification journey…stick with the core protocols and concepts noted above and you will be fine whether taking version 4 or 5 of the Lab exam. If you are 75% of the way through your studies, just continue what you have been doing and don't freak out about the looming deadline. Just pace yourself to successfully cross the finish line before June 14th, 2014. If you are working towards completing your CCIE certification on the version 4 lab, remember to schedule your lab date far in advance as dates are sure to fill up as June 14th, 2014 gets closer. Best of luck!

The below article was our original article commenting on many of the CCIE rumors.

As I am sure many of you know, there has been increased chatter about an upcoming CCIE version 5 update. Although many people thought there would be an announcement in June 2013 at Cisco Live US event, that did not happen. So with the current CCIE Routing & Switching blueprint 4 and a half years old, it makes it much more likely there may be an announcement released sometime this November 2013 by Cisco. Why is that? Well on the January 2014 Cisco Live Milan program there is a session titled “CCIE Routing & Switching version 5”.

As with most Cisco exam changes, you will more than likely have 6 months to test on the existing blueprint before it is officially retired. So if you are studying for your current CCIE certification, you will want to probably target scheduling your exam prior to April of 2014 as soon as possible so you are sure you be able to secure a lab date. As if you wait too long such as after the official announcement, you might find there was a mad rush and all the dates you could have taken it are now filled.

There has been lots of speculation that Cisco will virtualize the entire CCIE lab. If you recall, in the version 4 CCIE lab, Cisco introduced a virtualized environment for the troubleshooting portion of the exam running IOU. So it would not be out of the realm of possibility that Cisco extends that to the Configuration portion of the CCIE exam. This will give Cisco almost an infinite pool of configurations to create your exam experience from as they are no longer tied to a particular piece(s) of hardware. It will also allow Cisco to more easily tweak the exam experience based on changes that are happening in the real world.

Another change we are hearing whispers about are the lab sections themselves. Historically there has been a configuration portion of the exam in which you were provided 6 hours to complete. Additionally there is a troubleshooting portion that is 2 hours in duration. As you probably have seen with the advent of the TSHOOT exam in the CCNP series and the enhanced focus on troubleshooting in the CCNA certifications, it seems Cisco might augment the Troubleshooting portion of the CCIE exam with a Diagnostic portion on the exam or it might even be its own section of the exam. I guess we will have to wait and see. But it seems like Cisco wants to make sure their CCIEs sharpen their skills in troubleshooting Cisco’s products and not simply focus on the design and configuration of corporate environments. This will probably mean that simple configuration tasks on the exam will be minimized while you will be tasked with shaping and tweaking Multi-cast, QoS and the like.

But I would suggest that you don’t worry about it too much as with proper preparation you will do just fine. So what should you do if you are in the early stages of your CCIE exam prep? Don’t panic and remember that R&S is R&S. The core of Routing and Switching did not change overnight. You just want to be a little more selective on the topics you study. I would venture to say that 80 to 90% of the topics will stay the same like OSPF, BGP, STP, and IPv6. So what might drop from v4 to v5 of the CCIE exam? I would guesstimate Zone-Based Firewalls, RIPv2, Frame-Relay, WCCP, and there is debate over PfR. Also the IOS will change from 12.4(yes, it is still based on 12.4 that was sunset over 18 months ago) to 15.x on both the routers and switches. So what is a candidate to be added to the CCIE v5 exam update? DMVPN to replace Frame-Relay, possibly ISIS, Embedded Packet Capture, IPSec and there will probably be an emphasis on IPv6 in general. 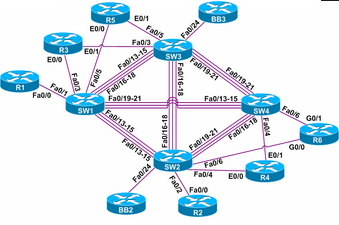 Now not to complicate things, but some people are speculating as we mentioned above that the entire lab will be virtualized and that includes the switches. So if that is the case, that might take some switching features you may have historically seen on the exam out of the equation such as the various SPANs, PVLANs, DHCP Snooping and QinQ Tunneling. But if for some reason Cisco does decide to use real switches in the new CCIE v5 blueprint, you might see some 3560-X switches or if we get lucky the 3850 as it seems to be the current favorite on the block.

So if you are just starting your CCIE certification journey…stick with the core protocols and concepts noted above and you will be fine to transition to the new blueprint. If you are 75% of the way through your studies, just continue what you have been doing and don't freak out about the looming deadline. Just pace yourself to successfully cross the finish line before April 2014. Best of luck!