IPv4 addresses are represented in dot-decimal notation, the 32-bit address is broken into 4 sections of 8 bits each known as octets, which are separated by periods. An example of an IPv4 address is 10.0.0.1.

Each address type has further sub-categories known as scope. There are four different types of Unicast addresses supported in Cisco IOS

The current IPv4 address allocation mechanism is defined by Classless-Inter-Domain Routing (CIDR) scheme, which replaced the classful addressing structure that divided IPv4 addresses into five different classes. This structure was not scalable and a lot of addresses were wasted. With CIDR the addressing scheme became more flexible and less wasteful. 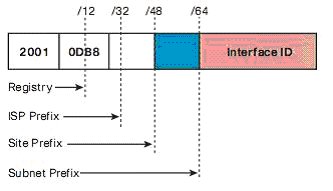 An IPv4 Packet Header has 12 fields with a total size of 20 octets (160 bits) as shown below. The 12 fields may be followed by an Options field of variable length, which is followed by a data portion that is usually the transport-layer packet. The shaded fields in the IPv4 packet header are not included in the IPv6 packet header

Following the eight fields of the basic IPv6 packet header are optional extension headers and the data portion of the packet as shown below. 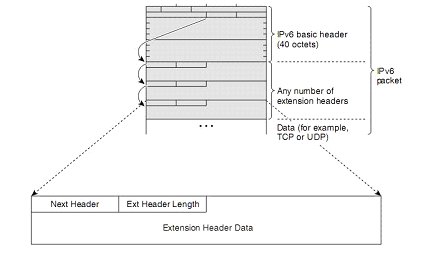 Note – Fragmentation is handled only in the sending host in IPv6: routers never fragment a packet, and hosts are expected to use Path MTU discovery.

An IPv4 address can be assigned statically or it may be obtained dynamically through DHCP. IPv6 has three assignment methods

An IPv6 host can configure a link-local address for each interface. By using ICMPv6 router discovery messages, a host can also determine the addresses of routers, additional addresses, and other configuration parameters

In this article we covered a few key differences between IPv4 and IPv6 addresses, currently, there are not many IPv6 networks deployed but as we move forward more and more networks will support IPv6 protocol to address the growing needs. Cisco CCNA Certification does not go much deep into the IPv6 world as of today but it is expected that the protocol will make a significant portion of the CCNA Certification Curriculum in the near future.