IPv6 networks are written in CIDR notation: a network is denoted by the first address in the network ending in all zeroes, compressed to ::, followed by a slash (/), and a decimal value indicating the size in bits of the address prefix. The IPv6 network for the address above is written as 2001:8:85a3::/64

IPv6 unicast addresses are subdivided into the following categories

Shown below is the format of IPv6 Multicast Address 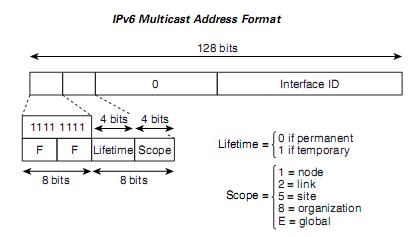 This brings us to the end of this lesson in which we learned IPv6 address formats and different types of IPv6 addresses. This is one of the key IPv6 lessons as further lessons such as IPv6 Routing and Transition to IPv6 are based on this.