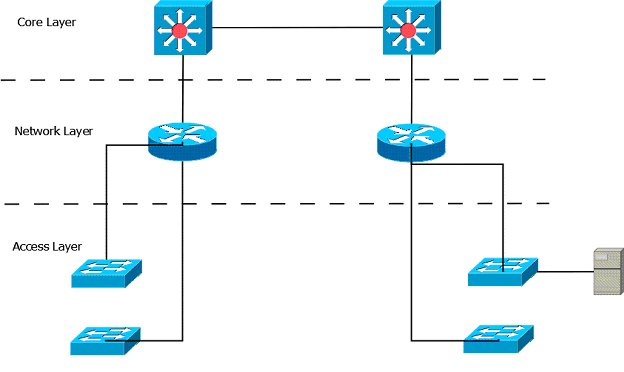 Cisco’s 3 Layered model consist from the core, the distribution, and the access layers.

The Core layer is actually the backbone, or the core, of your network. This is the most critical layer because its purpose is to provide fault isolation and backbone connectivity. The core layer must be able to switch traffic at the highest speeds possible in a timely fashion. Also, at the core layer, the network must have a level of redundancy, used in case of link or hardware failure. You should not use this layer to create services for your users.

Because it has to be a fast and reliable layer of your network, you should not implement at this layer anything that can slow down the traffic, like ACLs, Inter-VLAN routing, packet filtering. Also, don’t add support for group access and do not expand the core layer. If your current devices are not supporting the traffic, upgrade them, instead of adding more devices.

When you design the Core layer of your network you must make sure it will be reliable, meaning you have to use technologies able to carry large amounts of traffic and also provide a high level of redundancy, such as FDDI, Fast/Gigabit Ethernet or ATM. Also, a good practice is to use routing protocols with lower convergence times to avoid downtimes. Again, you have to design this with speed in mind. At the Core layer, you should have very little latency.

In smaller networks, you may see high-speed routers instead of switches at the core layer.

The Distribution layer is used as a communication point between the access and the core layer. Basically, this layer handles the routing, packet filtering, WAN access and determines how packets can reach the core if needed. This layer includes all OSI Layer 3 devices, such as routers and layer 3 switches.

At the distribution layer, generally, you would implement:

Finally, the Access layer, also called the desktop layer, focuses on connecting client devices, such as workstations, laptops, servers, and peripherals on the internal network (same broadcast domain). If a host must access a resource in some other network, the Distribution layer handles the traffic to reach that network. The access layer is used also to separate collision domains, filter MAC addresses, and implement load balancing.

At this layer, the most used technology is Ethernet. Routing protocols are rarely used, instead, static routing is often being seen.

As we already told you, this is the easiest hierarchical model and Cisco uses it in its network with great success. Although it is not a big topic for your CCNA exam, you must know what are the layers of Cisco’s Three Layered Hierarchical Model and what is their purpose.