There are numerous advantages of deploying a Storage Area Network due to which many enterprises have switched over the years to a Storage Area Network to cater to their storage needs. Some advantages include performance gains as Fiber Channel-based SANs allow higher connections speeds, reduction in the number of servers and data center space as fewer file servers are needed and one of the main advantages is the on-demand storage availability and virtualization.

Components of a Storage Area Network

Imagine a Storage Area Network as a layered architecture with three distinct layers known as the host layer which includes the Servers, fabric layer that defines the network that includes the fiber-optic cables, switches and connections, and the storage layer where the storage devices are located.

The figure below shows the depiction of this layered architecture 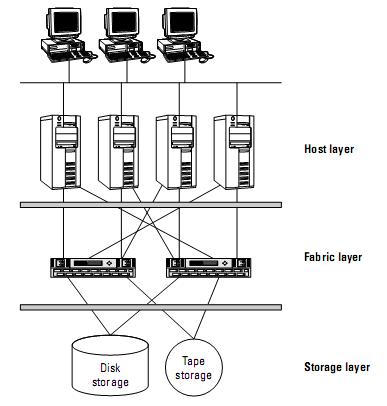 The Host Layer consists of the Server and its components related to storage. The server is connected to the SAN using a special card known as the Host Bus Adapter (HBA), the server communicates with the storage devices in the SAN using this card. The HBAs include an optical port for connecting to the fabric and are available in different speeds ranging from 1Gbit/s to 20 Gbit/s. The HBA also includes a software (driver) and firmware to interface with the server operating system and the storage devices.

The Fabric layer is the actual high-speed optical network that interconnects the storage devices and the servers. The actual network components of a SAN reside at this layer such as SAN switches. A SAN switch is a central connection point for all devices in a SAN, the servers and the storage devices connect with each using a SAN switch. A fiber-optic cable at one end connects to the server’s HBA and the other end connects to the SAN switch. By using SAN switches all devices connected can simultaneously communicate with each other. Different vendors offer SAN switches of which one of the most popular is the Cisco MDS line of Fiber Channel Switches.

The Storage layer is where the actual storage devices reside such as storage arrays, these storage arrays are usually huge devices that contain lots of disk drives for storing data. The disks inside the storage array are usually configured in a redundant fashion using the RAID (Redundant Array of Independent Disks) technology. RAID is used to divide and replicate data over multiple hard disks using different RAID types/levels.

This brings us to the end of an introduction to Storage Area Networks (SAN), today SANs have become an essential part of an enterprise network and it is important if you are a Network/System Administrator you have command over SAN concepts terminologies.