In preparation of your CCNP exam, we want to make sure we cover the various concepts that we could see on your Cisco CCNP exam. So to assist you, below we will discuss on of the more difficult CCNP concepts; Route Selection in Cisco® Routers. As you progress through your CCNP exam studies, I am sure with repetition you will find this topic becomes easier. So even though it may be a difficult concept and confusing at first, keep at it as no one said getting your Cisco certification would be easy!

One of the intriguing aspects of Cisco routers, especially for those new to routing, is how the router chooses which route is the best among those presented by routing protocols, manual configuration, and various other means. While route selection is much simpler than you might imagine, to understand it completely requires some knowledge about the way Cisco routers work.

There are no specific prerequisites for this document.

This document is not restricted to specific software and hardware versions.

There are three processes involved in building and maintaining the routing table in a Cisco router:

The main considerations while building the routing table are:

As each routing process receives updates and other information, it chooses the best path to any given destination and attempts to install this path into the routing table. For instance, if EIGRP learns of a path toward 10.1.1.0/24, and decides this particular path is the best EIGRP path to this destination, it tries to install the path it has learned into the routing table.

To understand this better, let's look at an example. Assume a router has four routing processes running: EIGRP, OSPF, RIP, and IGRP. Now, all four of these processes have learned of various routes to the 192.168.24.0/24 network, and each has chosen its best path to that network through its internal metrics and processes.

Each of these four processes attempts to install their route toward 192.168.24.0/24 into the routing table. The routing processes are each assigned an administrative distance, which is used to decide which route to install. 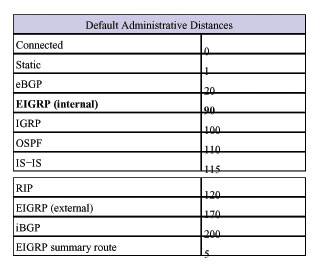 What do the other protocols, RIP, IGRP, and OSPF, do with the routes that weren't installed? What if the most preferred route, learned from EIGRP, fails? Cisco IOS® Software uses two approaches to solve this problem: The first is to have each routing process attempt to install its best routes periodically. If the most preferred route fails, the next best route (according to administrative distance) succeeds on the next attempt. The other solution is for the routing protocol that failed to install its route in the table to hang on to the route, and tell the routing table process to report if the best path fails.

Changing the administrative distance on routing protocols can be very dangerous! Changing the default distances can actually lead to routing loops and other oddities in your network. We recommend you change administrative distance with caution, and only after you have thought through what you want to achieve, and all the consequences of your actions.

For static routes, you can change the distance of each route by entering a distance after the ip route command:

ip route network subnet mask next hop distance
You can't change the administrative distance for all the static routes at once.

Let's look at another scenario to see how the router handles another common situation: varying prefix lengths.

Assume, again, that a router has four routing processes running on it, and each process has received these routes:

Let's see how the forwarding engine uses the information from the routing table to make forwarding decisions.

Let's look at the three routes we just installed in the routing table, and see how they look on the router.

Note: If the supernet or default route is learned via IS-IS or OSPF, the no ip classless configuration command is ignored. In this case, packet switching behavior works as though ip classless were configured.

Note: If the supernet or default route is learned via IS-IS or OSPF, the no ip classless configuration command is ignored. In this case, packet switching behavior works as though ip classless were configured.

The surprising answer out of these four is the last packet, which is dropped. It's dropped because its destination, 172.30.254.1, is within a known major network, 172.30.0.0/16, but the router doesn't know about this particular subnet within that major network.

The most confusing aspect of this rule is that the router only uses the default route if the destination major network doesn't exist in the routing table at all.

This can cause problems in a network where a remote site, with one connection back to the rest of the network, is running no routing protocols, as illustrated.

Configuring ip classless on the remote router resolves this problem by allowing the router to ignore the classful boundaries of the networks in its routing table and simply route to the longest prefix match it can find.