Consider the case of a hub and spoke topology with NBMA network (figure-1). 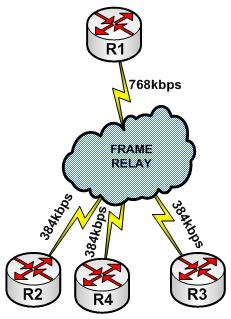 The hub is provisioned with 768kbps whereas spokes are configured with 384kbps of bandwidth. The total accumulated bandwidth required by spokes is 3 times 384 equals to 1152kbps (1.1Mbps). In case, all spokes start to transmit at the 384kbps, there will be considerable packet loss.

The best tool to compensate this problem is to add more bandwidth. But some link efficiency tool such TCP header compression can compensate this issue. Queuing can affect bandwidth for certain types of applications such as Voice over IP by prioritizing.

Delay is the time difference between the sender and receiver. For example: you sent a packet at 1:00pm in and packet received at the destination around 1:02pm. The delay is around 2-mintues. Delay can be fixed or variable.

Variable delays can be:

Tools that affect the Delay problem: bandwidth, queuing (or scheduling), link fragmentation and interleaving and compression.

It is variation in arrival rate. Consecutive packet that experiences different amount of delays. Data application typically expect some jitter and performance don’t degrade. However, real-time traffic such as VoIP is sensitive to both delay and jitter.

Tools that can affect Jitter include: bandwidth, queuing, link fragmentation and interleaving, compression and traffic shaping.

Router drop, lose or discard packets for many reasons. For example: CRC failures. But major traffic is dropped due to full buffer. Tools that affect packet loss include: random early detection

Allow traffic to schedule to according to classification and marking. For example: RTP is always service first as it was assigned Precedence 5 and bandwidth will always be reserved to this traffic. Email traffic can be processed normally.

Traffic shaping is an egress function; means it is done for outbound traffic. Usually done to avoid packet loss and delay problem. Policing is (usually) an ingress function and it is used to solve problems related to network capacity and traffic engineering.

It helps to elevate the queue being filled rapidly. It uses techniques such Random Early Detection (RED) and Explicit Congestion Notification (ECN). When RED is used, problem such as TCP global synchronization can be avoided. RED solves this problem by randomly dropping some traffic (based on certain criteria such as IP Precedence). The analogy is simple: drop some random traffic, before congestion occurs, instead of dropping all traffic.

ECN achieves the same goal without dropping traffic. When ECN is enabled, router signals the host to slow down its traffic rate. This is done by setting ECN bits in IP header.

Tools include fragmentation and interleaving and payload and header compression techniques. They directly attack the serialization delay. Fragmentation divides larger packets into smaller chunks. Interleaving allows inserting these smaller packets into the queue to be processed first. For example: VoIP packets are smaller in size. If a file transfer of 1500 bytes packet is already taking place, the 20-byte VoIP packet must wait till FTP packet is completely processed. Fragmentation will allow dividing the FTP packet into smaller chunks and interleaving will then insert the VoIP packet in between.