Each router (or node) must establish an adjacency with neighbors. Each router does so by announcing itself on the link through a Hello Protocol. Once neighbor relationship is established, router can forward to exchange of link information.

Once adjacencies are established, each node sends a data unit called Link State Advertisement (LSA). An LSA on a very basic level includes: 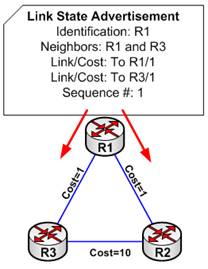 This LSA is then flooded through out the network. Each node receiving the LSA in turn floods to its adjacent neighbors.

Once each node has the complete view of the network, called the Link State DataBase (LSDB), this information is used by SPT to create a graph of network representing a shortest path to each router in the network. The IP routing table is then built from the LSDB. With link state protocols, the best path is always the shortest path. Figure-2 shows the IP routing building process. 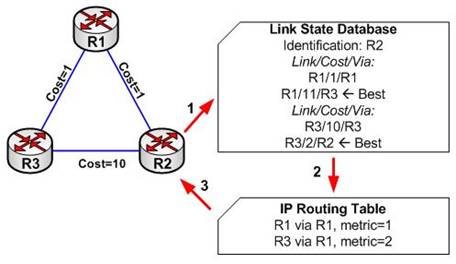