Show commands are used for various purposes such as management, configuration verification and viewing statistics of various protocols and processes in Cisco IOS. To view all the available show commands in Cisco IOS press ? after show. A brief output of show ? is shown in the picture below.

There are more sub-commands in each category, an output of show ip ospf ? shows different show commands that can be used to view various ospf statistics and parameters 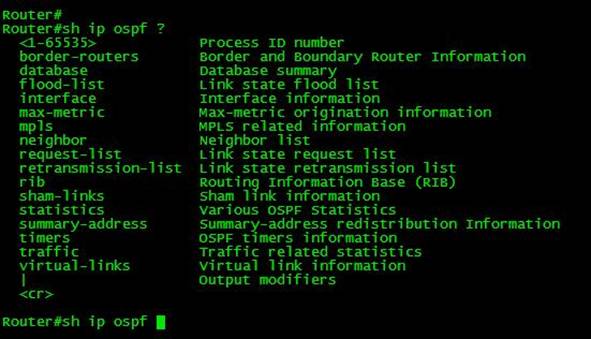 An output of Show ip interface brief command is also shown below, this command is frequently used to monitor the status of an Interface.

Cisco IOS Debug Commands are used for troubleshooting purposes. They display information about various router processes and operations. Using Debug commands information about traffic generated and received by the Router can also be viewed. Cisco IOS treats the Debug process as high-priority and it can consume significant amount of router resources thus extensive debugging in production networks is not encouraged. Debug tools are not recommended to be used for monitoring purposes instead debugging must only be used temporarily for troubleshooting and should be turned off as soon as the issues are identified.

By default Cisco IOS sends debug output to the console, when you want to view the debug output from the telnet session the following command must be specified in the privileged EXEC mode

Debug output may also be redirected to Internal buffer of a Cisco Router or to a Syslog Server. To do so we have to configure message logging using logging command in configuration mode.

Table below shows the logging command options and their explanation

The level keyword specifies message severity levels. There are eight severity levels and logging at a particular level enables logging for that level and all levels below it.

Pressing ? after the debug keyword invokes the Cisco IOS help and all the debug command options are listed.

Figure below shows a debug output when the debug ip packet detail command is used. This command will show packets sourced from the router or destined to the router. To view the debug output of transit packets, Cisco Express Forwarding (CEF) switching must be disabled since debug only show output of process-switched packets. In the figure below the router received an ICMP echo request packet from 10.1.1.2 and it replied with an ICMP echo reply packet.

In this lesson we covered general overview of the Cisco IOS Show and Debug commands. Any Engineer who works with Cisco IOS devices must know the usage of these commands as there are important tools used for troubleshooting issues.