CCNA – What is an Internetwork? 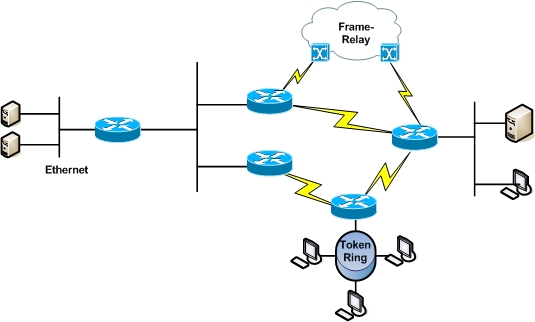 Figure below shows the TCP/IP model that comprises of four layers.

The Internet Layer describes a group of methods, protocols, and specifications which are used to transport datagrams (packets) from a host across network boundaries, if necessary, to the destination host specified by a network address (IP address) which is defined for this purpose by the Internet Protocol (IP). Every machine on the Internet whether it is a host machine accessing services or a server providing services needs a unique IP address which identifies that system on the Internet. IP version 4 (IPv4) is the current version of Internet Protocol being used on the Internet. IPv4 defines a 32-bit address which allows the possibility of 4,294,967,296 unique addresses, however due to the rapid growth of the Internet this space is limited. IP version 6 (IPv6) which is intended to be the successor of IPv4 has a 128-bit address space which vastly larger than IPv4 address space.

All Internet transport protocols use the Internet Protocol (IP) to carry data from source host to destination host. IP is a connectionless or datagram internetwork service, providing no end-to-end delivery guarantees.

The Network Access Layer also known as the Link Layer or the Media Access Layer defines protocols and specifications that must be implemented by the host to communicate with its directly connected network.

When a user issues a command that uses a TCP/IP application layer protocol, a series of events is initiated. The user’s command or message passes through the TCP/IP protocol stack on the local system. Then, the command or message passes across the network media to the protocols on the remote system. The protocols at each layer on the sending host add information to the original data. Protocols on each layer of the sending host also interact with their peers on the receiving host.

The Internet is the most notable example of an Internetwork. Internet is the global network formed by connecting several computer networks across the globe. The individual private and public networks of different sizes and categories, used for different purposes and utilizing a broad array of technologies interconnect together to form the internet. The origins of the Internet date back to 1960s when Defense Advanced Research Projects Agency (DARPA) of the United States developed the ARPANET which is known as the predecessor of the Internet. The ARPANET which was research government military project become commercialized in the 1980s and within a couple of years a rapid expansion and interconnection of several different computer networks led to the Internet.

Key Internet Services, and technologies and protocols that enable these services

Today the Internet has become a globally distributed network that can be accessed from anywhere by numerous means. Over the years the Internet has evolved from a defense research project to global network used for various purposes such as business/corporate communications, social networking and multimedia.

World Wide Web (WWW) is a system of interlinked hypertext documents contained on the Internet. With a web browser, one can view web pages that may contain text, images, videos, and other multimedia and navigate between them by using hyperlinks. Today there are millions of websites on the Internet that provide different types of content, this services is one of the biggest selling points for the Internet. The entire web is supported by the Hyper Text Transfer Protocol (HTTP), an application layer protocol used by web browsers that act as HTTP clients requests information from Web Servers that host websites. A Uniform Resource Locator (URL) is used to identify a Web Site address, HTTP is used to request resources/information from web servers using URLs.

Electronic Mail or in short e-mail is method of exchanging digital messages. Along with the World Wide Web the Email is one of the most popular service offered by the Internet. There are several standards and protocols for the Email system which allows Internet users to exchange messages over the Internet. Simple Mail Transfer Protocol (SMTP) is an Internet standard for electronic mail (e-mail) transmission across Internet Protocol (IP) networks. SMTP is used by Email servers to send and receive mail messages while clients (end-users) usually use Post Office Protocol (POP) or the Internet Message Access Protocol (IMAP) to access their mail box accounts on a mail server.

As mentioned above the Internet is made of up several interconnected networks, at its very edge individual users or corporate private networks connect to the Internet via an Internet Service Provider (ISP), the ISP serves many users through various physical mediums such as Wireless Connections and DSL, these ISP in an Internet Infrastructure are known as Local ISPs. The Local ISP may peer with each other but usually they peer with a regional ISP that interconnects multiple local ISPs, the regional ISP peer with the bigger provider called the Network Service Provider (NSP). However this may not be assumed as true Internet infrastructure as a complete picture of the Internet is difficult to graph due to various peerings, connections and other complexities.

This brings us to the end of this lesson in which we covered the Internetwork and its core underlying technologies.