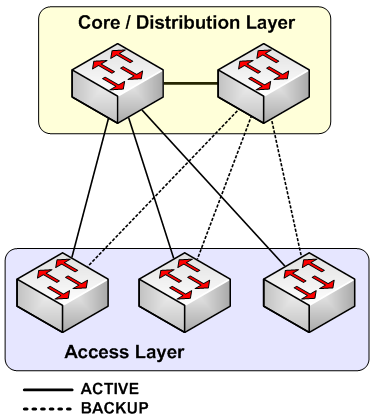 Warning: When uplink fast is enabled, it is enabled for switch as a whole, therefore, for all VLANs. Since it keeps tracks of possible path to root bridge, it is not allowed on Root Bridge. UplinkFast also ensures that the switch never becomes a Root Bridge (RB). UplinkFast ensures by making the priority to be raised to 49,152 and port cost is incremented by 3000, making the switch un-desirable to be the root bridge.

In normal STP behavior, switch receiving the (inferior) BPDU must wait the STP Max Age Timer to expire before responding. In case of BackboneFast, the switch proactively determines other alternative paths to Root Bridge. This proactive behavior is due to Root Link Query (RLQ) protocol.

BackboneFast must be enabled on entire STP domain on every switch.

This brings us to the end of this article in which we learned two very essential STP optimization techniques that are used to speed up convergence due to direct and indirect link failure. The configuration of both uplinkfast and backbone is very simple but you must understand the indepth workings of boths of them.