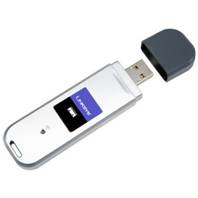 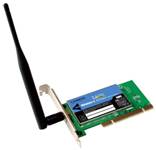 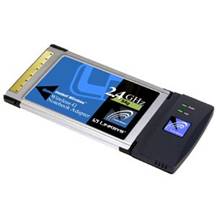 Wireless NICs is the device able to send and receive RF signal. Wireless NICs are used by users wanting to connect to a wireless access point or router. Wireless NICs is similar to an Ethernet NIC, but instead of attaching a cable to it, it uses the configured modulation technique and encodes a data stream onto an RF signal.

Wireless NICs are most often associated with mobile devices, such as laptop computers and mobile phones. In the late 1990s, wireless NICs used for laptops were usually PCMCIA cards (right picture). These days, almost every laptop has a wireless NIC integrated right into it and they do not require a PCMCIA card anymore. The wireless NIC is not visible because there’s no requirement to attach a cable or anything else to it. However, those cards are still manufactured for low-end laptops.

Wireless Access Points (APs) connect wireless clients to the wired LAN. Clients do not communicate directly with each other, instead they communicate with the AP and the AP converts the frames from the 802.11 encapsulation format to the 802.3 Ethernet frame format. Before communicating to the other clients in a network, a wireless client must associate (join) to the wireless network. This process is similar to attaching a cable to your NIC into a wired LAN.

APs are Layer 2 devices that act like an 802.3 Ethernet hub. Unlike Ethernet NICs, wireless NICs do not send and receive at the same time, making collision detect impossible, but are designed to avoid them. 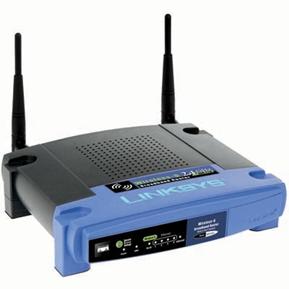 Wireless routers perform the role of access point, Ethernet switch and router. Wireless routers are really all-in-one devices. For example, the Linksys WRT54GL, used in many SOHO environments, provides an access point, a four-port, full-duplex, 10/100 Ethernet switch and the router functions making it act as a gateway to connect to other networks, such as the Internet, for both wired and wireless clients.

We hope you enjoyed this Cisco CCNA topic. It is important to understand the hardware components of wireless networks because many networks have been extended to support wireless technologies and someday you may be required to extend such a network. Knowing the required components for a Wireless LAN to work will ease your work.