In Ad hoc mode two or more computers communicate directly with each other without the need for a central device.
802.11 defines a Basic Service Set (BSS) as the basic building block of an 802.11 wireless LAN. The BSS consists of a group of any number of stations that can communicate with each other, since two or more devices do not need a central device to communicate with each other this is known as an Independent Basic Service Set. An advantage of Ad hoc mode is that it can be set up easily and quickly and does not require any pre-planning or site-survey. A few drawbacks of Ad hoc mode are that it is relatively less secure, coverage is limited and there is no option to link to a wired LAN. Figure below shows a Wireless LAN in Ad Hoc operation mode. 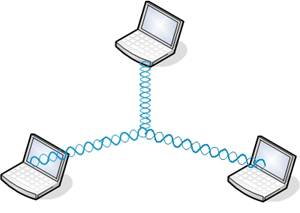 After a client has associated itself with the Access Point, all communications to and from the client will traverse the AP.
The wireless coverage area of an AP is called the Basic Service Area (BSA), sometimes also referred as Wireless Cell. An AP can also be connected to a wired Ethernet Local Area Network through an uplink port connection and thus this mode also allows a connection to wired network unlike the Ad hoc mode in which the wireless network cannot be connected to the wired network. Infrastructure mode supports two sets of services, called service sets which are mentioned below

Although not shown in the figure an Access Point can act as a bridge between the wireless and wired LANs, allowing stations on either LAN to communicate with each other

Today we learned modes of operation of a Wireless Local Area Network and discussed the difference between the two modes and what are the advantages and disadvantages of each. It is very important that you understand the basic building blocks of the Wireless LAN in order to understand the advanced technologies.