CCNA Voice: Functions of Voice Ports in a Gateway 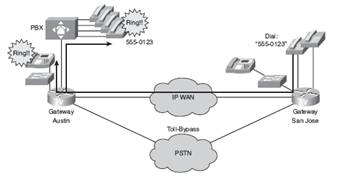 Off net calls – To get access to a PSTN line, user enters access code e.g. 9 from a telephone device connected to a voice enabled cisco router/PBX. It is usually a single analog connection via Foreign exchange office (FXO) port / digital T1/E1 connection. The call is routed via a voice enabled cisco router which is acting as gateway to the PSTN network. Figure 3 illustrates off net call setup.

PLAR calls – These calls connect a telephone device to secondary telephone device when the first telephone device goes off hook. In this type of connection user will not get a dial tone because the voice enabled cisco router is preconfigured with a specific number. PLAR connection works between any type of signaling or any combinations of digital or analog interfaces. It is mainly used in customer servicing facilities. Figure 4 illustrates a PLAR call setup.

PBX – PBX calls – These calls originate at PBX at one site and terminate at a PBX at another site using the network as means of transport between two locations. Migration from converged voice and data network, the tie trunks connecting sites of same organization can be emulated across an IP network. In this scenario call is sent from local PBX, thru a voice enabled voice router and terminated on the remote office PBX. Figure 5 illustrates a PBX to PBX call.

Voice ports on routers emulate physical telephony switch connections so that voice calls can be transferred between packet network and device. The signaling information needs to be sent across which is handled by installation of hardware device or by configuring the voice port which connect to telephony devices. Voice ports on gateways connect the router, access server or call control devices via signaling interfaces. These signaling interfaces generate information related to state of call such as on hook status, ringing and line seizure.

The voice port hardware or software will be configured to transmit and receive the similar type of signaling being used by the device to be interfaced to exchange calls smoothly between voice networks. Figure 8 illustrates the voice ports setup/ usage. 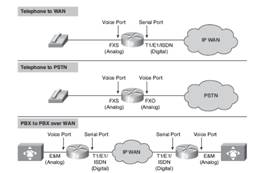 An FXS interface is used to connect an end user device to the router or access server. The FXS interface supplies ring, voltage and dial tone to station and has an RJ-11 connector for telephone equipment, PBX etc. FXS port usually function with default settings most of the time in USA which may not be true in case of other countries.

FXO is used for trunk, tie-line or connection to a PSTN CO or to a PBX. The RJ-11 modular telephone cable connects the FXO voice interface card to the PSTN or PBX via a telephone wall outlet.

E&M – Trunk circuits connect telephone switches to each other instead of end user equipment. An E&M interface uses special signaling path that are separate from the trunk audio path to send information about the calls.