Traditional telephony systems were based on analog signal/transmissions.  An analog signal uses some property of the medium to convey the signal’s information. Analog based phone lines rely on properties of electricity to communicate changes in voice over the cabling.  But sending voice is not just the part of signaling it involves signaling of different types depending on the requirements like dial tone, digits to be dialed, busy, unreachable signal, and so on.  Router voice ports and access servers have physical connectivity to telephony devices such as telephones, fax machines, PBXs and PSTN CO switches.  These devices require indicating information on on-hook status, ringing, line capture and so on by using several signaling interfaces.  We will learn about different types of signaling types in the world of traditional telephony space in the subsequent sections of our CCNA Voice studies.

Supervisory – Detects change to status of loop or trunk. A predetermined response is generated when change is detected such as loop can close to connect call.

Addressing – Passing dialed digit to a PBX or CO.

Informational – Provide auditable response tone to caller to indicate status of connection such as busy, line busy and so on.

Loop Start and Ground Start Signaling – Analog circuit comprises of pair of wires commonly known as tip and ring. TIP is the ground wire or positive side and ring is battery or negative side of analog connection.  There two wires power the analog line.  Figure 1 illustrates TIP and RING connections.

Figure 1: tip and ring connections on an analog circuit 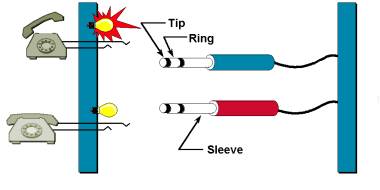 Whenever phone is on hook, the two wires are separated which prevent flow of electric circuit via the phone. Whenever phone is off hook the connection is made and electrical signal (48 V DC voltages) flows through the phone company central office (CO) into the phone line and this is referred as loop start.

In Loop start signaling party gets a dial tone by closing (shorting) a DC current loop.  Loop start signaling is often susceptible to problem of “glare” which impacts more in case of business environments where the call volumes are high.  Glare occurs when a call comes in on the analog line from the central office at the same time the PBX wants to snatch the same line to for an outgoing call.  Problem of glare is not of any significant concern in case of home environments because due to low volume of calls chances of having incoming/outgoing simultaneously is very low.   Additionally, if an incoming call is coming into the home phone, it is usually meant for your home apart from in case it is a wrong number.

But in case of business environments glare could cause a major concern because it might be possible that loop start signal seize the outgoing PSTN line while receiving an incoming call on the same PSTN line.

To eliminate the problem of glare with loop start signaling, large corporate PBX systems use ground start signaling. The ground start protocol was designed to eliminate this problem with glare.  From the PBX side, the RING lead is grounded first, then the central office circuit must ground the TIP lead before the PBX can close the loop between TIP and RING.  This type of signaling system allows separation of incoming phone line, thereby reducing problem of glare.  To receive dial tone from the CO PBX will send a ground signal and that signals the telephone company that an outgoing call is about to be initiated, and it does not just connect the wires in case of loop start signaling for incoming/ outgoing call.

Supervisory Signaling – Multiple types of signaling are supported by analog lines apart from generating voice traffic using properties of electric signals.  In a loop start on-hook and off-hook condition in a voice network is indicated by supervisory signaling.  This signaling technique could be applied to any of the conditions mentioned below:

In the event of idle state, the telephone, PBX, or FXO module has an open two wire loop.  It could be telephone set with handset on-hook, or PBX or FXO module that generates an open between the TIP and RING lines.  The CO or FXS waits for a closed loop that generates a current flow.  The CO or FXS have a ring generator connected to the tip line and –48VDC on the ring line.

Ground start signaling is also supervisory signaling technique as it provides a way to indicate on-hook or off-hook state in a voice network.  When a call is originating from a PBX or FXO – a PBX or FXO grounds the ring line to signal to the CO / FXS that there is an incoming call.  The CO or FXS senses the ring ground and then grounds the tip to let the PBX or FXO know that it is ready to receive the incoming call.  The PBX or FXO senses the tip ground and closes the loop between the tip and ring lines in response.  It also removes the ring ground.  This process completes the voice connection to the CO or FXS, to initiate voice communication.

Informational /Progress Signaling – When an off-hook signal is generated the informational signaling is used to generate a dial tone, specific electronic frequencies are used to send multiple pieces of information to the caller. There could a long list of events that could occur due to result of signaling:

All these informational signals are generated telephone companies on standard frequencies and they should be same for all analog phones within the country.

Address Signaling – In order to convey address information address signaling is used.  In the dialing phase caller enter a phone number of a telephone at another location and this number is entered with a rotary or a touch tone phone.  Here are two commonly used address signaling techniques as under below – dial pulse (DP) and dual tone multifrequency (DTMF).

Dual Tone Multifrequency (DTMF) – signaling is used for telecommunication signaling over analog telephone lines in the voice-frequency band between telephone handsets and other communications devices and the switching center.  The dial pad of phone uses two frequencies (low and high electrical frequencies) to generate a signal when a button is pressed on the keypad.  The table 1 below lists frequency tones generated by dual tone multifrequency (DTMF) dialing.

Pulse Dial – also called rotary or decadic dialing, is pulsing in which a direct-current pulse train is produced by interrupting a steady signal according to a fixed or formatted code for each digit and at a standard pulse repetition rate. The pulses are generated through the making and breaking of the telephone connection. These phones have a rotating disk to dial a number and the exchange equipment count circuit interruptions to determine which number is called.