In order to establish standard means of communication across disparate systems, the OSI model is often referenced, similar to OSI model; Cisco had derived its own model to describe voice communications. 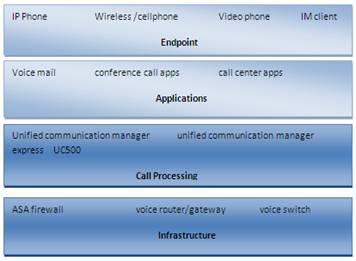 It is the foundation layer of the voice network and it is the last layer in the model.  The role of infrastructure layer contains devices that build the base of data network.  Commonly used devices at this layer include – routers, switches and voice gateways, this includes the interfaces, devices, and features necessary to integrate VoIP devices, legacy PBX, voicemail, and directory systems, and to connect to other VoIP and legacy telephony networks.  This would include Cisco voice gateways (non-routing, routing, and integrated), Cisco IOS and Catalyst switches, and Cisco routers, as well as security devices, such as firewalls, virtual private networks (VPNs), and intrusion detection systems.

In the preceding, paragraphs we will learn about role of each of the devices at infrastructure layer and how they function.  Setting up UC network would require routers, switches, and optionally security appliances like ASA firewall to provide network connectivity.

A voice switch is a high density voice service which high capacity and reliability for voice over IP (VOIP) services.

Important data traffic, voice and often video traffic travelling over IP networks needs to be secured. So at infrastructure layer level security devices like firewalls, network instruction detection and prevention systems, VLANs and such are deployed.

Now we have understood the role of various devices that operate at infrastructure layer, we will look at functionality provided by this foundation layer.

Typical functions of infrastructure layer are outlined below which we will be describing in detail for better understanding of CCNA Voice exam concepts:

Voice and video transmissions/traffic are highly sensitive and time bound in nature, therefore voice and video infrastructure needs to ensure smooth and guaranteed delivery.  Special mechanisms are incorporate at infrastructure layer to ensure the quality and safety of the media in a voice enabled IP network which includes the following:

Redundancy and QoS is two critical components of infrastructure. Traditional PBX systems have about .5% of downtime annually. To achieve same level of redundancy in a converged network, network infrastructure , lighting speed failover should be provided by devices at infrastructure layer and Qos will ensure that data traffic is not disturbed at the same time maintain the quality of voice traffic.

As network administrator you can use QoS to minimize the effects of loss, delay and delay variation.  This enables classification, scheduling, policing and shaping of traffic to ensure quality of transmission in voice / video communication.

During classification a packet is marked with a specific value for scheduling purpose.

Scheduling determines how traffic will leave the device, in case traffic enters a device at a faster pace than it can exit, this is controlled via a congestion point.  Scheduling uses buffers to hold low priority traffic and allows high priority traffic to exit early.

Policies and shapers determine how to respond to traffic violations; a policy could be set to drop traffic whereas a shaper will use buffers to hold packets and shape the flow when data rate from source is higher than device can handle.

High availability/redundancy are another important and crucial component of VOIP traffic especially in case of networks that carry voice/video both.  Network redundancy can be built using redundant hardware such as processors, line cards, links, core switches.  Hot swappable voice cards should be used for replacement without causing disruption to network.  At software level the behavior of protocols control how to handle failures and provide rules to reroute packets and reconfigure alternate paths.

Multicasting is an important feature of VOIP networks as it gives the capability to deliver data to multiple hosts which need to receive same data at the same time, such as conferencing for voice or video.  It does streaming of audio, video and slides to large number of users simultaneously across a network.  These packets are replicated in the network with devices operate at infrastructure layer such as routers and switches which are enabled with multicasting capabilities.

I hope this lesson would be informative for our CCNA Voice exam readers as it gives insight into role of devices that operate at infrastructure layer and they have also introduced with certain important concepts of VOIP networks such as QoS, high availability, security and multicasting capabilities.  In the next CCNA Voice topic, we will learn about other componets of the Cisco Voice Communication Layer and will understand their function and dependency on infrastructure layer.