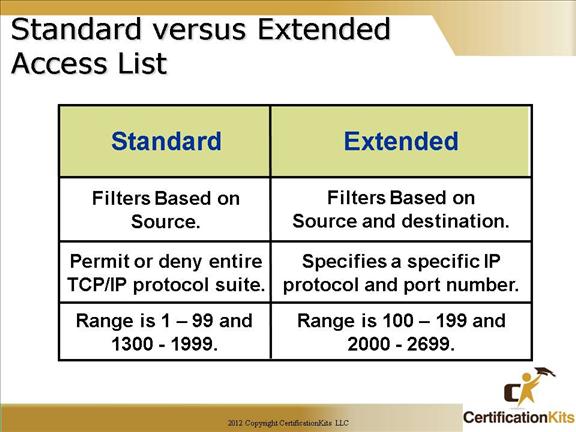 These use only the source IP address in an IP packet as the condition test.  All decisions are made based on source IP address.  This means that standard access lists basically permit or deny an entire suite of protocols. They don’t distinguish between any of the many types of IP traffic such as WWW, telnet, UDP, etc.

Extended access lists can evaluate many of the other fields in the layer 3 and layer 4 header of an IP packet. 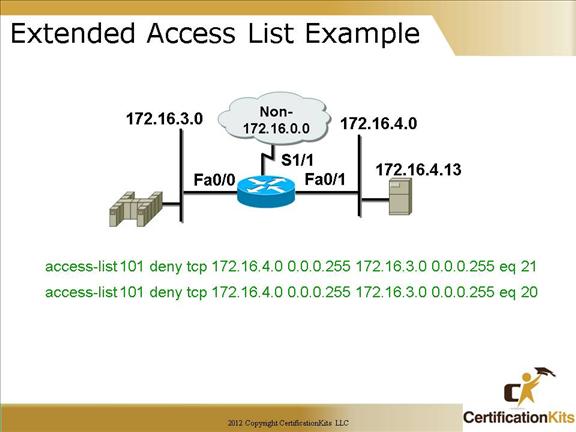 It denies FTP (port 21 is FTP and port 20 is FTP data) from subnet 172.16.4.0 to 172.16.3.0.  Actually since there is an implicit DENY at the end of each access list, this access list denies all packets since there is NOT a permit statement.  Note: If access list 101 were applied to an interface, all traffic either inbound or outbound (depending on how the ACL was applied) would be denied.

As a general rule, all ACLs should have at least 1 permit rule. 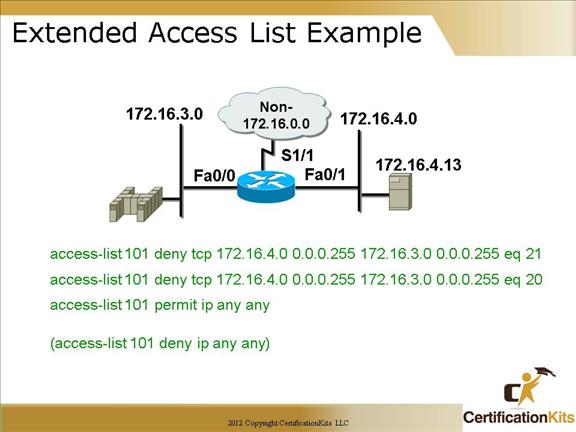 Taking the previous example a little further, it the intent of the ACL is to deny FTP from 172.16.4.0/24 to 172.16.3.0/24 but permit all other traffic then the following permit statement needs to be added after the deny statements:

access-list 101 permit ip any any

Remember there is an implicit deny ip any any at the end of every ACL. 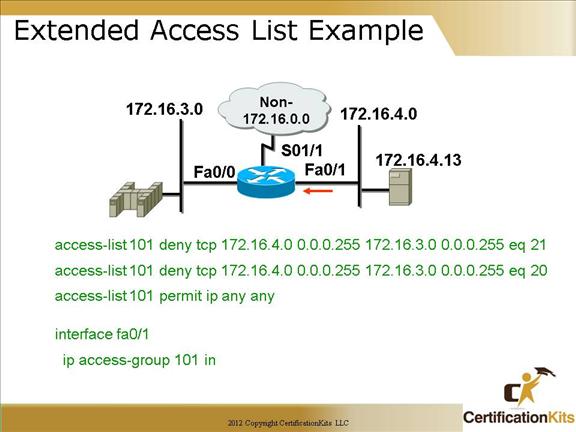 Now that the ACL has been defined, it needs to be applied to an interface.  As stated on the previous slide, it can be applied with to fa0/1 in the inbound direction or fa0/0 in the outbound direction. 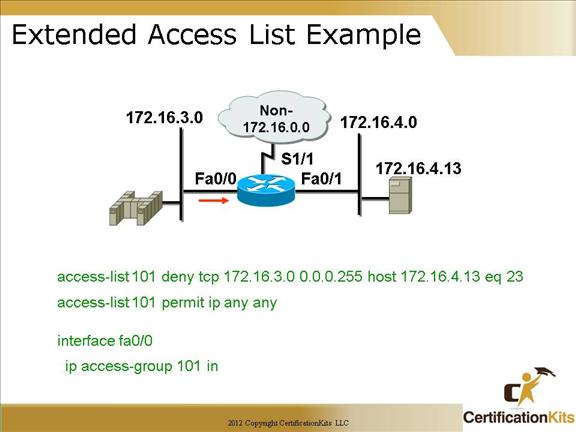 This slide demonstrates an extended access-list that will deny any source address from network 171.16.3.0 telnetting to host 172.16.4.13.  Note: TCP port 23 equates to telnet.  There is a permit ip any any at the end of the deny so all traffic other than the specified telnet is allowed.  Again, since the ACL is an extended ACL it is applied as close to the source as possible. 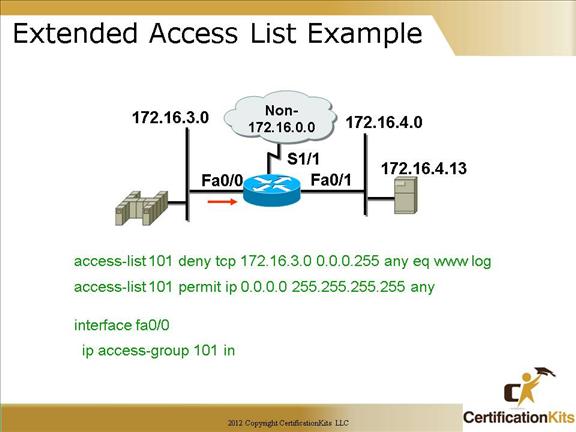 This slide demonstrates an extended access-list that will deny any host from network 172.16.3.0 from using HTTP to any destination.

This example demonstrates the use of pre-defined port numbers.  In the example www equates to port 80 which is the default port utilized from a browser when performing http. 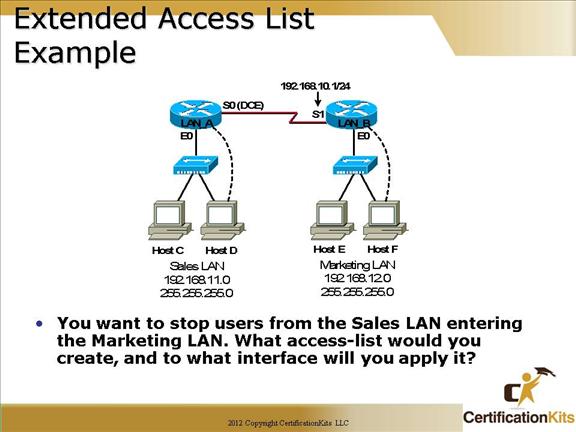 access-list 110 permit ip any any 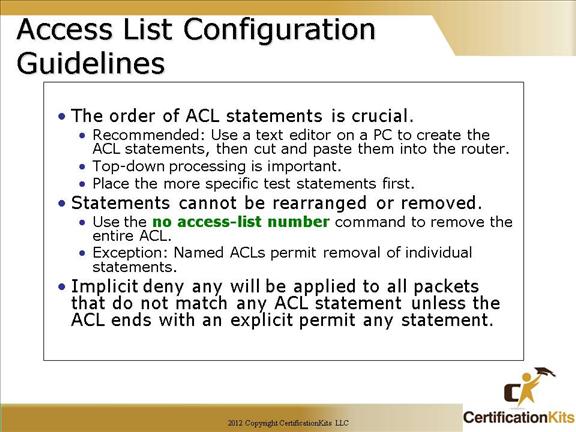 Place the most restrictive statements at the top of list.

Access lists filter traffic going through the router; they do not apply to traffic originating from the router. 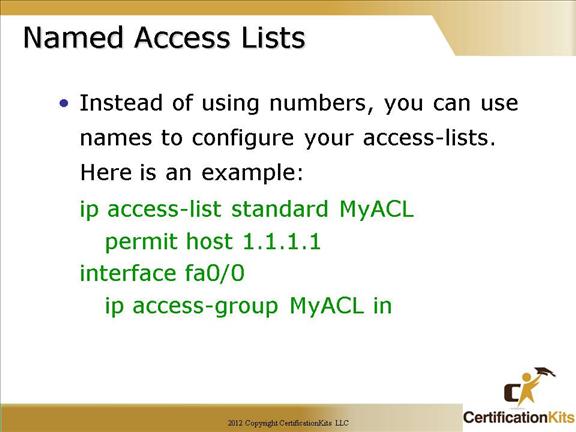 There is nothing new or different about these access lists aside from being able to refer to them in a way that makes sense to humans. 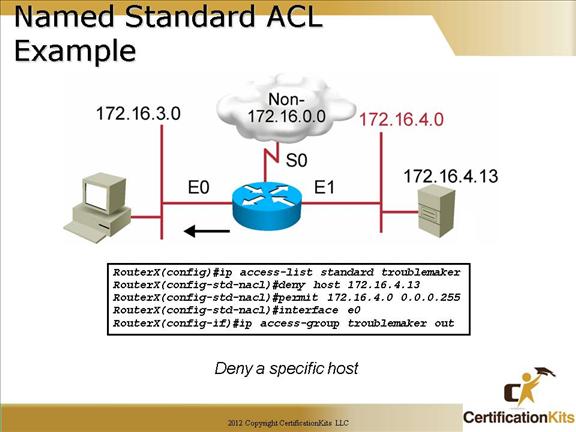