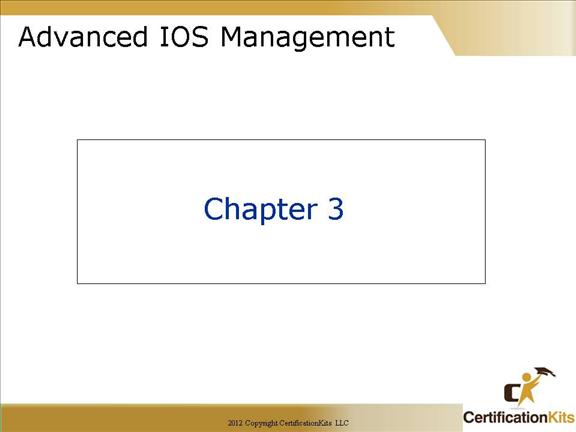 In this chapter, you will learn how to manage Cisco routers on an internetwork.

The Internetwork Operating System (IOS) and configuration files reside in different locations in a Cisco device, and it’s important to understand where these files are located and how they work.

You’ll also learn about the main components of a router, the router boot sequence, and the configuration register.

Cisco CCNA Router as a Computer 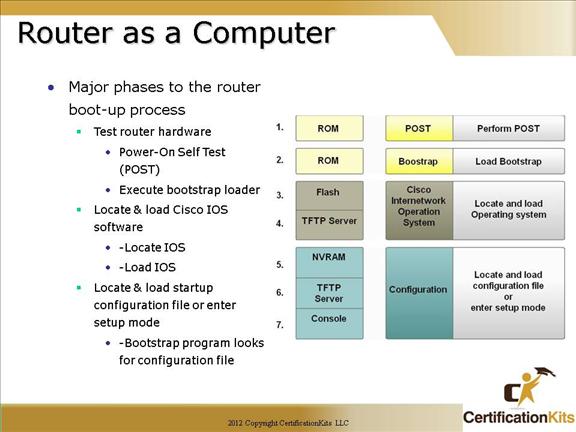 Router components and their functions: 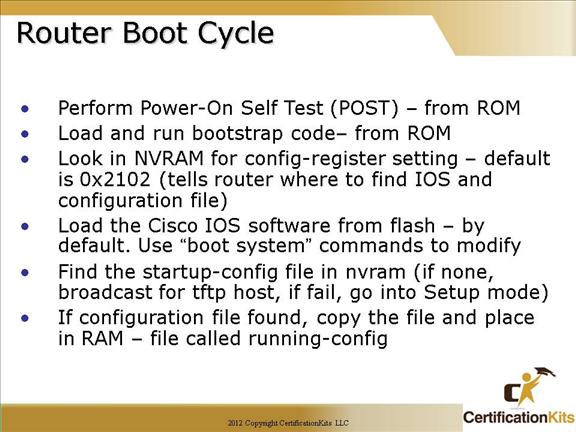 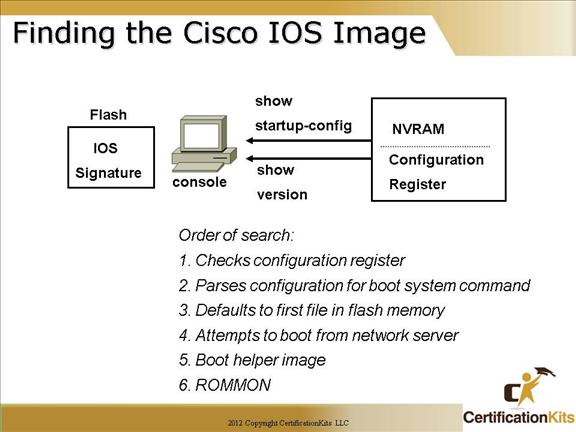 A router needs an IOS image in order to boot.  In order to find an IOS image it first checks the configuration register.  This will tell it whether to read the startup configuration file if it exists.  If a startup file exists, it is parsed for a possible boot system command.  If a boot system command does not exist, the router defaults to the first file on flash memory.  If no valid IOS version exists on flash memory, the router attempts to boot over the network from a boot server.  If that fails, the router will attempt to boot from a helper image.  If all else fails it will enter ROMMON mode. 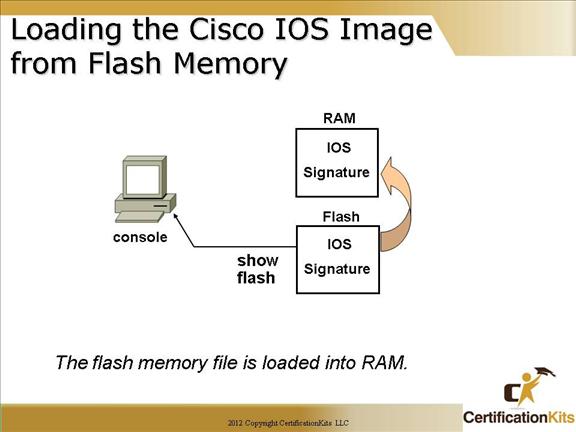 When a router is booted and there is a valid IOS image store on flash memory, that IOS image is copied into RAM where it is utilized for operation of the router.

When the router is up and running you can perform a “show flash” command to display what IOS images are currently resident on flash. 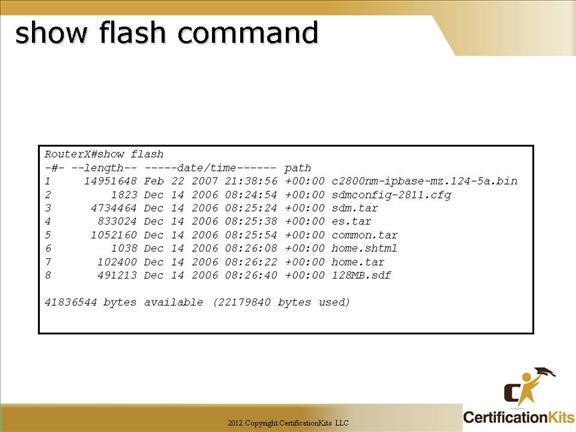 The “show flash” command displays contents of flash memory.  It displays the image filename along with size and date/time created.

Prior installing a new IOS image you may need to erase an existing image in order to make room for the new image.  You can determine this by looking at the last line of the “show flash” command as it displays how much flash memory if available along with how much is already used. 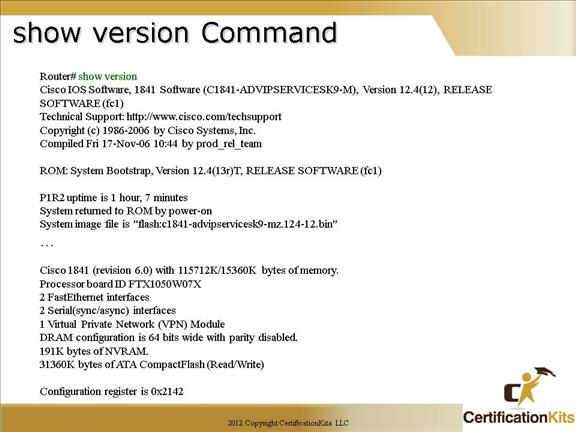 The “show version” command will provide basic configuration for the system hardware as well as the software version, the names and sources of configuration files, and the boot images .

Cisco CCNA Backing up / Restoring the Cisco IOS and Configuration 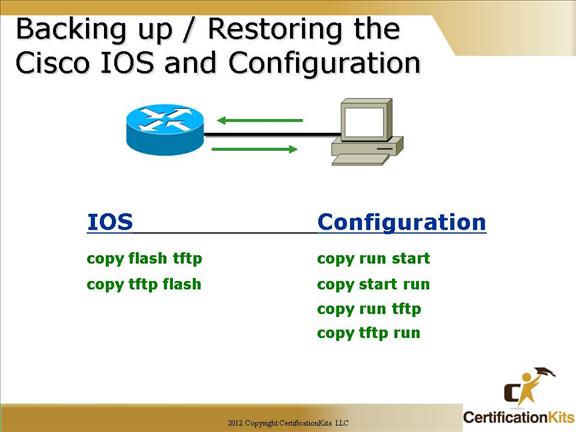 This slide lists the various commands that can be used to both backup and restore the IOS and configuration of a device.

Each of the commands listed on the slide will be covered in more detail on subsequent slides. 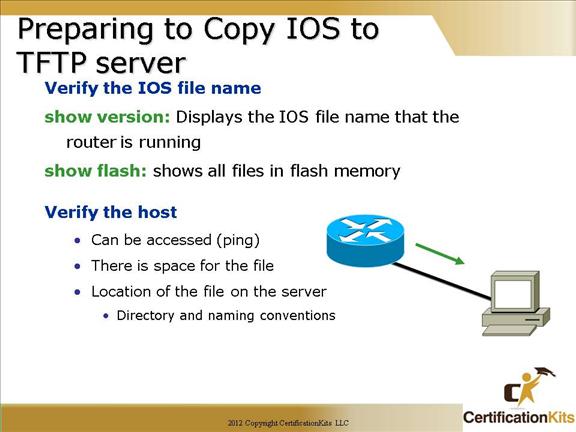 Before you upgrade or restore a Cisco IOS, you really should copy the existing file to a TFTP host as a backup just in case the new image crashes and burns.

You can use any TFTP host to accomplish this. By default, the flash memory in a router is used to store the Cisco IOS.

But before you backup an IOS image to a network server, you’ve got to do these three things:

-Ensure the network server has adequate space for the code image.

On unix-based TFTP servers it may be necessary to create the file using the ‘touch’ command, and change the file security properties by doing a ‘chmod’ command. 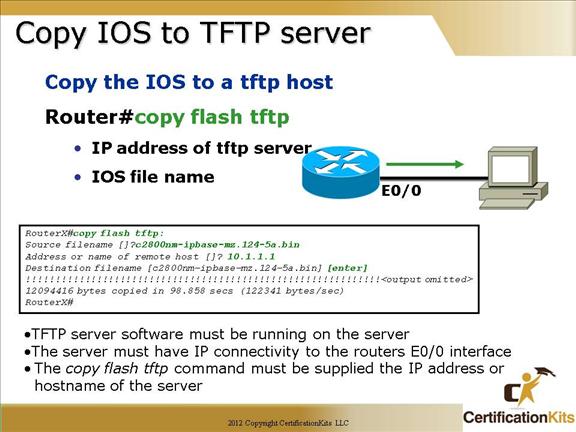 To back up the Cisco IOS to a TFTP host, you use the “copy flash tftp” command.  It’s a straightforward command that requires only the source filename and the IP address of the TFTP host.

The key to success in this backup routine is to make sure that you’ve got good, solid connectivity to the TFTP host.  Check this by pinging the device from the router prompt.

Backing up IOS to the TFTP server is a good practice since in many cases, the IOS will need to be erased to support an upgrade.  If problems are incurred with the upgrade, having the image on a TFTP server will make restoring the image much easier than having to locate and download it again.

The full syntax is:

You can also use ftp versus tftp using the following syntax: