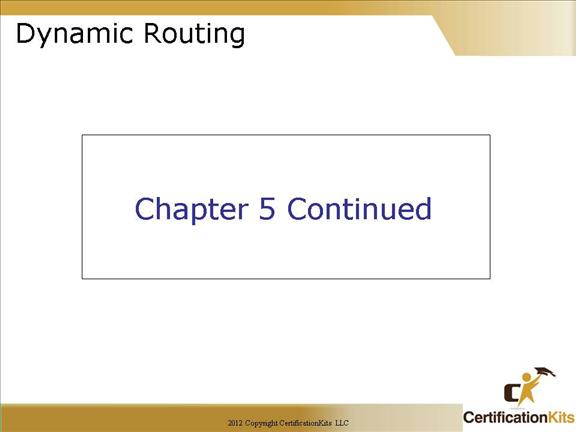 A routing protocol defines the set of rules used by a router when it communicates between neighbor routers.

Cisco CCNA What is a Routing Protocol? 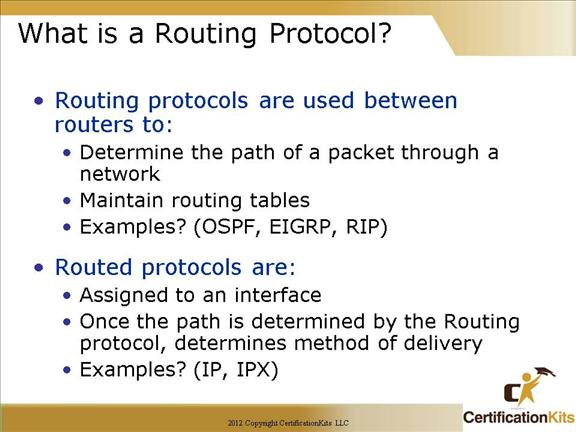 A routing protocol is used by routers to dynamically find all the networks in the internetwork and to ensure that all routers have the same routing table (also referred to as the routing table being converged). 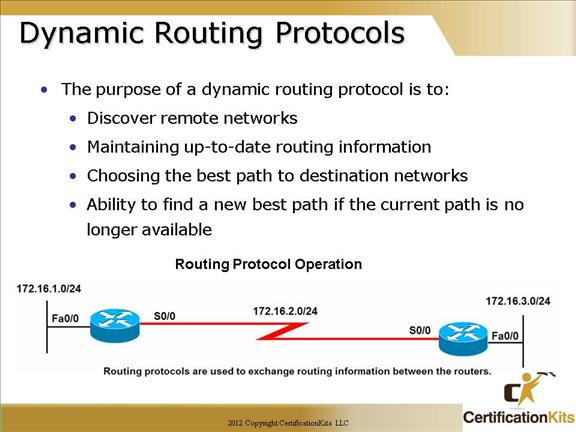 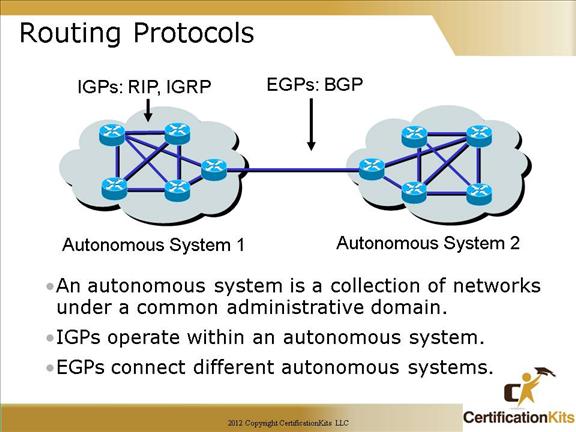 IGPs are used to exchange routing information with routers in the same autonomous system (AS). An AS is a collection of networks under a common administrative domain, which basically means that all routers sharing the same routing table information are in the same AS.

EGPs are used to communicate between ASs. An example of an EGP is Border Gateway Protocol (BGP), which is not part of the CCNA course but rather part of the CCNP course. 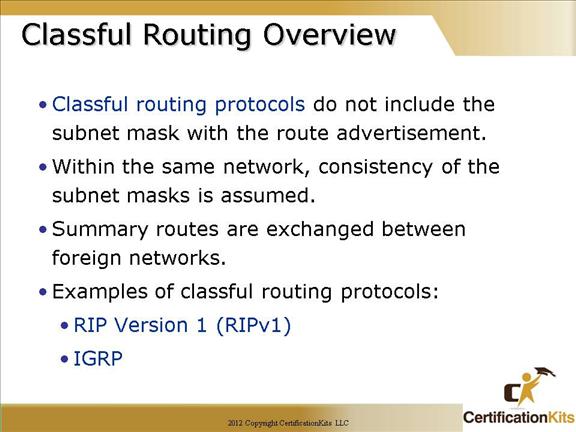 Classful routing is used in routing packets based upon the class of IP address, Class A, B and C.

Classful routing is a consequence of the fact that routing masks are not advertised in the routing advertisements generated by distance vector routing protocols.  In a classful environment, the receiving device must know the mask associated with any advertised subnets or those subnets cannot be advertised to it. There are two ways this information can be obtained:

• Share the same routing mask as the advertising device

• If the routing mask does not match, this device must summarize the received route a classful boundary and send the default routing mask in its own advertisements. 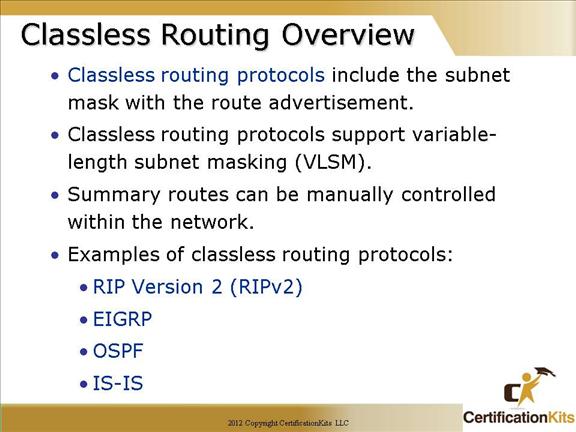 Classless routing, defined in RFC 1817, allows for the routing of non-octet boundary subnets and greatly increases the usage of the existing IPv4 address space.

The following example will explain Classless routing utilizing a Class C address.  Classless routing describes the process of splitting and routing the Class C space into multiple subnets. Assume we want to allocate and route a subnet capable of having 32 addresses and starting at address 64 (last octet), in the Class C address range 192.168.1.0. This could be written as:

To simplify the process of writing this, a short-form (sometimes called the ‘slash’ form officially an IP Prefix) ‘/x’ is used, where x defines the number of contiguous bits in the subnet mask. So the above could be written as:

Remember that the first address in the subnet is reserved for the network or subnet and the last address is the broadcast address to you really have 30 usable addresses for host addresses. 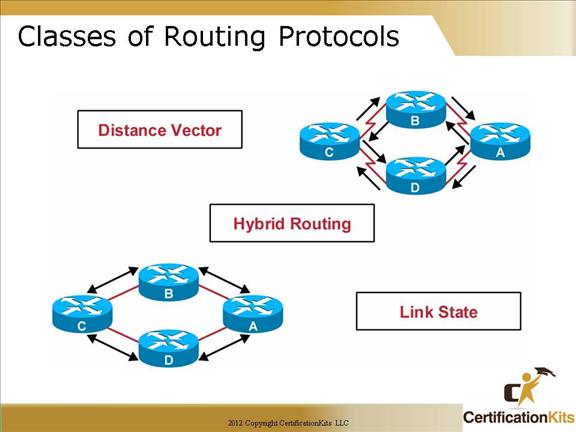 There are three classes of routing protocols:

Distance vector: The distance-vector protocols find the best path to a remote network by judging distance. Each time a packet goes through a router, that’s called a hop. The route with the least number of hops to the network is determined to be the best route. The vector indicates the direction to the remote network. Both RIP and IGRP are distance-vector routing protocols.  RIP uses hop count as a metric while IGRP uses an algorithm that takes into account bandwidth, delay, load, reliability and mtu.  They send the entire routing protocol to directly connected neighbors.

Link state: In link-state protocols, also called shortest-path-first protocols, the routers each create three separate tables. One of these tables keeps track of directly attached neighbors, one determines the topology of the entire internetwork, and one is used as the routing table. Link-state routers know more about the internetwork than any distance-vector routing protocol. OSPF is an IP routing protocol that is completely link state. Link State protocols send updates containing the state of their own link to all other routers on the network. 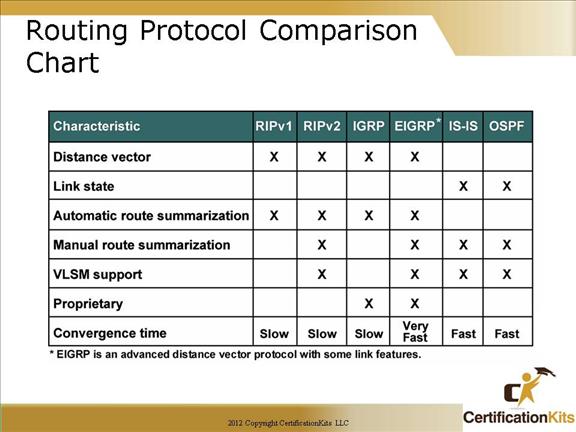 This slide shows the various routing protocols available and their characteristics.

RIPv2 is exactly like RIPv1, except that it send out subnet mask information with the route table updates. This allows RIPv2 to support VLSM networks and discontiguous networks.  Another difference is that RIPv2 sends out updates via IP multicast where RIPv1 sends out updates via broadcast.

Also note that IGRP and EIGRP are Cisco proprietary routing protocols so they only work with other Cisco devices.

Remember that while faster to converge, link state protocols are more CPU intensive than other routing protocols. 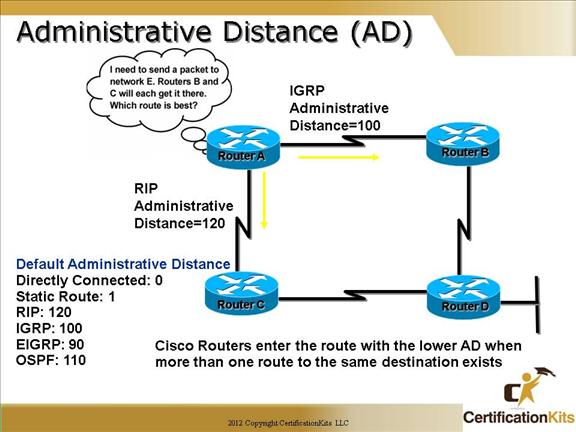 If a router receives two updates listing the same remote network, the first thing the router checks is the AD. If one of the advertised routes has a lower AD than the other, then the route with the lowest AD will be placed in the routing table. 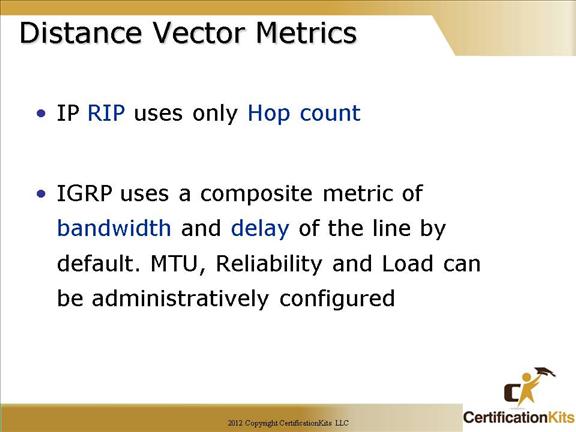 Metrics are used to determine the best path to a remote network if more then one path exists.

RIP uses hop count as a metric where each hop the metric gets incremented by 1 and a metric of 16 is considered unreachable.  So as you can see, RIP does not scale to large networks.

IGRP utilizes a composite metric of bandwidth and delay by default.  This metric scale to large networks but IGRP is still a classful routing protocol so utilizing IP address space efficiently is not possible.