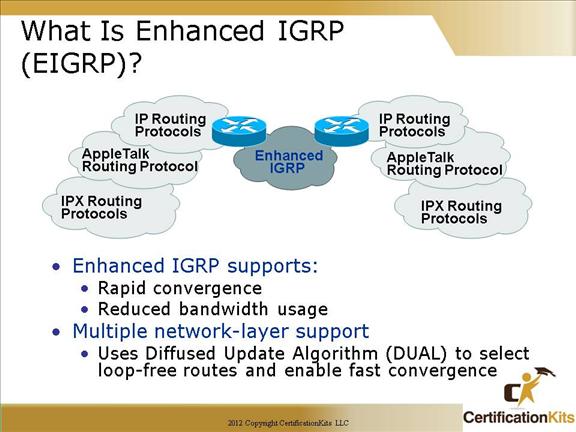 In this section, you’ll see the many features of EIGRP and describe how it works, with particular focus on the unique way it discovers, selects, and advertises routes.

EIGRP utilizes Diffused Update Algorithm (DUAL) which is fast to converge and which guarantees loop-free routes.

There are a number of powerful features that make EIGRP  a real stand out from IGRP and other protocols. The main ones are listed here:

üSupport for IP, IPX, and AppleTalk via protocol-dependent modules 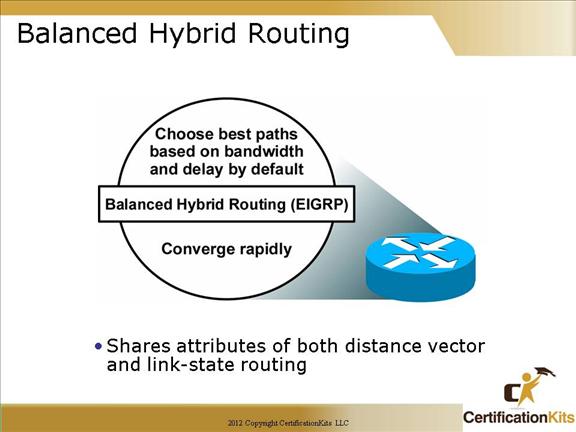 Emphasize: Indicate how balance hybrid protocols such as Enhanced IGRP operates with elements of both distance vector and link-state routing protocols. 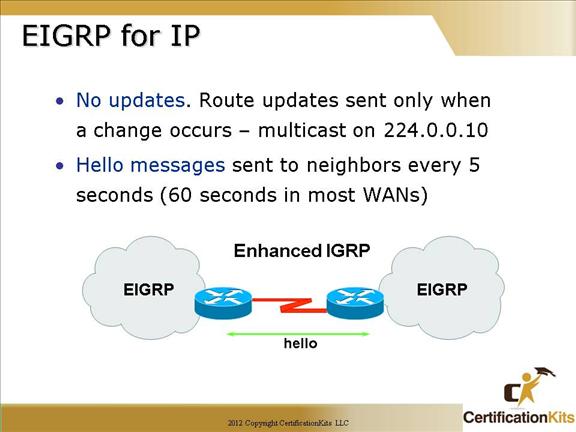 EIGRP doesn’t send link-state packets as OSPF does; instead, it sends traditional distance-vector updates containing information about networks plus the cost of reaching them from the perspective of the advertising router.

EIGRP has link-state characteristics as well—it synchronizes routing tables between neighbors at startup, and then sends specific updates only when topology changes occur to multicast address 224.0.0.10.  Hello messages are sent to neighbors every 5 seconds in a LAN environment and every 60 seconds in a WAN environment.

EIGRP can be configured to route for IP, IPX, and AppleTalk.  This course only focuses on IP. 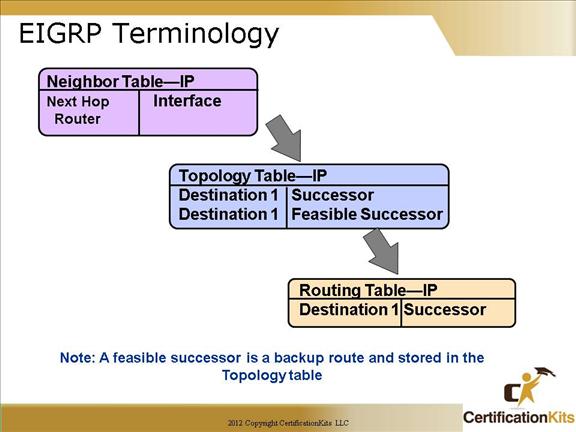 The neighborship table (usually referred to as the neighbor table) records information about routers with whom neighborship relationships have been formed.

The topology table stores the route advertisements about every route in the internetwork received from each neighbor.

The route table stores the routes that are currently used to make routing decision. There would be separate copies of each of these tables for each protocol that is actively being supported by EIGRP, whether it’s IP, IPX, or AppleTalk. 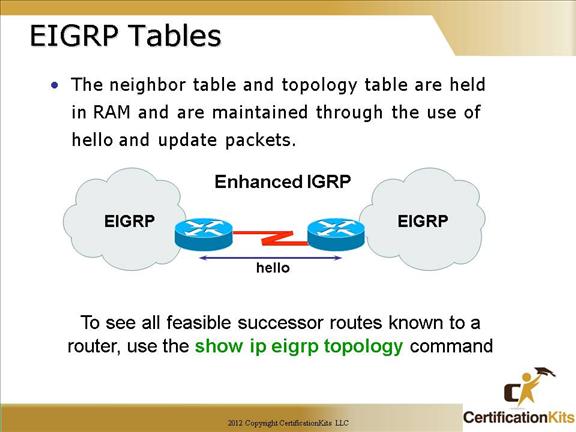 The neighbor table and topology table are held in RAM and are maintained through the use of hello and update packets.

ip-address – (Optional) IP address. When specified with a mask, a detailed description of the entry is provided.

all-links – (Optional) Displays all entries in the EIGRP topology table.

pending – (Optional) Displays all entries in the EIGRP topology table that are waiting for an update from a neighbor or are waiting to reply to a neighbor.

summary – (Optional) Displays a summary of the EIGRP topology table. 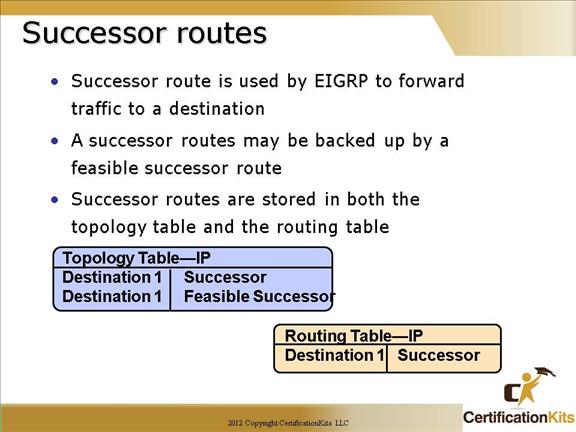 Successor route is used by EIGRP to forward traffic to a destination.

Successor routes are stored in both the topology table and the routing table.

When a router discovers a new neighbor, it records the neighbor’s address and interface as an entry in the neighbor table. One neighbor table exists for each protocol-dependent module. When a neighbor sends a hello packet, it advertises a hold time, which is the amount of time that a router treats a neighbor as reachable and operational. If a hello packet is not received within the hold time, the hold time expires and DUAL is informed of the topology change. 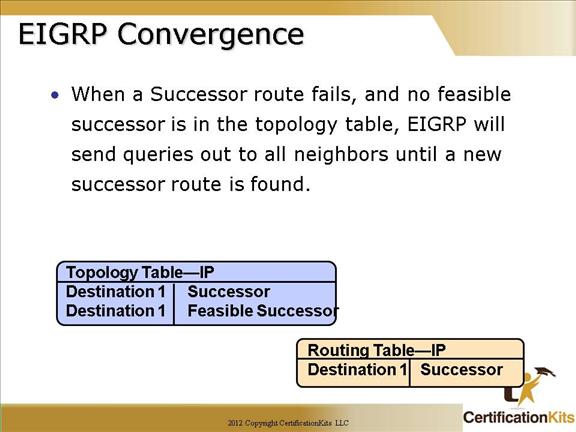 EIGRP supports internal and external routes. Internal routes originate within an EIGRP Autonomous System (AS). Therefore, a directly attached network that is configured to run EIGRP is considered an internal route and is propagated with this information throughout the EIGRP AS. External routes are learned by another routing protocol or reside in the routing table as static routes. These routes are tagged individually with the identity of their origin. 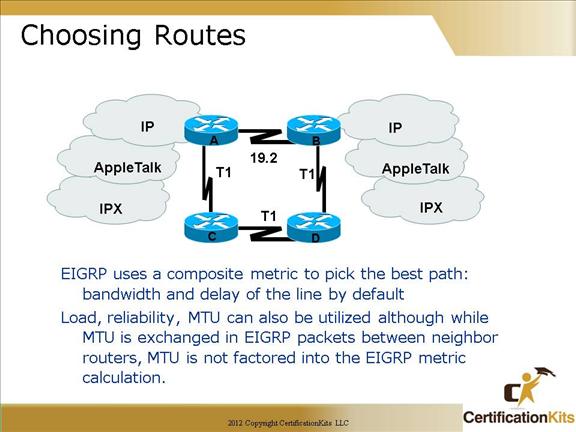 Like IGRP, EIGRP uses only bandwidth and delay of the line by default to determine the best path to a remote network. Cisco sometimes likes to call these path bandwidth value and cumulative line delay—go figure.

Values other than bandwidth and delay that can be utilized when calculating the EIGRP metric are load, reliability and MTU.

EIGRP uses the following formula to calculate the metric:

Where the default K values are as follows:

With the default values the formula can be simplified to: 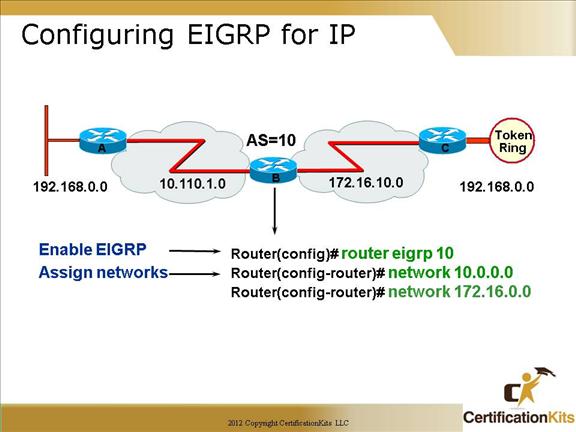 To start an EIGRP session on a router, use the “router eigrp” command followed by the autonomous system number of your network. You then enter the network numbers connected to the router using the network command followed by the network number.   Note, unlike OSPF where a process ID is specified and can be different from router to router, the autonomous system number has to be identical between routers in order for the routers to establish an EIGRP neighbor relationship and exchange routes. 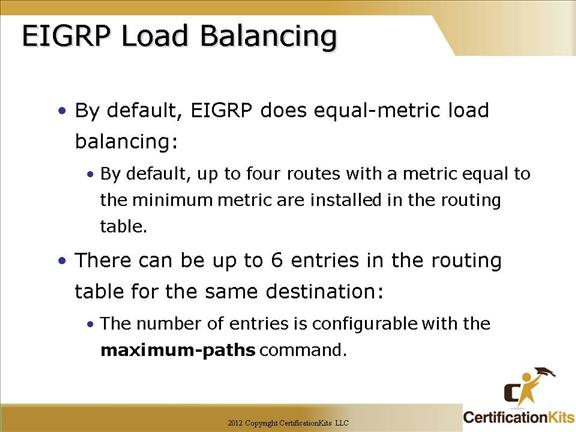 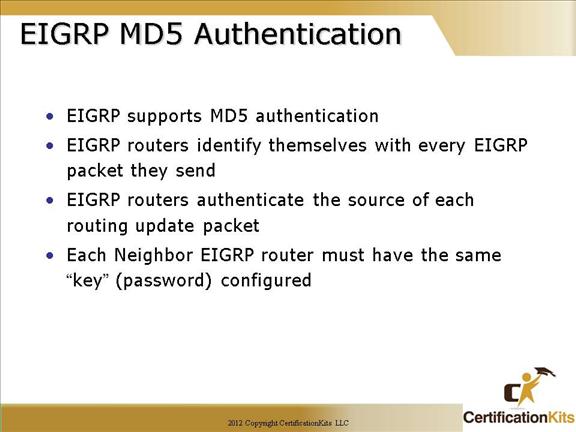