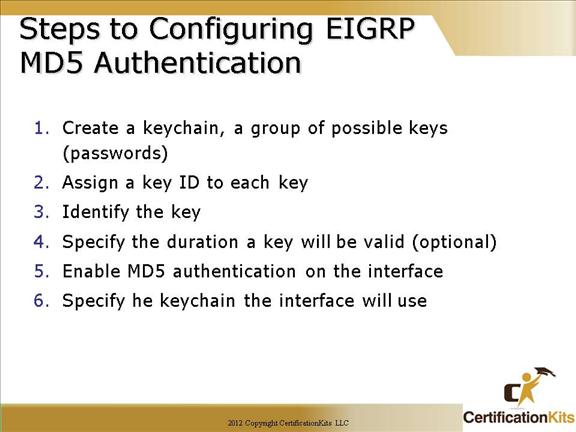 Specific commands and an example are shown on the following slide. 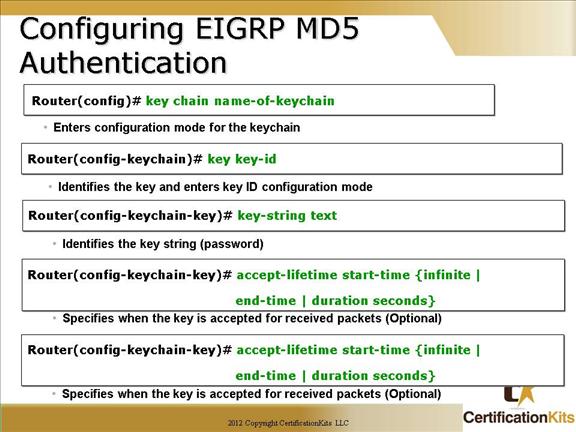 Create the key chain. MYCHAIN is used in this example.

Specify the key number. 1 is used in this example.

Note: It is recommended that the key number be the same on all routers involved in the configuration.

Specify the key-string for the key. securetraffic is used in this example.

Once you create a keychain and key, you must configure EIGRP to perform message authentication with the key. This configuration is completed on the interfaces that EIGRP is configured on. 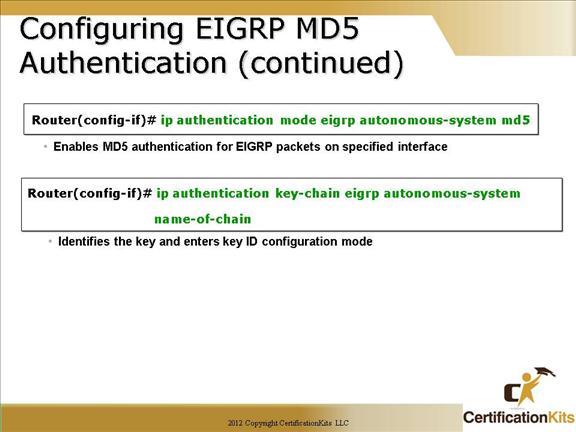 Example continued (applying to an interface):

Specify the interface that you want to configure EIGRP message authentication on. In this example the first interface is Serial 0/0.

Enable EIGRP message authentication. The 10 used here is the autonomous system number of the network. md5 indicates that the md5 hash is to be used for authentication.

NOTE: The same configuration will need to be performed on all routers running EIGRP in AS 10.

EIGRP MD5 Authentication can be verified using the following command: 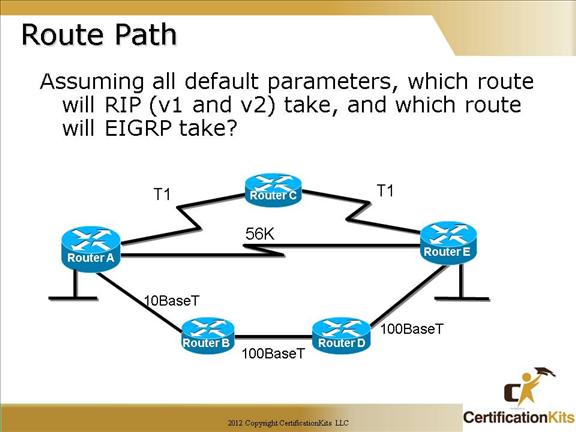 RIPv1 and RIPv2 use the same metric (hop count) and would find the 56K link the best path to the remote network.

EIGRP and IGRP each use the same metric (bandwidth and delay of the line by default) and would use the path through the LAN interfaces, not the serial T1’s or the 56K link.

As you can see while RIP takes the shortest path based on the least number of router hops, it is not always the most efficient route with regards to bandwidth and delay, in fact in this case it is by far the worst path.  Since EIGRP and IGRP factors bandwidth and delay into its routing decision it chooses the path with more hops but significantly more bandwidth and less delay which is the best of the three available paths. 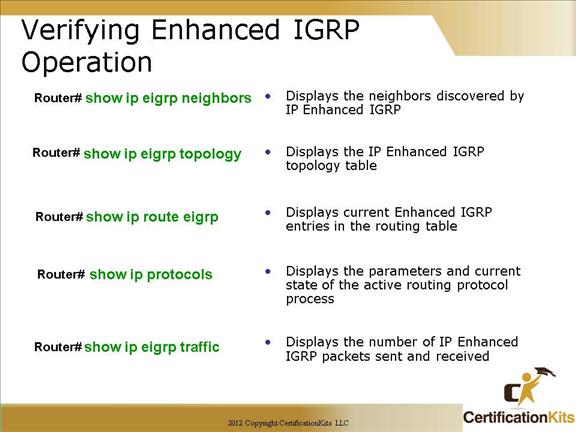 Below are several useful commands to view information about the operation of EIGRP and how it is configured. 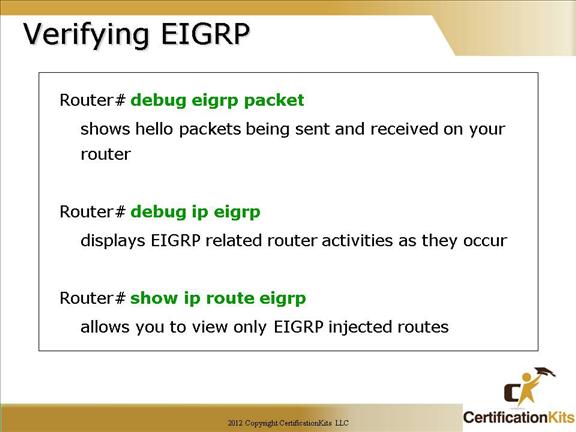 The use of debugging commands should always be used with caution in a production network as debugging is CPU intensive.  With that being said the “debug eigrp packet” command will display hello packets being sent and received by the router and the “debug ip eigrp” command displays EIGRP related activity on the router. 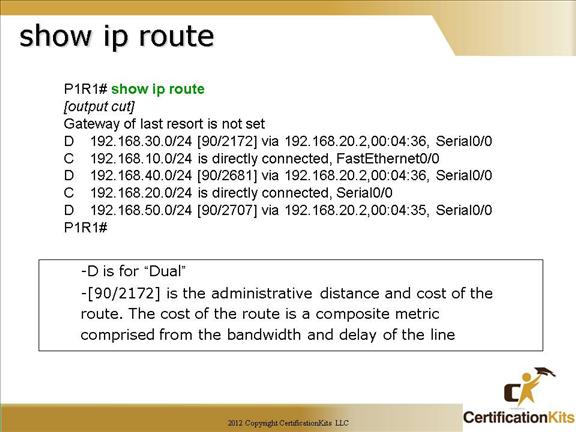 The “show ip route” command, or “show ip route eigrp” command, displays the routing table.  The use of the “eigrp” option limits the routes being display to only EIGRP routes which are denoted with the “D” in front of the route which is for “Dual”, the algoritm EIGRP uses to provide loop free routing.

[90/2172] is the Administrative Distance (90) and cost (2172) of the route. By default, the cost of the route is a composite metric comprised from the bandwidth and delay of the line. 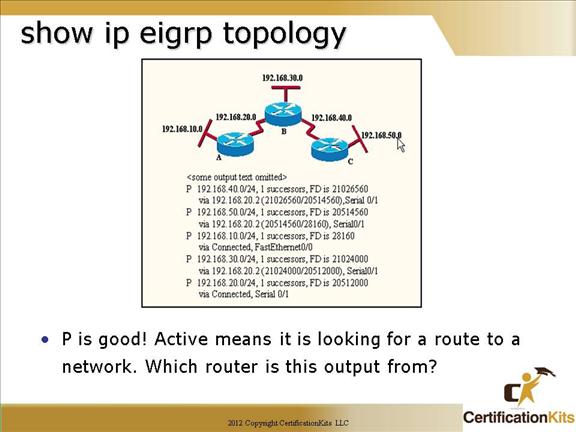 Remember this command, which shows the topology table.

ip-address – (Optional) IP address. When specified with a mask, a detailed description of the entry is provided.

all-links – (Optional) Displays all entries in the EIGRP topology table.

pending – (Optional) Displays all entries in the EIGRP topology table that are waiting for an update from a neighbor or are waiting to reply to a neighbor.

summary – (Optional) Displays a summary of the EIGRP topology table.

A maximum of 4 equal cost paths indicated by the following line in the output:

Note the “K” values where K1=1 and K3=1 and all other “K” values are 0.  This indicates that only bandwidth and delay are taken into account when calculating the cost. 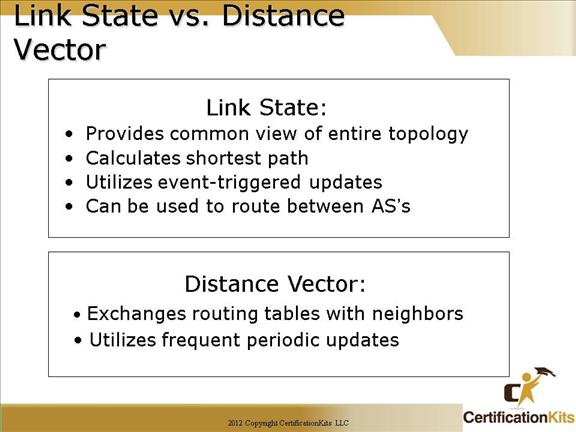