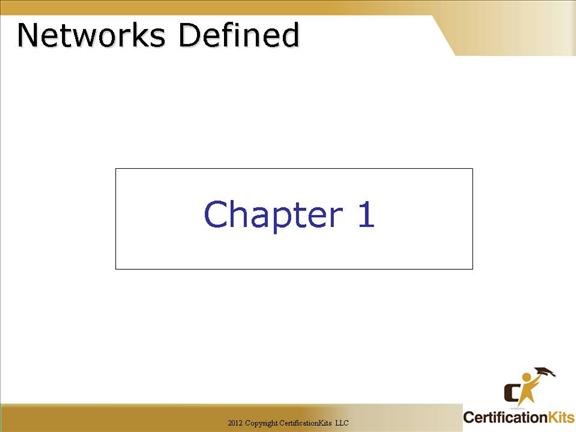 Welcome to the exciting world of internetworking.

This first chapter will help you understand the basics of internetworking by focusing on how to connect networks together using Cisco routers and switches.

To get all that down, you’ll first need to know exactly what an internetwork is, right?

You create an internetwork when you take two or more LANs or WANs and connect them via a router, and configure a logical network addressing scheme with a protocol like IP. 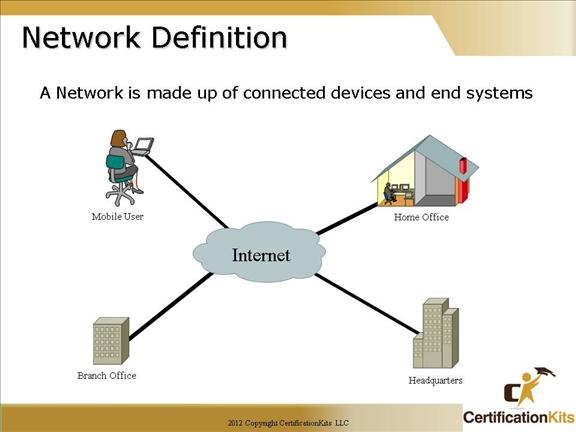 A network is a collection of network devices (i.e. switches and routers) along with end systems (i.e. PCs and servers).  Networks carry many types of data (i.e. voice, video and data) to/from many locations (i.e. Branch Office, Home Office, etc.).

Headquarters: The main site where everyone is ultimately connected.  It is where the bulk of the information is located.  Main offices typically have higher bandwidth coming into them than smaller locations.  Within the headquarters site there may be multiple Local Area Networks (LANs) attached.

Branch Office: Smaller office where a group of people work.  Typically a lot of the resources they are accessing are stored at the headquarters (main site).

Home Office: Place where an individual works from a somewhat permanent location.  Again, most of the resources they are accessing are stored at the headquarters.

Mobile User: Mobile users typically connect to the headquarters or branch office while on travel. 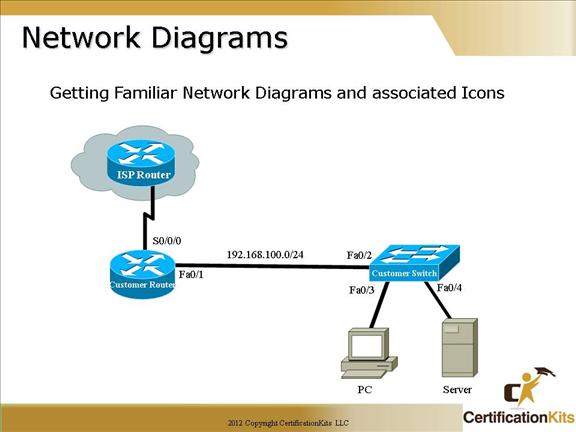 Network diagrams are vital to be able to efficiently maintain a network.   The icons represented on the slide are as follows:

The server icon represents a server.

The PC icon represents a PC.

The cloud represents a network cloud (i.e. the Internet).

Cisco CCNA Benefits of a Network 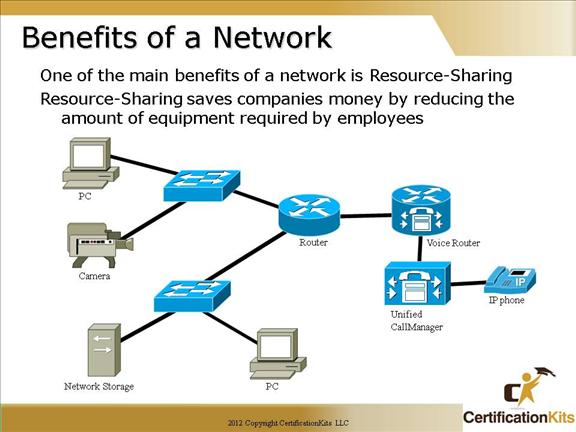 Network Storage: There are numerous types of network storage.  Some of which are direct attached storage (DAS) which connects physical storage directly to a PC or shared server, network attached storage (NAS) which makes storage available through a special network appliance and storage area networks (SANs) which provide a network of storage devices.

Data and Applications: Users can share files and software applications when connected via a network.  This makes data easily available and promotes more efficient collaboration on work projects.

Backup Devices: These devices are things such as tape drives that provide a central way of backing up (saving) files from multiple computers.  This is great for archiving and planning for disaster recovery.

Resources: Printers and cameras are just a couple of devices that can be shared on a network.

Cisco CCNA Impacts of Application on the Network 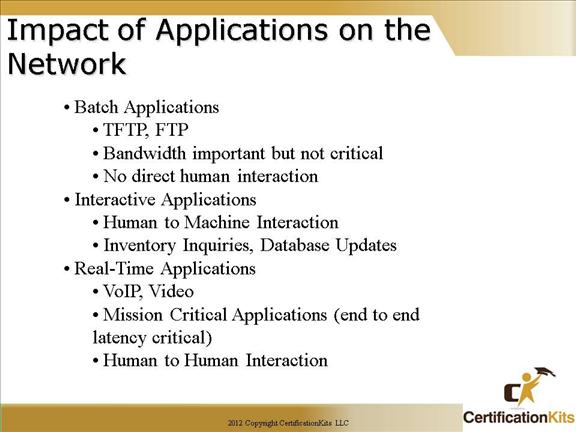 When considering the interaction between the network and applications that ran on the network, bandwidth was historically not the main concern. Batch applications such as FTP, TFTP, and inventory updates would be initiated by a user, then run to completion by the software with no further direct human interaction.  If it took a little longerfor an FTP to complete, it was not that big a deal.  Users could perform other tasks while waiting for the FTP to complete.

Cisco CCNA Characteristics of a Network 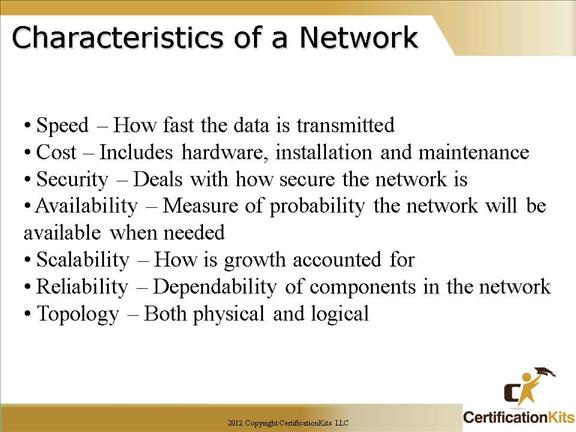 Speed: Speed is a measure of how fast data is transmitted over the network. Another term to describe speed is data rate.

Cost: Cost indicates the general cost of components, installation, and maintenance of the network.

Security: Security indicates how secure the network is, including the data that is transmitted over the network.

Availability: Availability is a measure of the probability that the network will be available for use when it is required.

Scalability: Scalability indicates how well the network can accommodate more users and data transmission requirements. If a network is designed and optimized for just the current requirements, it can be very expensive and difficult to meet new needs when the network grows.

Reliability: Reliability indicates the dependability of the components (routers, switches, PCs, and so on) that make up the network. This is often measured as a probability of failure, or mean time between failures (MTBF). 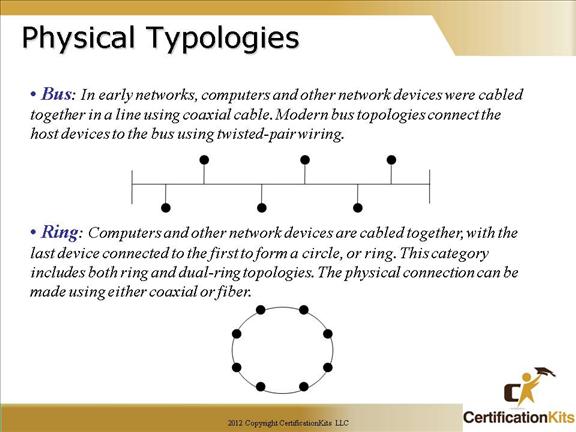 The Physical Topology refers to the cabling and layout of the physical network devices.  There are different types of cabling (i.e. twisted pair, fiber, and in the shared ethernet days coaxial – used in bus topologies).

Examples of different types of physical topologies include Bus, Ring, Star and Mesh.  Star and Mesh are covered on the following slide. 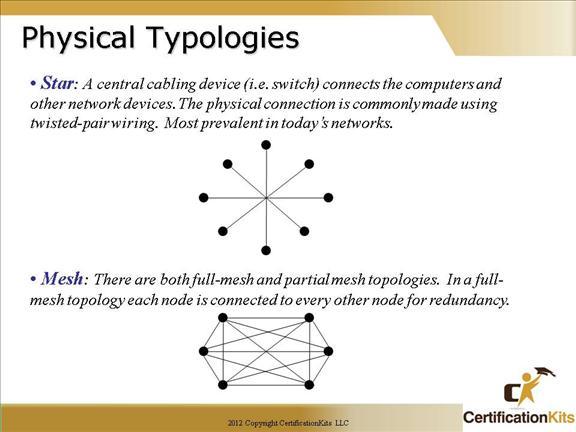 The number on connections required for a full mesh is calculated utilizing the following formula where n is the number of nodes:

For example is a 6 node network like what is in the slide, the calculation would be:

Cisco CCNA Connecting to the Internet 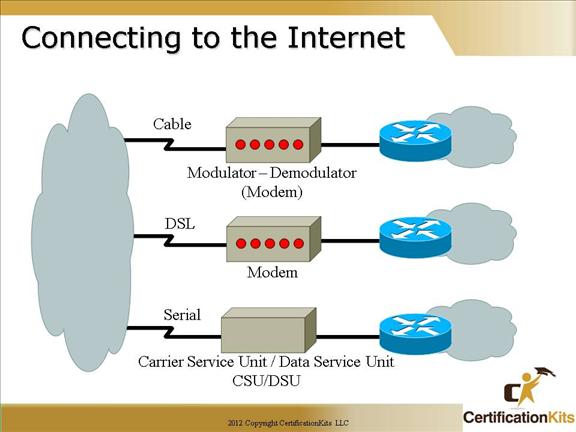 There are multiple ways of connecting to the Internet.  Some of the common ways are via Cable, DSL and Serial lines.

Cable uses the cable television (CATV) infrastructure. Serial links uses the classic digital local loops. DSL uses the existing telephone lines. In the case of DSL and cable, the incoming lines are terminated into a modem that converts the incoming digital encoding into Ethernet format. In the case of serial, this is done by CSU/DSU. In all three cases (DSL, cable, and serial) the Ethernet output is sent to a router that is part of the customer premises equipment (CPE).