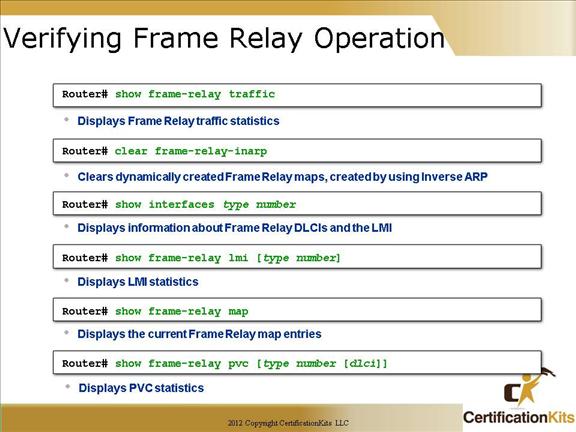 There are several commands frequently used to check the status of your interfaces and PVCs once you have Frame Relay encapsulation set up and running.  The commands shown on the slide are great for troubleshooting and verifying your Frame Relay configuration. 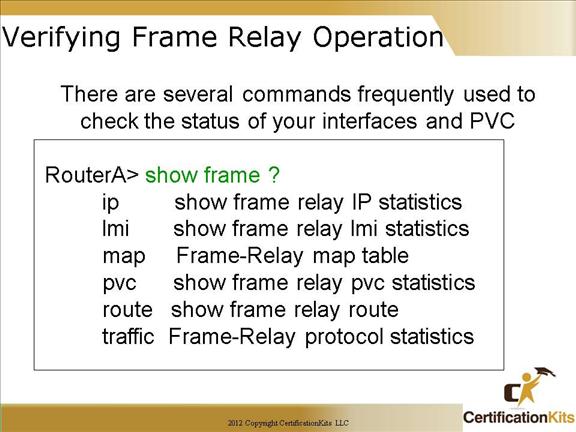 There are several commands frequently used to check the status of your interfaces and PVCs once you have Frame Relay encapsulation set up and running: 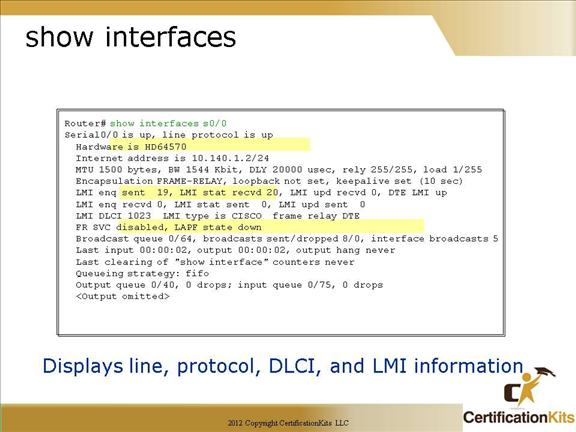 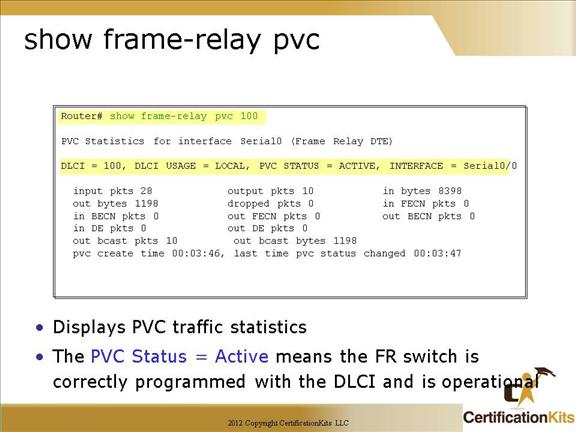 The “show frame pvc” command will list all configured PVCs and DLCI numbers. It provides the status of each PVC connection and traffic statistics. It will also give you the number of BECN and FECN packets received on the router. 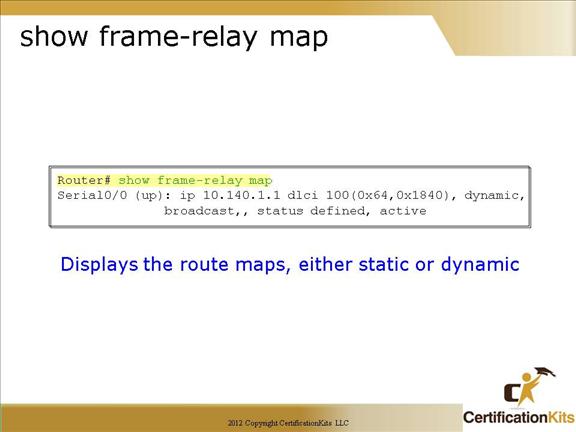 The “show frame-relay map” command will show you the Network layer–to–DLCI mappings. 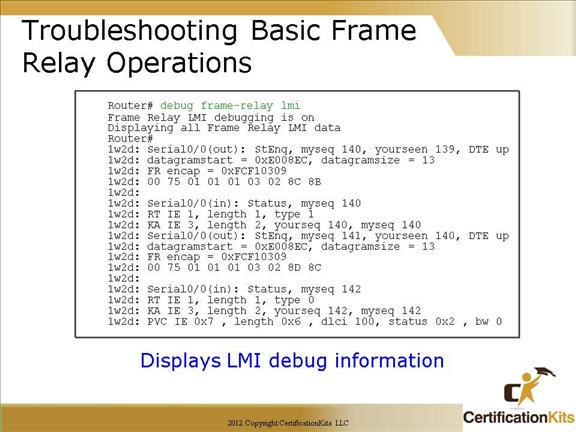 The “debug frame lmi” command will show output on the router consoles by default.

The information from this command will allow you to verify and troubleshoot the Frame Relay connection by helping you to determine whether the router and switch are exchanging the correct LMI information. 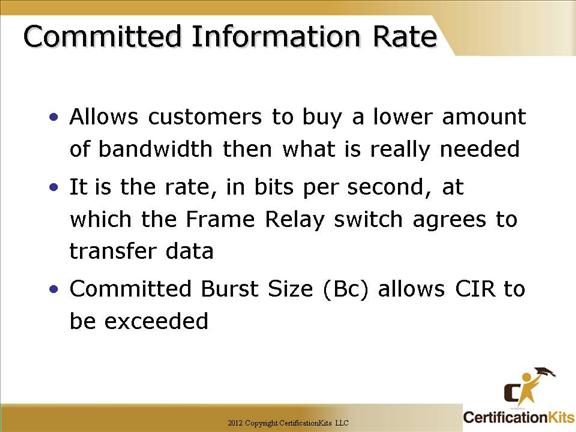 The CIR is the rate, in bits per second, at which the Frame Relay switch agrees to transfer data.

When provisioning a frame relay network, the CIR is an important configuration parameter, and if not provisioned carefully can result in discarded packets.  Although most frame relay circuits are allowed to burst up to their port speed, any packets seen that exceed the CIR threshold, are marked ‘discard eligible’ (DE).  During periods of congestion, it is possible to have packets that exceed the CIR get dropped.  Depending upon the application this may have a devastating effect.  For this reason, assure that critical applications are accounted for such that adequate bandwidth or CIR is available during peak utilization periods. 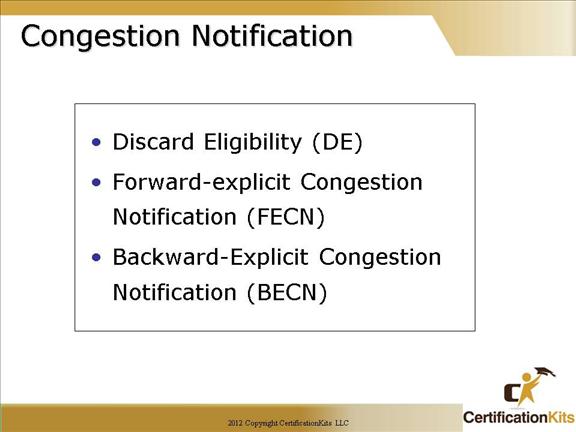 When you burst, that is, transmit packets beyond the CIR of a PVC, those packets above CIR are eligible to be discarded if congestion is encountered in the providers network.  As such, they are marked with a DE bit in the frame relay header.   If the providers network is congested, the Frame Relay switch will discard the packets with the DE bit set first. If your bandwidth is configured with a committed information rate (CIR) of zero, the DE will always be on.

When the Frame Relay network recognizes congestion in the cloud, the switch will set the Forward-Explicit Congestion Notification (FECN) bit to 1 in a Frame Relay packet header. This will indicate to the destination DCE that the path just traversed is congested.

When the switch detects congestion in the Frame Relay network, it will set the Backward-Explicit Congestion Notification (BECN) bit in a Frame Relay packet destined for the source router, letting it know that congestion is being encountered ahead.

Depending on where FECNs and BECNs are seen, this can be a sign of over-subscription, and time to upgrade the port speed or Committed Information Rate (CIR). 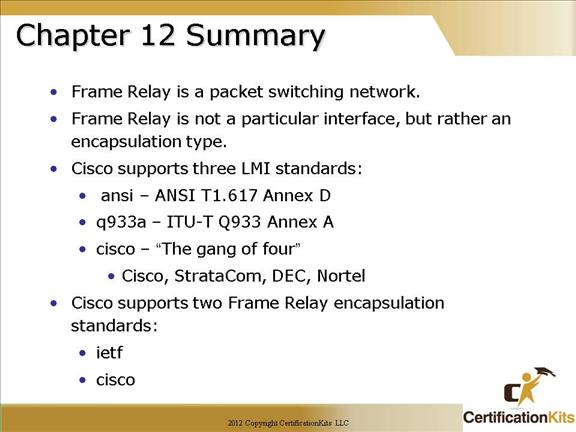 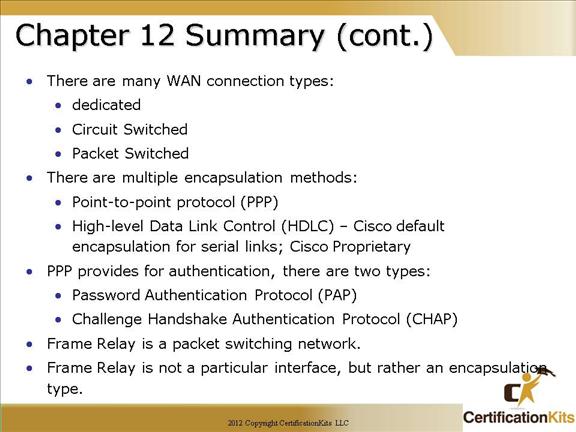