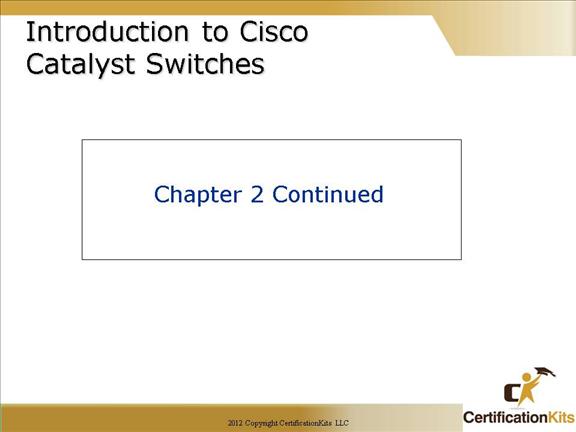 This section will introduce you to Cisco Catalyst IOS Switches and how to set an IP address on the switch so it can be managed in-band.

When Cisco’s talking about switching, they really mean layer-2 switching unless they say otherwise.  Layer-2 switching is the process of using the hardware address of devices on a LAN to segment the network.

Switching will be explained in detail in  a later chapter. 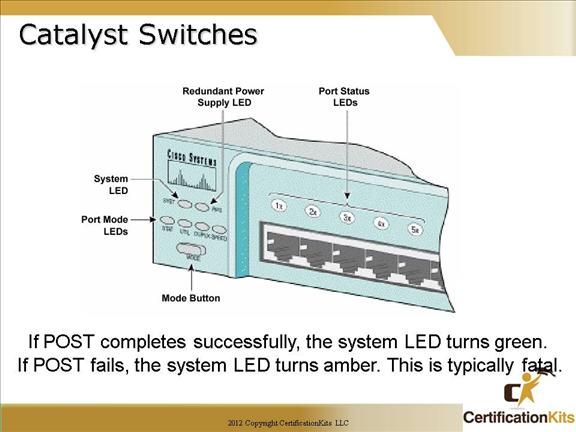 The acronym POST on the slide is Power On Self Test.

Switches come in a bunch of flavors, and runs 10Mbps all the way up to 10Gbps switched ports, with either twisted-pair or fiber.

These switches have more intelligence –they can provide basic data, video and voice services.

Some switches provide layer 3 services, while others are strictly layer 2. 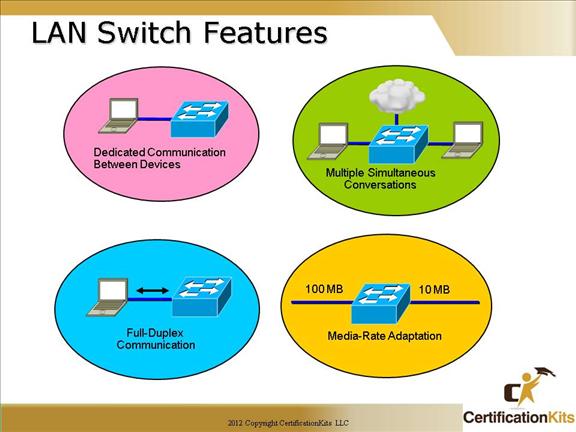 LAN Switches provide many features including dedicated connections between an end node and the switch allowing for a much smaller collision domain and the capability to run at full duplex.  They also provide buffering to account for rate adaptation (larger bandwidth source communicating with a smaller bandwidth destination).  Another important benefit of switches is the capability to support multiple conversations without degrading performance.  This is possible due to the full duplex aspect of the connections versus half duplex found in hubs. 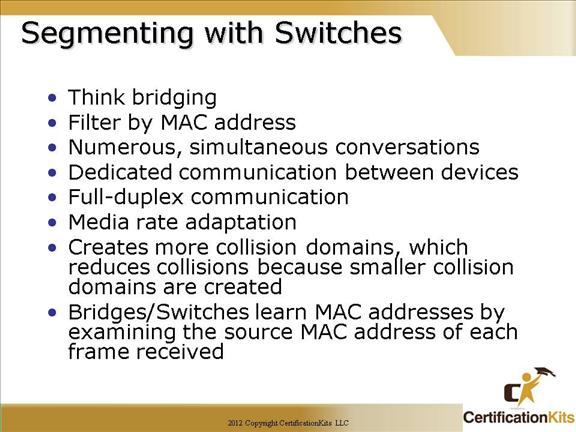 Layer-2 switching is hardware based, which means it uses the MAC address from the host’s NIC cards to filter the network.  Unlike bridges that use software to create and manage a filter table, switches use application-specific integrated circuits (ASICs) to build and maintain their filter tables.  But it’s still okay to think of a layer-2 switch as a multiport bridge because their basic reason for being is the same: to break up collision domains.

Layer-2 switches and bridges are faster than routers because they don’t take up time looking at the Network layer header information.  Instead, they look at the frame’s hardware addresses before deciding to either forward the frame or drop it. 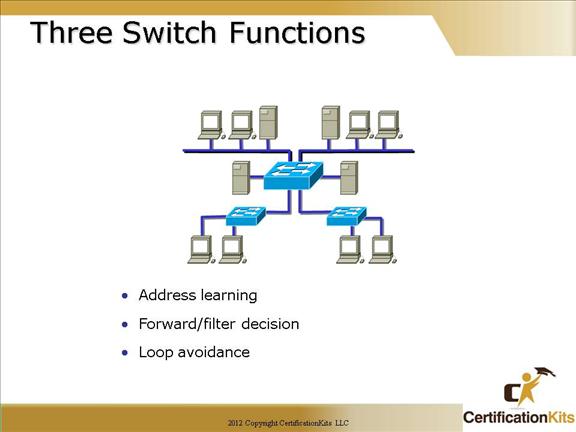 A switch accomplishes address learning by looking at the source MAC address when a packet is received.  It associates that MAC address with the interface the packet was received on, hence building a MAC address table.

Switches utilize the MAC address table they build in order to determine where to forward packets.  If the destination MAC is not in the current MAC address table, the switch will forward the packet out switch ports except the port the packet was received on. 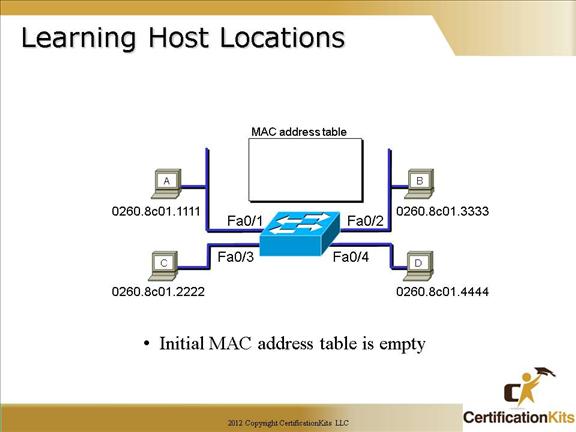 When a switch is first powered on, the MAC forward/filter table is empty.

When a device transmits and an interface receives a frame, the switch places the frame’s source address in the MAC forward/filter table, allowing it to remember which interface the sending device is located on.

The switch then has no choice but to flood the network with this frame because it has no idea where the destination device is actually located. 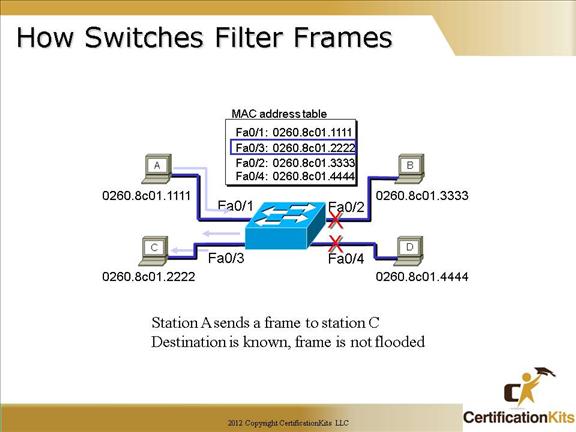 When the switch is powered on, it has nothing in its MAC address forward/filter table.

But when the hosts start communicating, the switch places the source hardware address of each frame in the table along with which port the frame’s address corresponds. 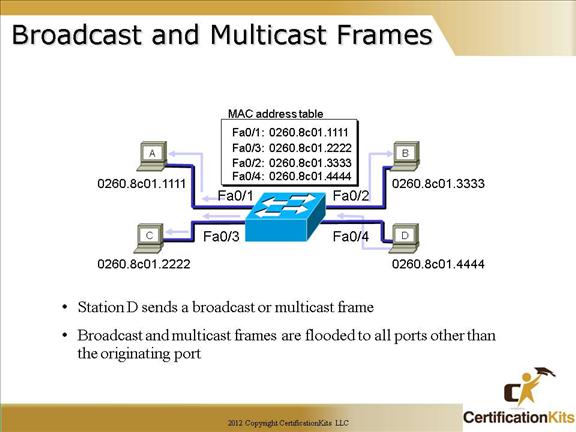 But if the destination hardware address isn’t listed in the MAC database, then the frame is broadcast out all active interfaces except the interface the frame was received on. If a device answers the broadcast, the MAC database is updated with the device’s location (interface).

If a host or server sends a broadcast on the LAN, the switch will broadcast the frame out all active ports by default. Remember, the switch only creates smaller collision domains, but it’s still one large broadcast domain by default. 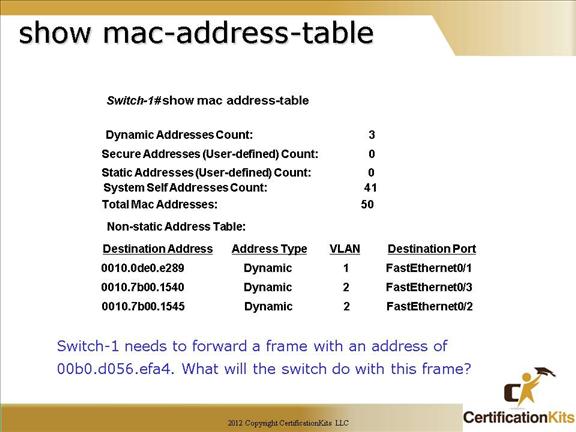 Since MAC address 00b0.d056.efa4 is not in Switch-1’s MAC address table, it would forward the frame out all ports except the port the frame was received on.

What would Switch-1 do if it received a frame with a source MAC address was 00b0.d056.efa4?