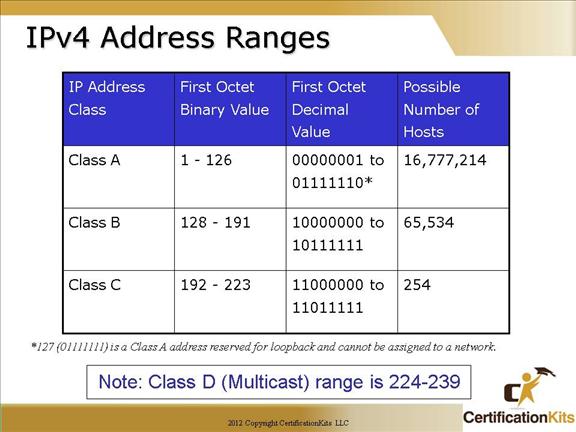 The number of possible hosts is a Class A address are much greater than the number of possible hosts in a Class C address.  Fortunately with the use of Variable Length Subnet Masks (VLSM), classfull boundaries can be removed to make better use of address space.  In order to properly route IP packets utilizing VLSM, a classless routing protocol like OSPF, EIGRP or RIP version 2 must be used.  Routing protocols such as RIP version 1 or IGRP do not recognize VLSM as they are classful routing protocols.

The designers of the IP address scheme said that the first bit of the first byte in a Class A network address must always be off, or 0. This means a Class A address must be between 0 and 126 (127 is reserved for loopback address). 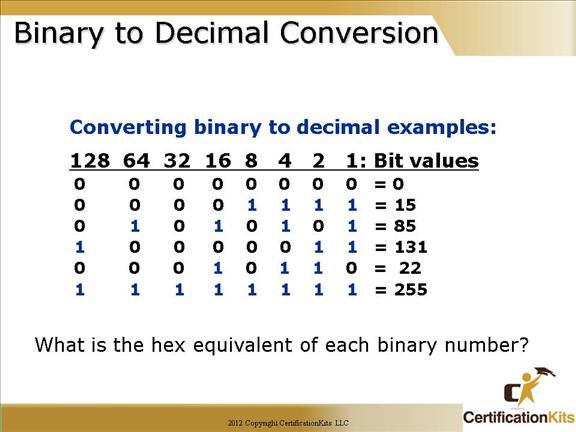 We discussed this in chapter 1, but it is important enough to review at this point:

It’s pretty simple really. The digits used are limited to either a 1(one) or a 0 (zero), with each digit being called one bit.  Typically, you count either four or eight bits together, with these being referred to as a nibble or a byte, respectively.

What interests us in binary numbering is the value represented in a decimal format—the typical decimal format being our base ten number scheme we’ve all used since kindergarten.

The binary numbers are placed in a value spot; starting at the right and moving left, with each spot having double the value of the previous spot.

So explaining a couple of examples on the slide are as follows: 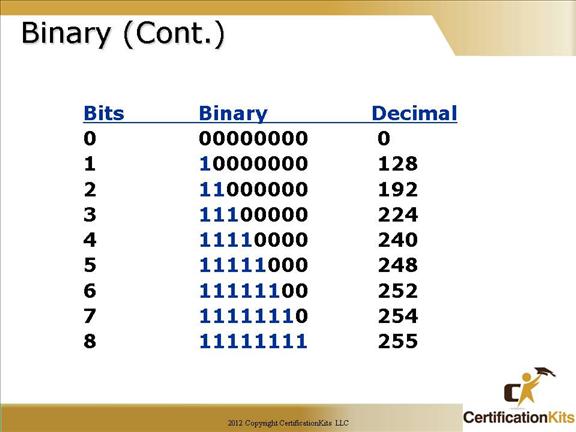 Here is a binary chart that is best just to memorize.  You will need to know this off the top of your head as we delve deeper into subnetting and when you take the CCNA test.  Notice that it is no more than taking the information just learned on the previous slide and performing a little addition.  Remember the bit values were as follows: 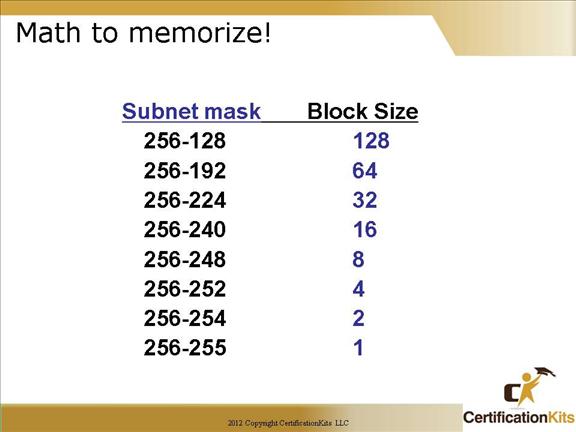 More information to memorize. Remember, an octet has 256 possible values (0 – 255).  In order to calculate the block size you need to subtract the subnet mask from 256.  For example for a 30 bit subnet which works well for addressing serial lines since only two addresses are required, the subnet of 255.255.255.252 is utilized.  If we subtract 256 – 252 we get 4 which is the block size.  The block size is the actual number of addressable hosts allowed on the subnet including the network address and broadcast address.  So in the case of a 30 bit mask there are actually only to useable addresses for hosts (4 – 2 = 2) since as stated before there are two special addresses on every network, namely the network address and broadcast address.

Block sizes will be discussed in more detail later. 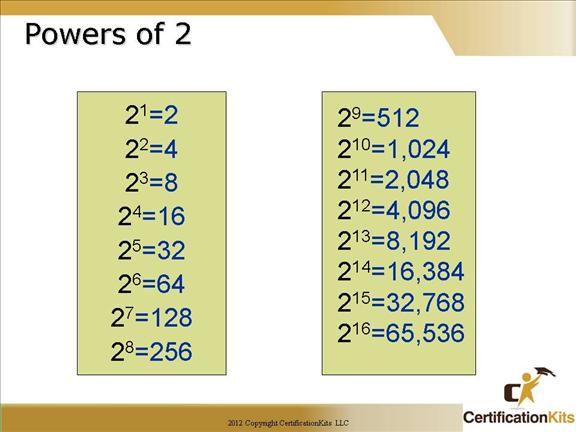 Powers of 2 are important to understand and memorize for use with IP subnetting.

To review powers of 2, remember that when you see a number with another number to its upper right (called an exponent), this means you should multiply the number by itself as many times as the upper number specifies. 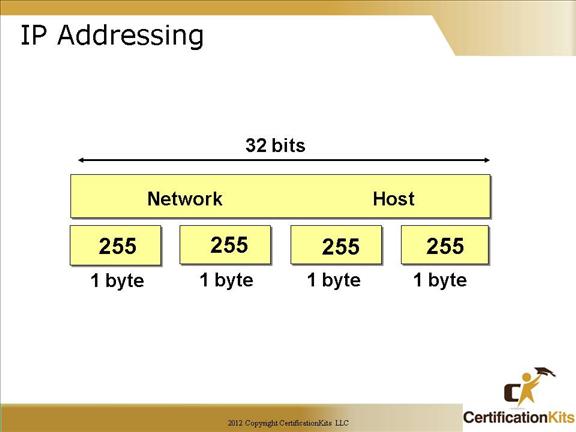 An IP address consists of 32 bits of information.  These bits are divided into four sections, referred to as octets or bytes, each containing 1 byte (8 bits).   The address is logically separated into a network portion and a host portion.  The subnet mask defines where the network portion ends and the host portion begins. 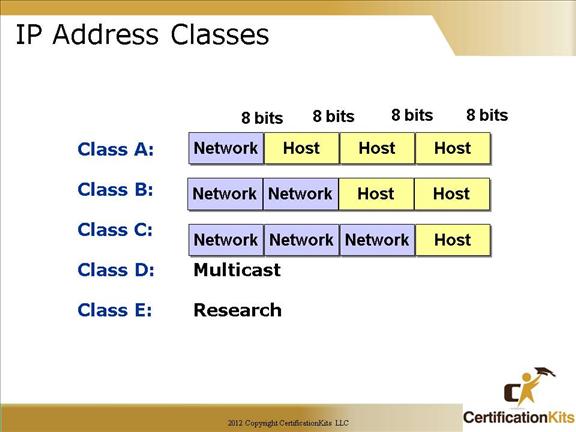 The designers of the Internet decided to create classes of networks based on network size. For the small number of networks possessing a very large number of nodes, they created the rank Class A network.

At the other extreme is the Class C network, which is reserved for the numerous networks with a small number of nodes.

The class distinction for networks between very large and very small is predictably called the Class B network.

Subdividing an IP address into a network and node address is determined by the class designation of one’s network.

With the advent of Variable Length Subnet Masks (VLSM), the distinction between the different classes of IP addresses are not as important as they used to be. 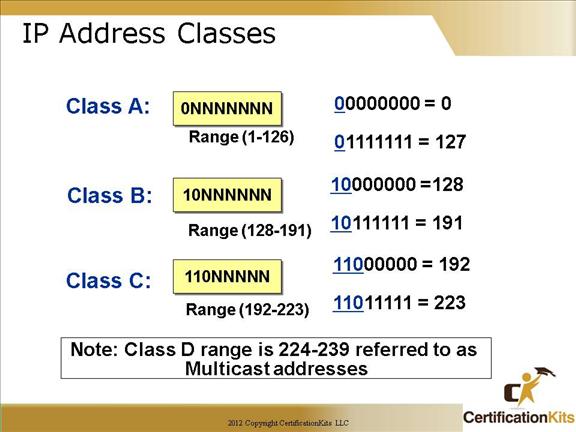 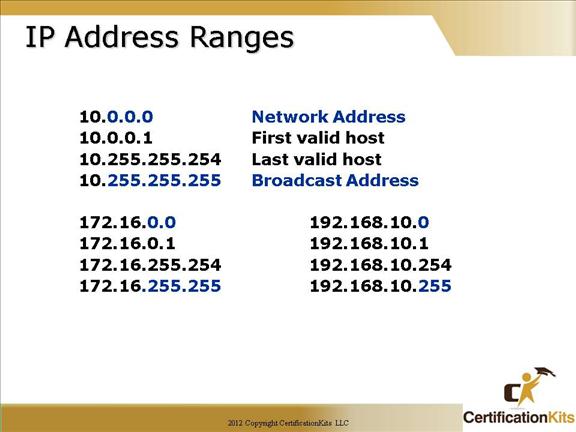 Here’s an example of how to figure out the valid host IDs in a Class A network address:

Notice that 0s and 255s can be valid host IDs. All you need to remember when trying to find valid host addresses is that the host bits can’t all be turned off (defines network address) or all be on (defines broadcast address) at the same time. 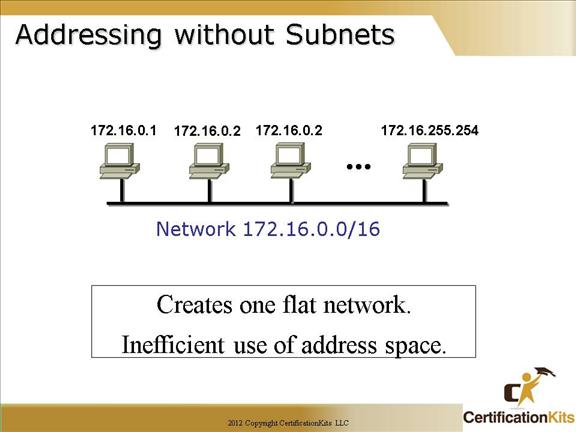 Without creating subnetworks, all hosts would be on one large network. Not good…really not good.  This type of network creates one large broadcast domain.  It is not scalable.  Routers are used to break up broadcast domains and allow for communication between different ip subnets. 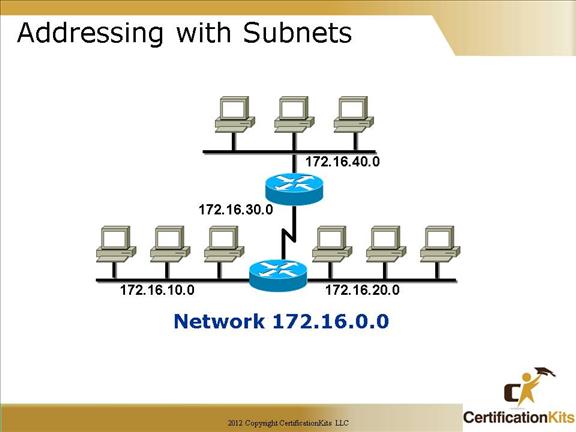 There are lots of reasons to utilize ip subnetting. Some of the benefits include: 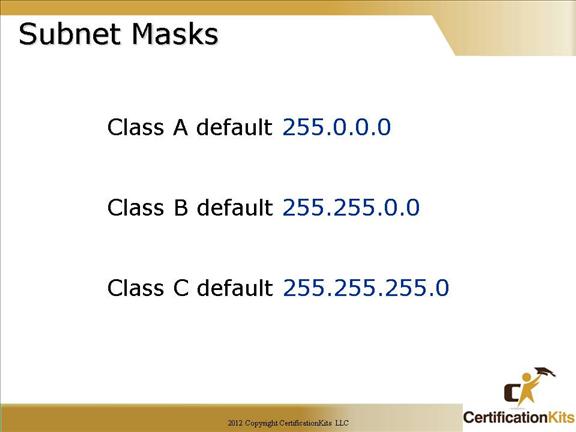 The network administrator creates a 32-bit subnet mask composed of 1s and 0s. The 1s in the subnet mask represent the positions that refer to the network or subnet addresses.  Not all networks need subnets, meaning they use the default subnet mask. This is basically the same as saying that a network doesn’t have a subnet address.  0s in the mask indicate that bit position corresponds to the host portion of the ip address.