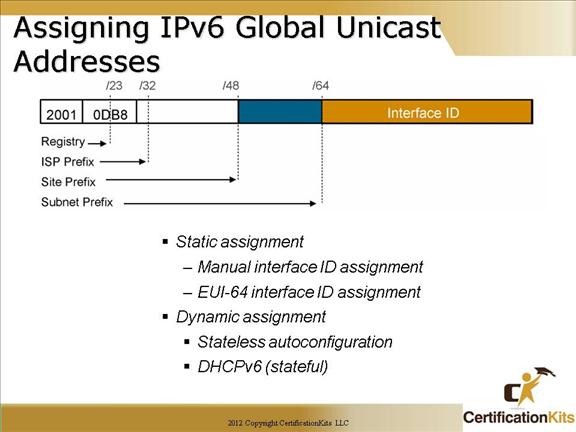 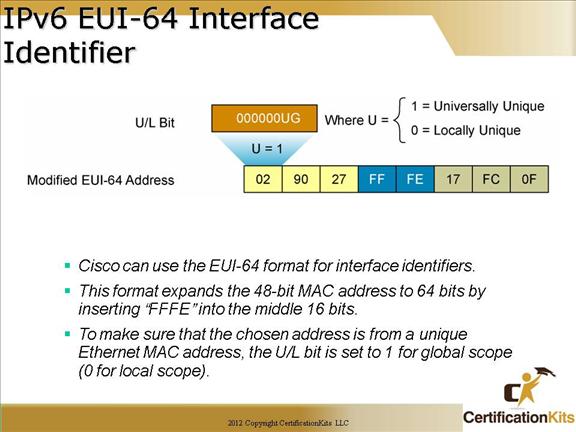 The interface identifier for stateless auto-configuration in an Ethernet environment uses the modified EUI-64 format. This format expands the 48-bit Ethernet MAC address format to a 64-bit version by inserting “FFFE” in the middle of the 48 bits. This creates a 64-bit version.

The rationale of the U/L bit is for future use of the upper-layer protocols to uniquely identify a connection, even in the context of a change in the leftmost part of the address. However, this is not yet used.

The 8th bit (starting with leftmost bit as “1”), also known as the “G” bit, is a group/individual bit for managing groups. 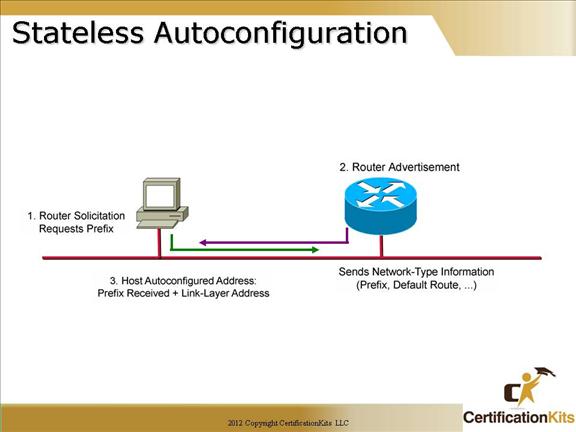 Stateless Auto Configuration is an important feature offered by the IPv6 protocol. It allows the various devices attached to an IPv6 network to connect to the Internet using the Stateless Auto Configuration without requiring any intermediate IP support in the form of a Dynamic Host Configuration Protocol (DHCP) server. A DHCP server holds a pool of IP addresses that are dynamically assigned for a specified amount of time to the requesting node in a Local Area Network (LAN). 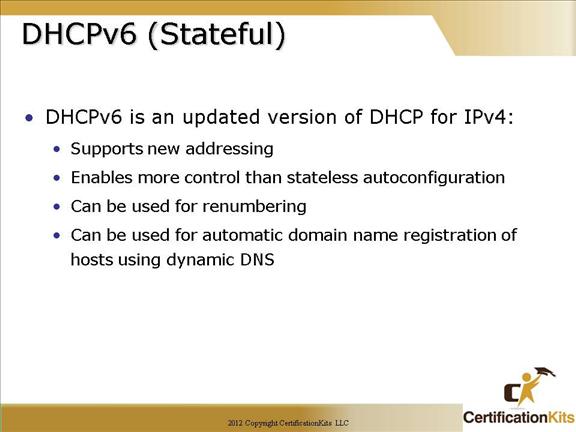 DHCPv6 (Dynamic Host Configuration Protocol) is an updated version of DHCP for IPv4.  It supports the addressing model of IPv6 and benefits from new IPv6 features.  DHCPv6:

Can be used in a routerless environment using only servers.

Can also be used concurrently with stateless auto-configuration.

Can be used for renumbering.

Can be used for automatic domain name registration of hosts using dynamic DNS. 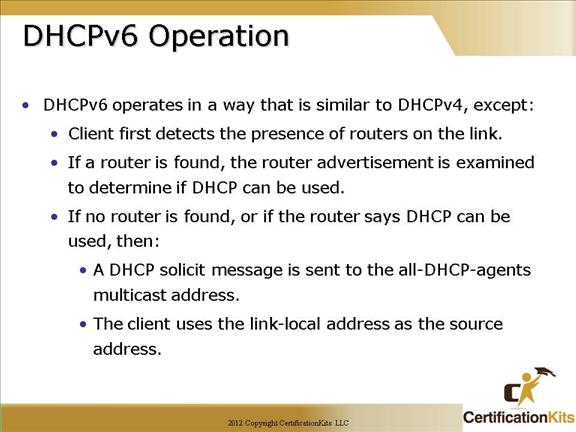 The process for acquiring configuration data for a client is similar to that in IPv4, but with a few exceptions.  Initially, the client must first detect the presence of routers on the link using Neighbor Discovery messages.  If at least one router is found, then the client examines the router advertisements to determine if DHCP should be used.  If the router advertisements enable use of DHCP on that link or if no router is found, then the client starts a DHCP Solicit phase to find a DHCP server.

DHCPv6 uses multicast for many messages. When the client sends a Solicit message, it sends the message to the ALL-DHCP-Agents multicast address with link-local scope. Agents include both servers and relays.

When a DHCP relay forwards a message, it can forward it to the All-DHCP-Servers multicast address with site-local scope. This means that a relay does not need to be configured with all the static addresses of the DHCP servers, as in IPv4.  If needed by policy, a relay can contain a static list of DHCP servers. 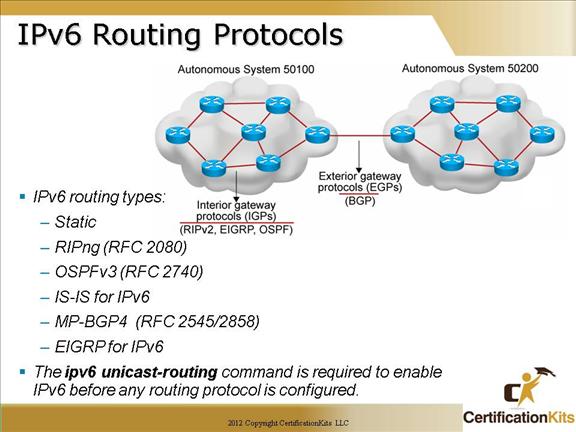 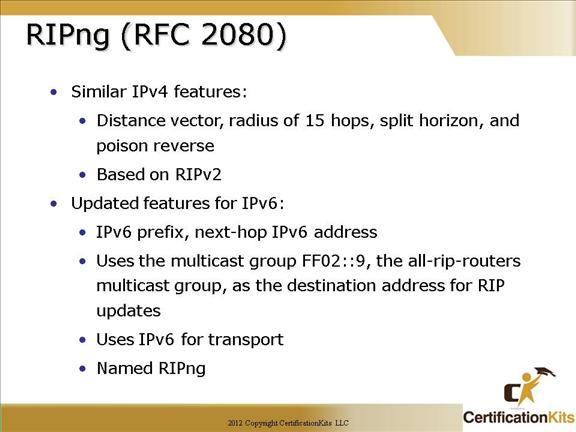 RIPng (RIP next generation) is an information routing protocol for the IPv6. RIPng for IPv6 is based on protocols and algorithms used extensively in the IPv4 Internet such as RIP and RIP2. In a very large network, such as the Internet, there are many routing protocols used for the entire network. The network will be organized as a collection of Autonomous Systems (AS). Each AS will have its own routing technology, which may differ among AS’s. The routing protocol used within an AS is referred to as an Interior Gateway Protocol (IGP). 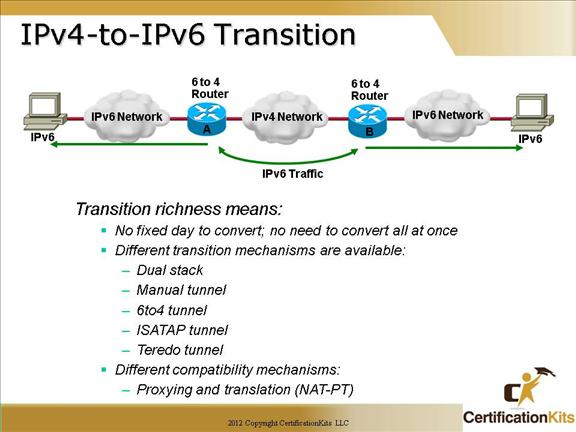 Dual stack – Using dual-stack backbones is a basic strategy for routing both IPv4 and IPv6. All routers in the network need to be upgraded to be dual-stack. IPv4 communication uses the IPv4 protocol stack (with forwarding of IPv4 packets based on routes learned through running IPv4-specific routing protocols), and IPv6 communication uses the IPv6 stack with routes learned through the IPv6-specific routing protocols.

Manual tunnel – A manually configured tunnel is equivalent to a permanent link between two IPv6 domains over an IPv4 backbone. The primary use is for stable connections that require regular secure communication between two edge routers or between an end system and an edge router, or for connection to remote IPv6 networks such as the 6bone. The edge routers and end systems, if they are at the end of the tunnel, must be dual-stack implementations.

6to4 tunnel – An automatic 6to4 tunnel allows isolated IPv6 domains to be connected over an IPv4 network and allows connections to remote IPv6 networks such as the 6bone. The key difference between this and manually configured tunnels is that the routers are not configured in pairs (and thus do not require manual configuration) because they treat the IPv4 infrastructure as a virtual nonbroadcast link, using an IPv4 address embedded in the IPv6 address to find the other end of the tunnel.