!— The Key value is set as “kal”.  It is the password that is sent across the network.

!— Plain text authentication is enabled for all interfaces in Area 0.

Configuring MD5 authentication is similar.  Under the interface configuration the following command would be utilized:

Under the router ospf 10 the following would be utilized: As you can see from the output on the slide, fields that are displayed are as follows: 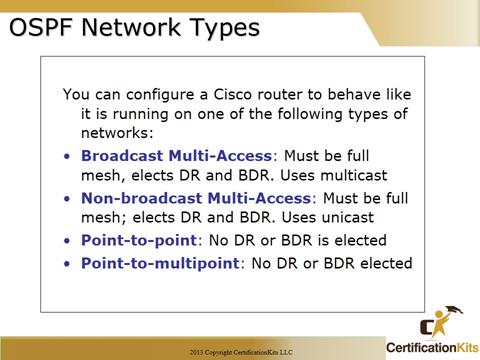 Broadcast (multi-access) networks such as Ethernet allow multiple devices to connect to (or access) the same network, as well as provide abroadcast ability in which a single packet is delivered to all nodes on the network. In OSPF, a DR and BDR must be elected for each broadcast multi-access network.

Point-to-point refers to a type of network topology consisting of a direct connection between two routers that provides a single communication path. The point-to-point connection can be physical, as in a serial cable directly connecting two routers, or it can be logical, as in two routers that are thousands of miles apart, yet connected by a circuit in a Frame Relay network. In either case, this type of configuration eliminates the need for DRs or BDRs.

Point -to-multipoint refers to a type of network topology consisting of a series of connections between a single interface on one router and multiple destination routers. All of the interfaces on all of the routers sharing the point-to-multipoint connection belong to the same network. As with point-to-point, no DRs or BDRs  are needed. 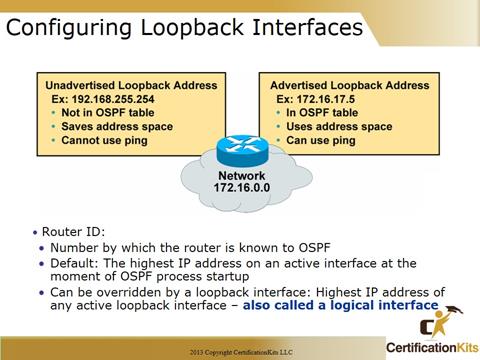 There are several ways to verify proper OSPF configuration and operation, and this slides shows some basic verification commands.

Highest IP address on a router is the RouterID

Recommended to use Loopback interface Sometimes it is desirable for a router to be configured so that it is not eligible to become the DR or BDR. 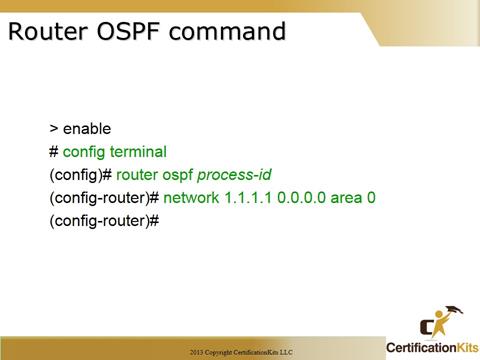 -Enables the OSPF routing process on an interface

-Every network must be associated with an area that can be specified in decimal or dotted-decimal notation. For stability, no one router should belong to more than 3 areas. Let’s move on and evaluate the output of each of these commands.

The show ip protocols command also gives you many of the OSPF parameters such as filters, default metric, maximum paths, and the number of areas configured on a router. There are several commands that a network administrator can use to verify OSPF.  The show ip ospf interface command is used to identify which interfaces are currently participating in OSPF. 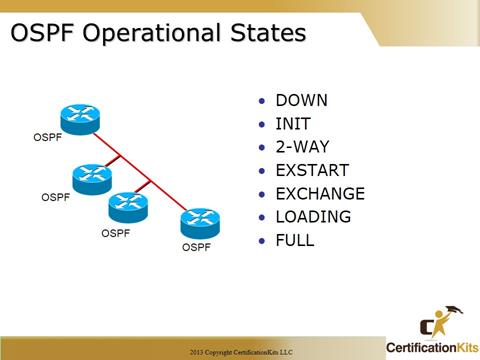 DOWN – no recent information received

INIT – a hello packet has been seen

2-WAY – neighborship has been established

— election for DR/BDR may now occur — 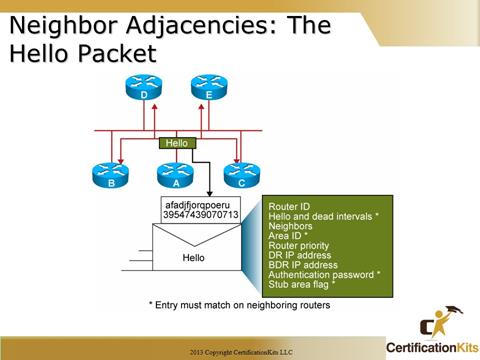 Hello packets are utilized by OSPF routers to recognize each other in order to share information.  Each interface participating in OSPF sends hello packets multicast periodically to 224.0.0.5.  The entries in the figure with an “*” much match between adjacent routers or a neighbor relationship will NOT be established.  These include Hello and dead intervals, Area ID, Authentication password (if used) and Stub area flag.

Each hello packet sent from an OSPF router will contain:

Timer Value (Hello)  ****This number must match for all neighbors, if not OSPF will not form a relationship with that peer!****

This is the information your OSPF router will use during the OSPF elections.

The frequency of the hello packets can be modified, however if one router modifies the timer interval, all OSPF routers in that network must modify their timers to match. Type E2 entries do not add internal OSPF costs – default behavior. Assumption is that routing between AS represents the major cost and that the path cost inside a single AS is trivial in comparison 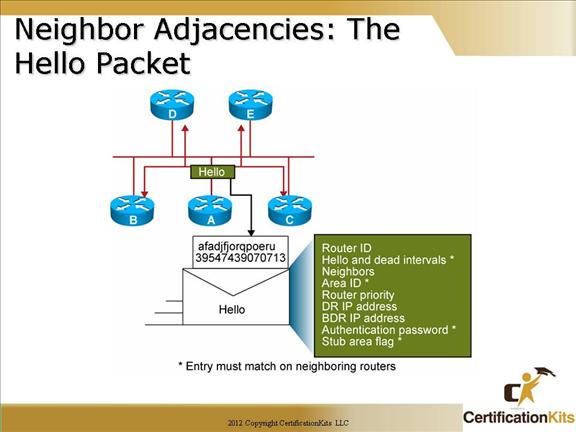 Hello packets are utilized by OSPF routers to recognize each other in order to share information.  Each interface participating in OSPF sends hello packets multicast periodically to 224.0.0.5.  The entries in the figure with an “*” much match between adjacent routers or a neighbor relationship will NOT be established.  These include Hello and dead intervals, Area ID, Authentication password (if used) and Stub area flag. 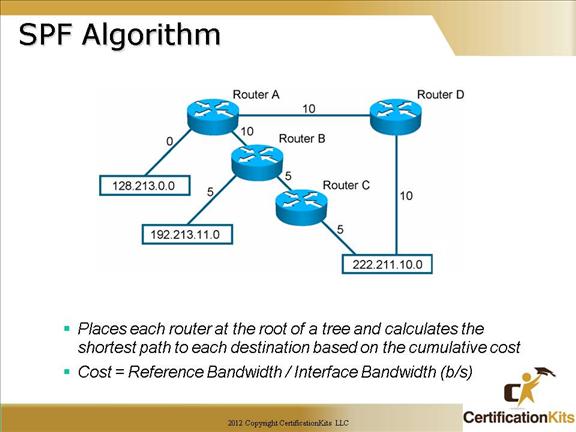 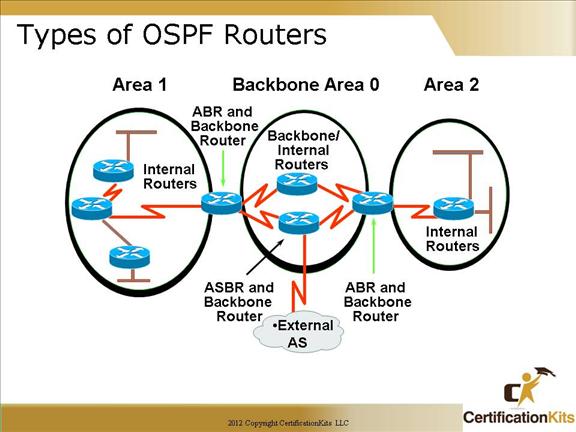 OSPF must have an area 0, and all non-zero areas must connect to this area (an exception is when using a virtual link which is not covered in this course).  Non-zero areas are connected to the backbone area (area 0) through Area Boundary Routers (ABRs). Still, at least one interface of a router must be in area 0.

You must have an area 0 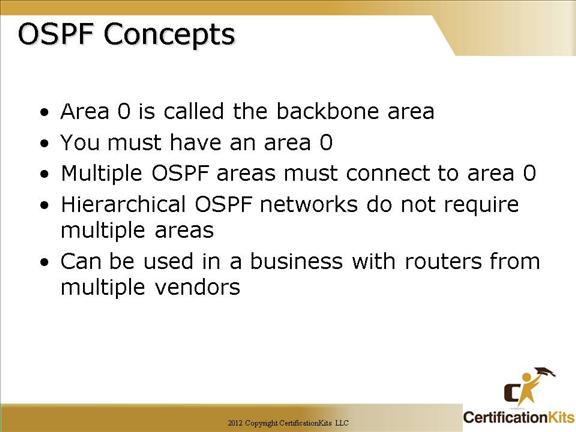 You must have an area 0

Area’s can be any number up to 2.4 billion and can even be displayed as an IP address if you wish. 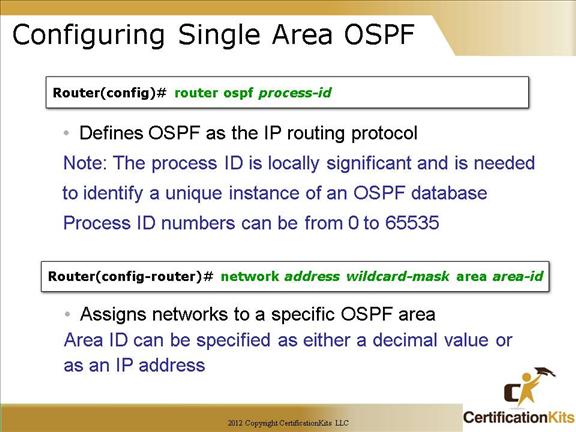 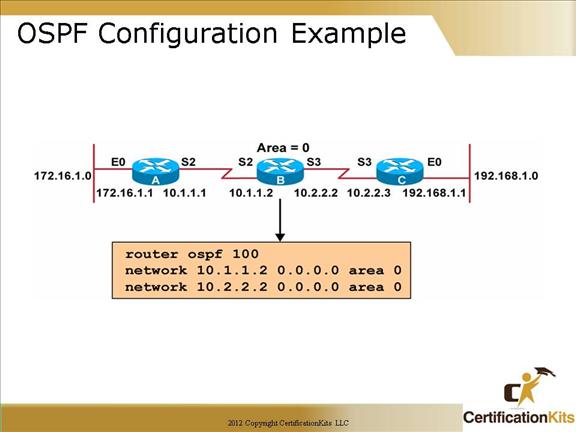 After identifying the OSPF process, you need to identify the interfaces that you want to activate OSPF communications on, as well as the area in which each resides. 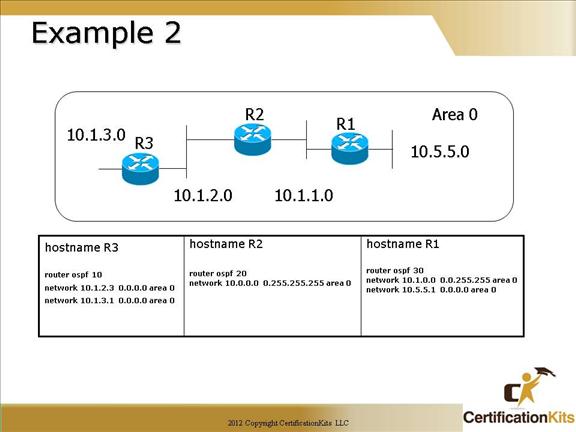 There are various ways to configure OSPF.

The configuration of R3 shows how the 0.0.0.0 wildcard is used to place each interface individually into area 0

R2 show how two interface can be configured into area 0 with one wildcard network statement of 0.255.255.255

It doesn’t matter how you configure the network statements, the results are the same. 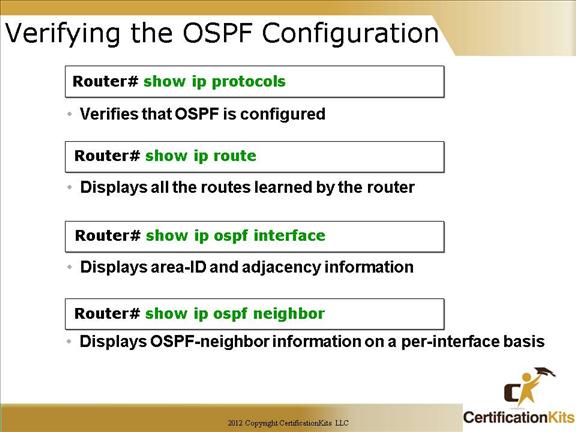