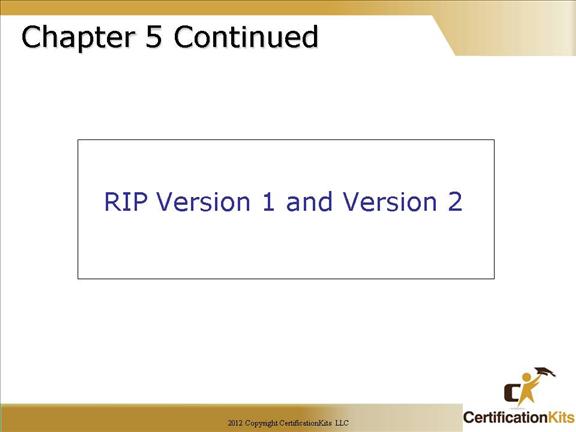 This section will describe the Routing Information Protocol (RIP). 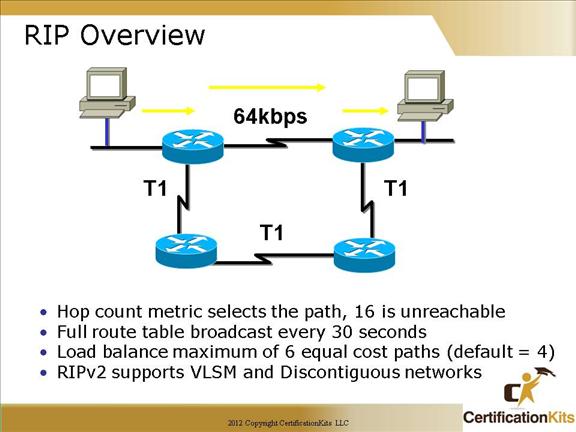 Routing Information Protocol (RIP) is a true distance-vector routing protocol. It sends the complete routing table out to all active interfaces every 30 seconds.

RIP only uses hop count to determine the best way to a remote network, but it has a maximum allowable hop count of 15 by default, meaning that 16 is deemed unreachable.

RIP works well in small networks, but it’s inefficient on large networks with slow WAN links or on networks with a large number of routers installed.

RIP version 1 uses only classful routing, which means that all devices in the network must use the same subnet mask.

RIP version 1 is somewhat bandwidth intensive as it sends it’s entire routing protocol to it’s neighbors every 30 seconds.  While bandwidth intensive is mentioned it is all relative as networks these days in a switched LAN environment are typically between 10Mbs and 10Gbs. 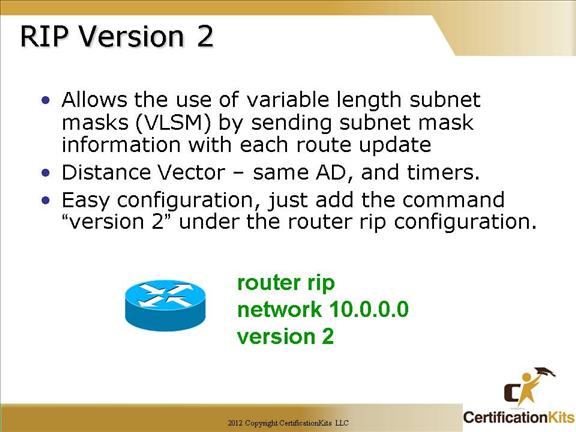 To configure RIP routing, just turn on the protocol with the “router rip” command and tell the RIP routing protocol which networks to advertise.

Note:  RIPv2 sends updates via IP multicast while RIPv1 uses broadcasts.  The other main difference is when you specify “version 2” it causes the subnet mask to be advertised in the routing updates which means RIP version 2 is a classless routing protocol.

RIPv2 is the preferred choice over RIPv1 because it supports VLSM and discontiguous networks. 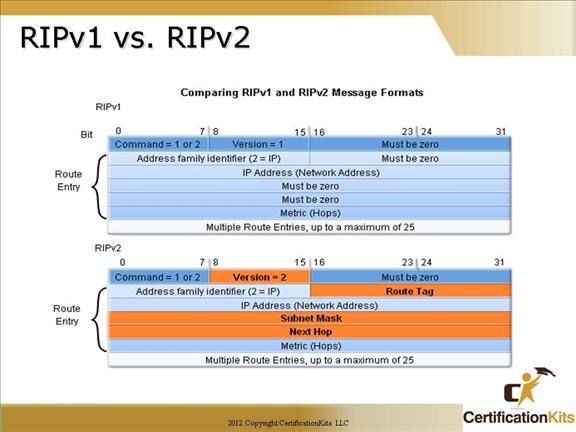 Notice that both RIP version 1 and 2 support a maximum of 25 route entries per update.  So if your router has 110 routes, 5 RIP packets will be sent to all neighbors every 30 seconds.  Four of the RIP packets would contain 25 routes while the 5th packet would contain 10 routes. 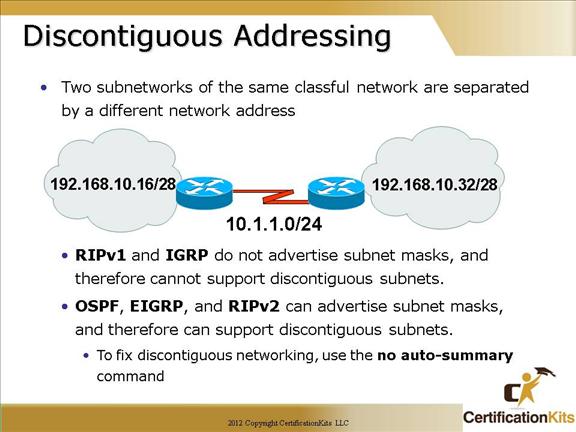 If you create VLSM networks, sometimes you may find that the backbone connecting buildings together is a different class of network. This is called discontiguous addressing. 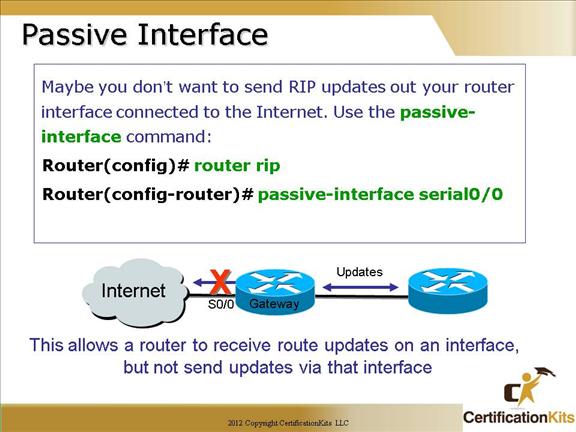 No worries—there are a few different ways to stop unwanted RIP updates from propagating across your LANs and WANs. The easiest one  is through the passive-interface command. 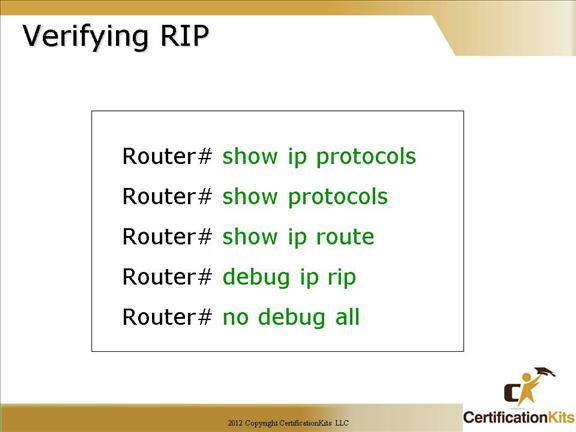 Description of the commands listed on the slide:

debug ip rip: Displays rip updates being sent and received on your router

no debug all: turns off all debugging (can also use the command “undebug all”) 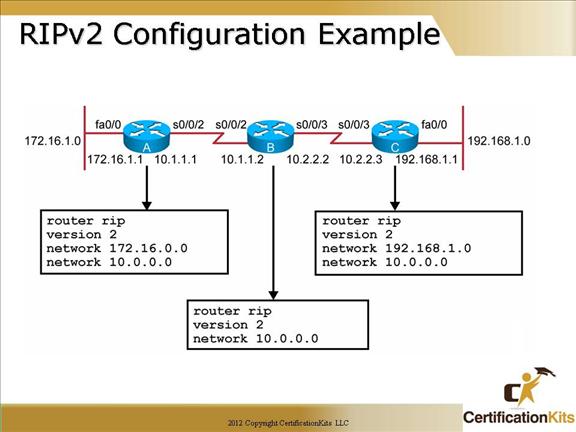 The figure shows how the RIP commands operate on the example network. An administrator only specifies directly connected networks that should be published to other routers. 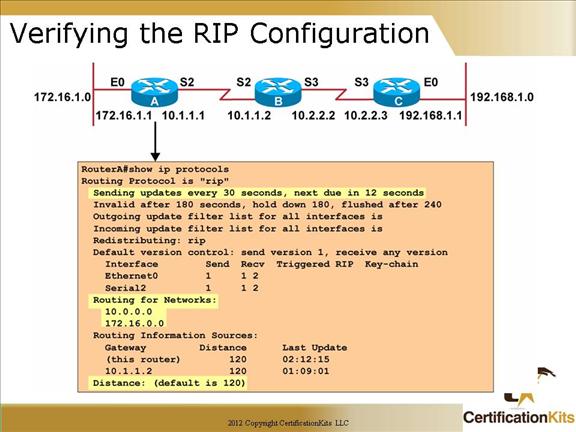 This figure shows how the “show ip protocol” command is used to monitor RIP operation.

The command displays the routing protocols that are active on the router for IP. It also gives network and timer information.

Notice the list of networks for which the router is injecting routes and lastly, notice the Administrative Distance.

This is a useful command to see what routing protocols (RIP and others) that are configured on the router. 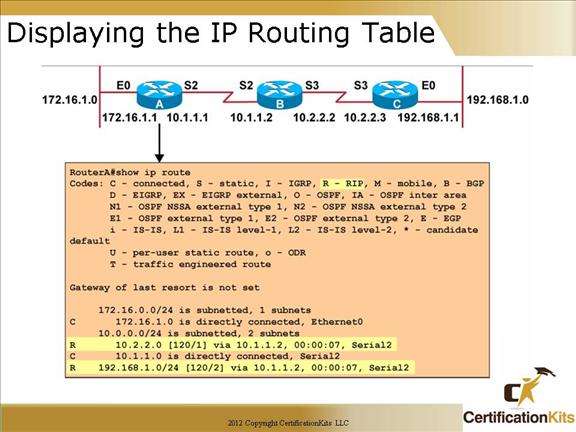 This figure displays the output of a “show ip route” command, which displays the contents of the router’s  IP routing table.

Notice the locations of the hop count (metric) and the Administrative Distance (120).

R—Refers to routes learned from RIP.

via—Refers to the router that informed us about this route (in other words next-hop).

The interfaces used for the best path. 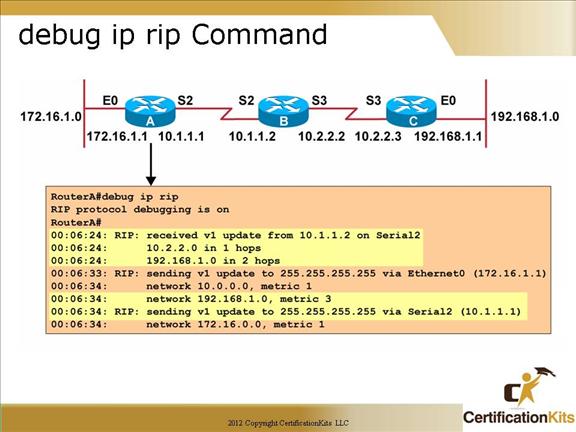 This figure shows output from the “debug ip rip” command.

The first highlighted line lists the source of the updates. The router returned information about two destinations.

The last highlighted line shows the broadcast address to which the router sent updates.  In RIP version 1 router updates are always went to 255.255.255.255.