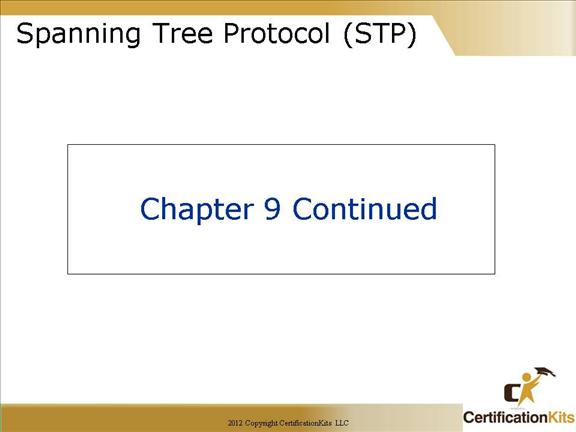 Spanning Tree Protocols (STP’s) main task is to stop network loops from occurring on your layer-2 network (bridges or switches).

It vigilantly monitors the network to find all links, making sure that no loops occur by blocking any redundant ones.

STP uses the spanning-tree algorithm (STA) to first create a topology database, then search out and destroy redundant links.

With STP running, frames will only be forwarded on the premium, STP-picked links.  All other links will be blocked. 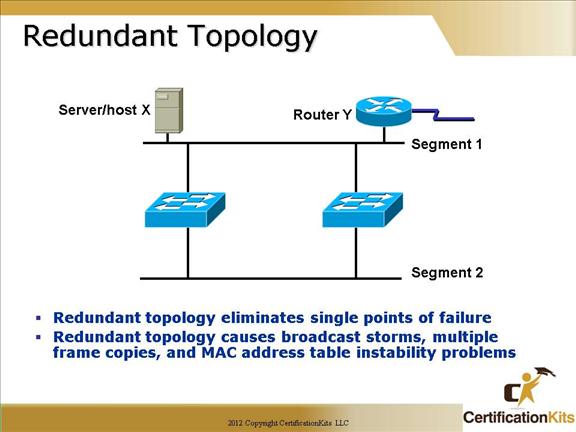 Some of the problems that can occur with redundant links in a switched / bridge network are as follows:

Multiple frame transmissions: Multiple copies of unicast frames may be delivered to a destination host.  This can cause problems if the higher layer protocol is expecting only one copy and cannot handle multiple copies. 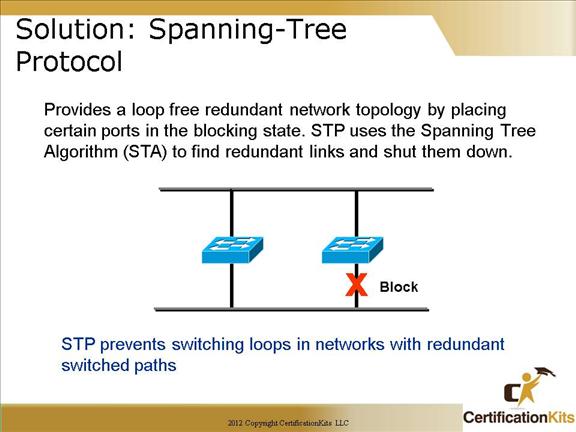 STP’s main task is to stop network loops from occurring on your layer-2 network (bridges or switches). It vigilantly monitors the network to find all links, making sure that no loops occur by shutting down any redundant links.

With STP, the key is for all the switches in the network to elect a root bridge that becomes the focal point in the network. All other decisions in the network, such as which port to block and which port to put in forwarding mode, are made from the perspective of this root bridge. A switched environment, which is different from a bridge environment, most likely deals with multiple VLANs. When you implement a root bridge in a switching network, you usually refer to the root bridge as the root switch. Each VLAN must have its own root bridge because each VLAN is a separate broadcast domain. The roots for the different VLANs can all reside in a single switch or in various switches. 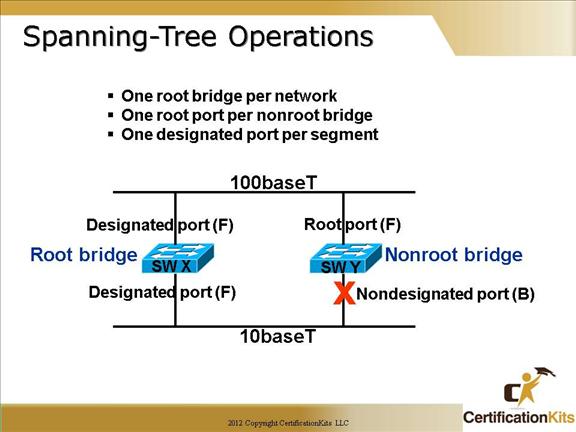 STP’s job is to find all links in the network and shut down any redundant ones, thereby preventing network loops from occurring.  STP performs this in three steps: 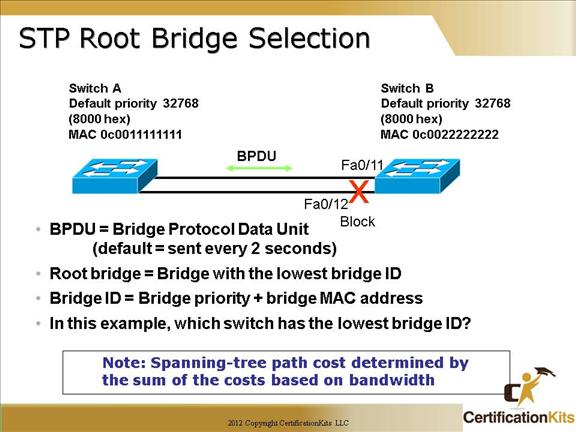 To determine the root bridge, the priorities of the bridge and the MAC address are combined.  If two switches or bridges happen to have the same priority value, then the MAC address becomes the tie breaker for figuring out which one has the lowest (best) ID.

The following is used to elect a root bridge in a STP topology:

üBridge ID (combination of priority and Mac address of the bridge)

Note: Since the lowest Bridge ID wins in the case of the bridge priority being the same on multiple switches, you can potentially have your oldest / slowest switch become the root bridge.  This is because the first portion of the MAC address is the organizational unique identifier (OID) and the second portion is essentially a serial number.  Since in a single vendor environment the older serial number typically equates to a older box, then a lower MAC would typically equate to an older / slower box.

A good rule of thumb is to chose a device to be the root bridge and another to be the backup and set the priority on those respective boxes accordingly and not leave things to chance. 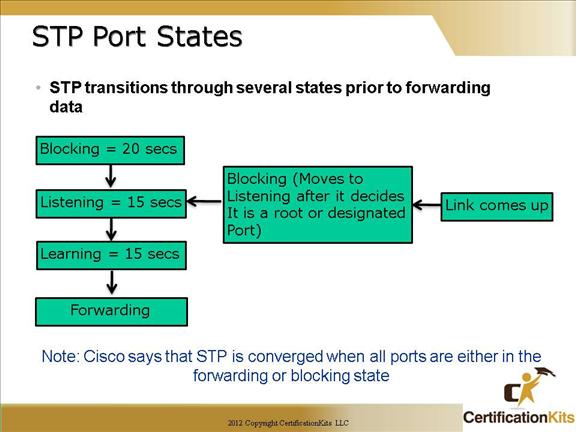 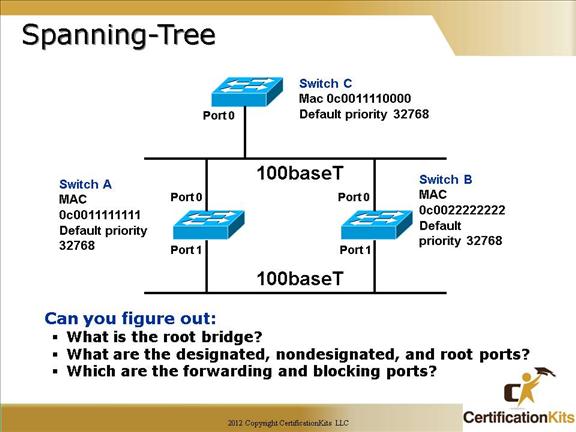 Root Bridge: Switch C due to being the lowest MAC since all switch priorities are the same

Designated Ports: Port 0 on Switch C and port 1 on Switch A

Nondesignated Ports: Port 1 on Switch B

Root Ports: Port 0 on Switches A and B

Forwarding Ports: All ports on Switch C, ports 0 and 1 on Switch A and port 0 on Switch B

Blocking Ports: Port 1 on Switch B

It is a good idea to set the spanning tree priority of a device.  Otherwise the lowest MAC will become root bridge.  As described on the previous slide, most of the time this turns out to be the oldest piece of equipment on the network.  Sometimes it is unstable, and in this instance can cause instability on the network if ports are in blocking state.

As a best practice, setup the priorities in order that a primary and secondary are chosen based on priority, and no ports are actively blocking.  This way, if the state changes, the port does not have to go through the blocking, listening, learning and forwarding states for each fail-over.  This can still offer sufficient loop protection while significantly reducing the convergence times of the network if designed carefully. 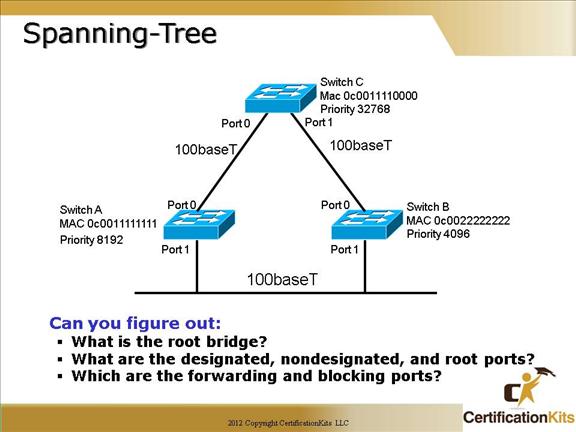 Root Bridge: Switch B due to having the lowest priority

Designated Ports: Ports 0 and 1 on Switch B and port 0 on Switch A

Root Ports: Port 1 on switch A, Port 1 on Switch C