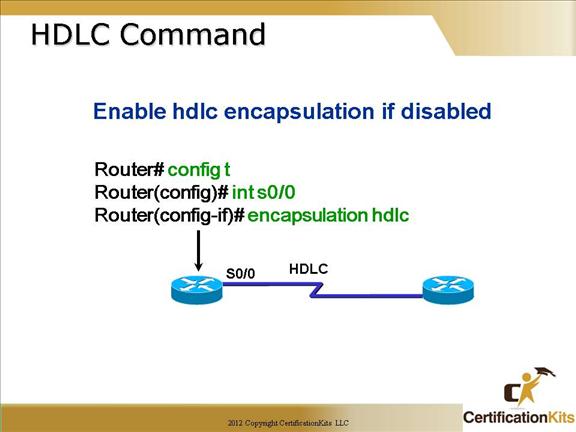 Cisco CCNA An Overview of PPP 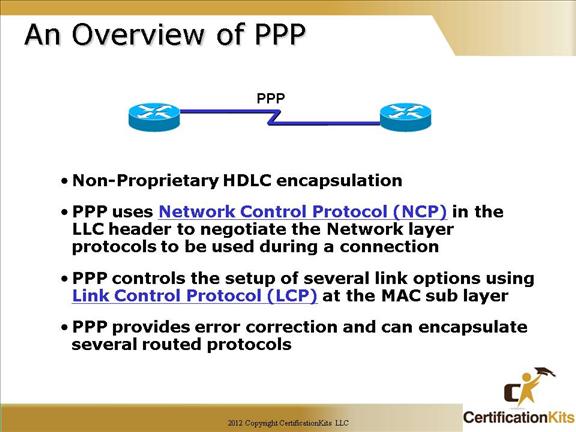 PPP does not work by default on Token Ring and Ethernet LAN’s. You must run PPoE and PPoT (tunneling). 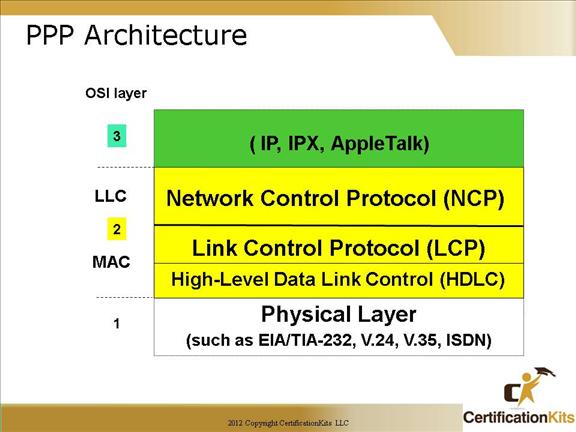 A method for encapsulating datagrams over serial links.

A method of establishing, configuring, maintaining, and terminating the point-to-point connection. 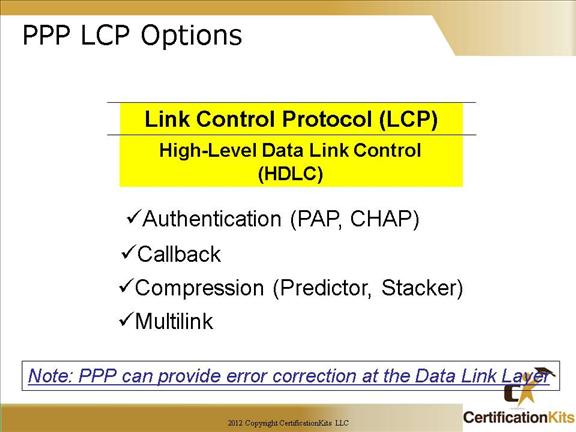 This option tells the calling side of the link to send information that can identify the user. The two methods are PAP and CHAP.

This is used to increase the throughput of PPP connections by compressing the data or payload prior to transmission. PPP decompresses the data frame on the receiving end.

Starting in IOS version 11.1, multilink is supported on PPP links with Cisco routers. This option allows several separate physical paths to appear to be one logical path at layer 3.  For example, two T-1s running multilink PPP would appear as a single 3Mbps path to a layer-3 routing protocol. 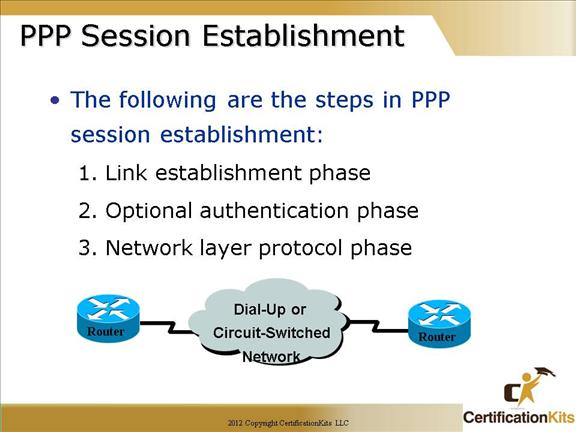 When PPP connections are started, the links go through three phases of session establishment:

If required, either CHAP or PAP can be used to authenticate a link. Authentication takes place before Network layer protocol information is read.

PPP uses the Network Control Protocol to allow multiple Network layer protocols to be encapsulated and sent over a PPP data link. 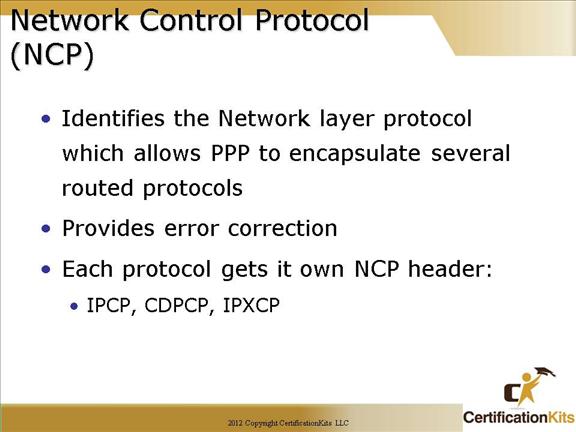 It operates on the Data Link layer. 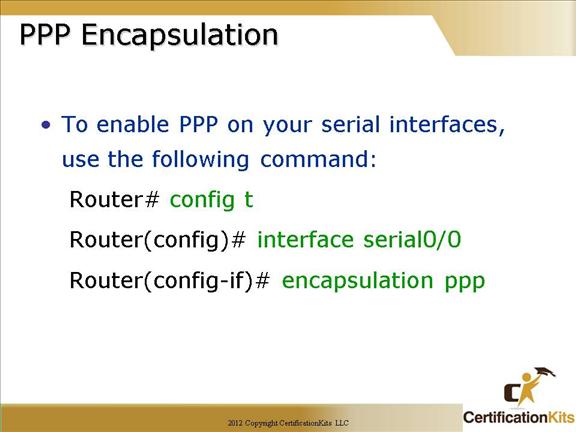 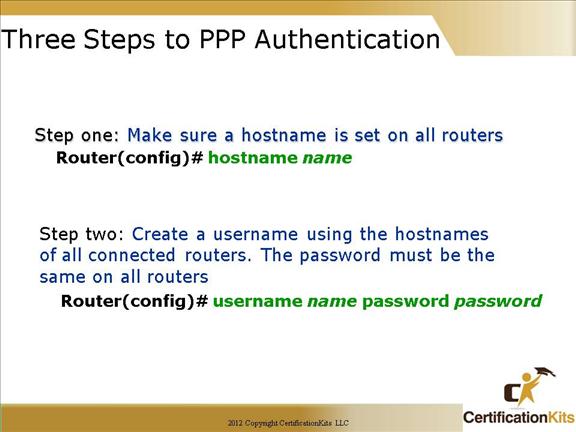 After you configure your serial interface to support PPP encapsulation, you can then configure authentication using PPP between routers.

First set the hostname of the router if it is not already set.

Then set the username and password for the remote router connecting to your router. 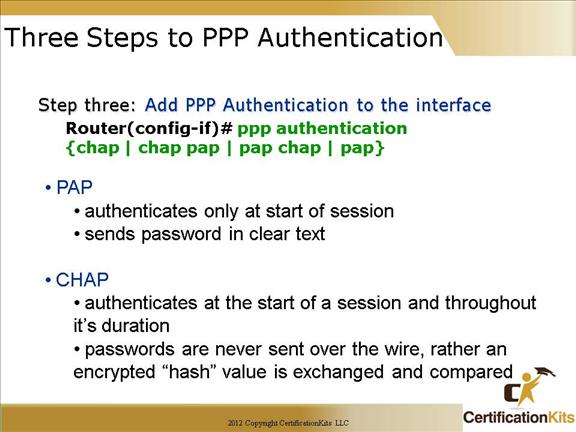 There are two types of authentication protocols: PAP and CHAP.

PAP provides a simple method for a remote node to establish its identity using a two-way handshake.

PAP is done only upon initial link establishment.

PAP is not a strong authentication protocol.  It provides no encryption.  It may be fine in DDR environments when the password changes each time a user authenticates.

CHAP is the preferred protocol.

CHAP is done upon initial link establishment and can be repeated any time after the link has been established.

CHAP transactions occur only when a link is established. The local access server does not request a password during the rest of the session.

(The local access server can, however, respond to such requests from other devices during a session.)

CHAP is specified in RFC 1334. It is an additional authentication phase of the PPP Link Control Protocol. 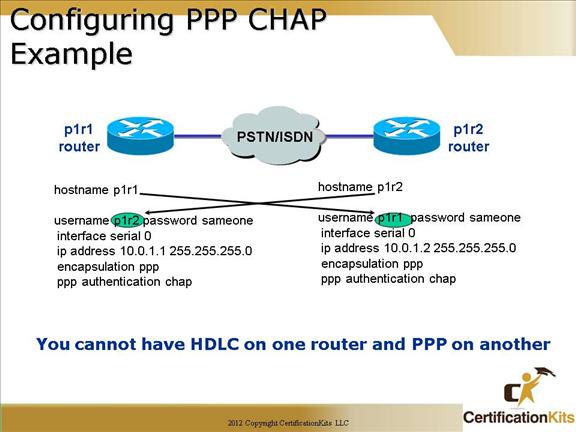 Keep in mind the use of the hostname in this configuration.  Where this is applied will need to be updated if someone needed to change the router’s hostname.

Another note is that CHAP uses a level 7 password that can be cracked if someone accesses the router configuration.