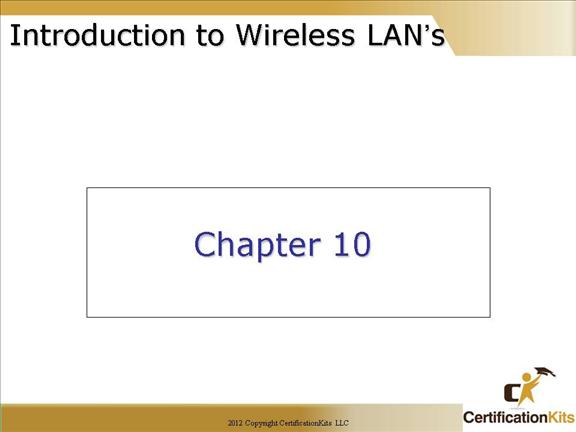 This chapter will cover Wireless LAN’s. 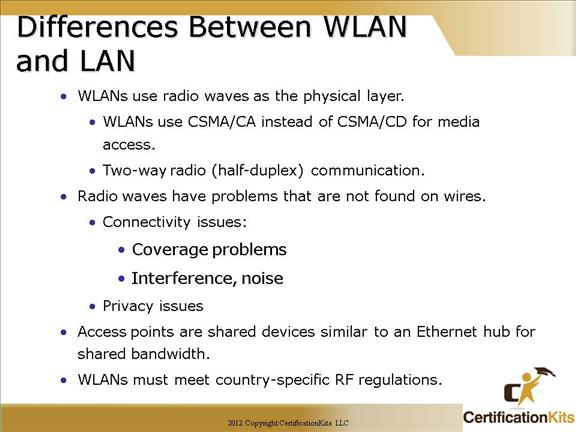 Following is an explanation of how WLANs differ from LANs.

-> In WLANs, radio frequencies are used as the physical layer of the network.

– WLANs use CSMA/CA (Carrier Sense Multiple Access with Collision Avoidance) instead of CSMA/CD (Carrier Sense Multiple Access with Collision Detection) that is used by Ethernet LANs. Collision detection is not possible because a sending station cannot receive at the same time that it is transmitting and, therefore, cannot detect a collision. Instead, the Request to Send (RTS) and Clear to Send (CTS) protocols are used to avoid collisions.

– WLANs use a different frame format than wired Ethernet LANs. Additional information for WLAN is required in the Layer 2 header of the frame.

-> Radio waves have problems not found in wires.

– Connectivity issues in WLANs can be caused by coverage problems, RF transmission, multipath distortion, and interference from other wireless services or other WLANs.

– Privacy issues are possible because radio frequencies can reach outside the facility.

-> In WLANs, mobile clients connect to the network through an access point which is the equivalent for a wired ethernet hub.

– Mobile clients do not have a physical connection to the network.

– Mobile devices are often battery powered as opposed to being electrically powered as they are for LANs.

– The aim of standardization is to make WLANs available worldwide. Because WLANs use radio frequencies, they must follow country-specific regulations of RF power and frequencies. This requirement does not apply to wired LANs. 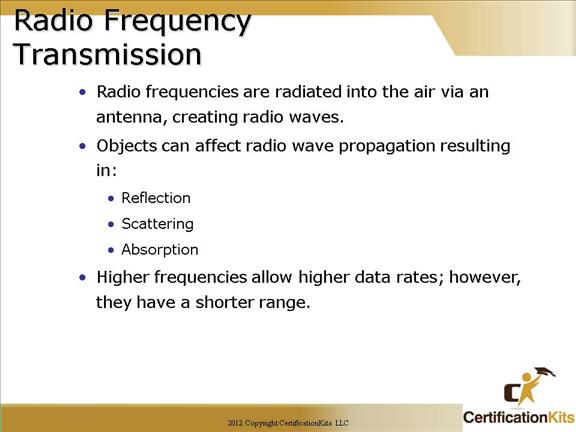 The transmission of radio waves is influenced by the following factors:

Scattering: Occurs when RF waves strike an uneven surface (for example, a rough surface) and are reflected in many directions.

Absorption: Occurs when RF waves are absorbed by objects (for example, walls).

The following rules apply for data transmission over radio waves: 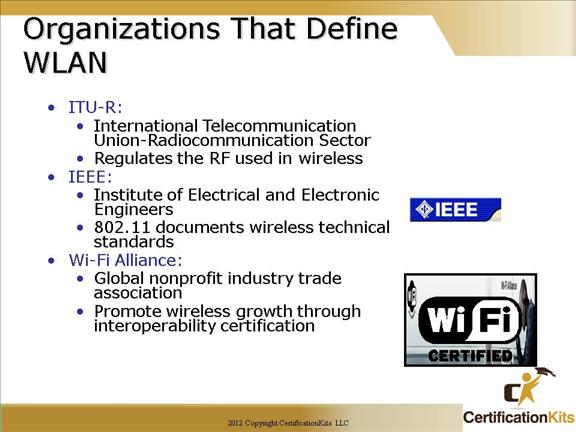 The IEEE defines standards. 802.11 is part of the 802 networking standardization. You can download ratified standards from the IEEE website (http://standards.ieee.org/getieee802).

The Wi-Fi Alliance offers certification for interoperability between vendors of 802.11 products. This certification provides a comfort zone for the users who are purchasing the products. It also helps to market the WLAN technology by promoting interoperability between vendors. Certification includes all three 802.11 RF technologies and Wi-Fi Protected Access (WPA), a security model released in 2003 based on the new security standard IEEE 802.11i, which was ratified in 2004. The Wi-Fi promotes and influences WLAN standards. Ratified products can be found on the Wi-Fi website (http://www.wi-fi.org). 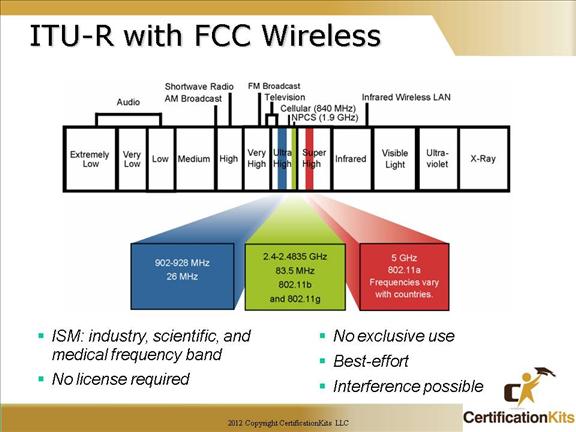 There are three unlicensed bands: 900 MHz, 2.4 GHz, and 5.7 GHz. The 900-MHz and 2.4‑GHz bands are referred to as the Industrial, Scientific, and Medical (ISM) bands, and the 5‑GHz band is commonly referred to as the Unlicensed National Information Infrastructure (UNII) band.

Frequencies for these bands are as follows:

The figure shows WLAN frequencies. Next to the WLAN frequencies in the spectrum are other wireless services such as cellular phones and NPCS (Narrowband Personal Communication Services). The frequencies used for WLAN are ISM bands.

Even though three frequency bands do not require a license to operate equipment, they still have certain local country code regulations inside the frequencies to limit characteristics such as transmitter power, antenna gain which increases the effective power, and the total summation of transmitter, cable, and antenna.

Effective Isotropic Radiated Power (EIRP) is the final unit of measurement used by local country regulatory. Therefore caution should be used when attempting to replace a component of wireless equipment such as an antenna to increase range. The possible result could be a total wireless system that is illegal for the local codes.

Note : Only use antennas and cables supplied by the original manufacture listed for the specific access point implementation. Only used qualified technicians who understand the many different variations and requirement to comply with local RF country regulatory codes. 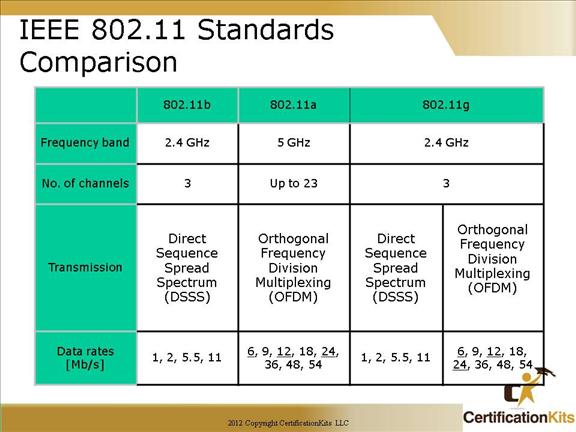 The original 802.11 wireless standard was completed in June 1997, revised in 1999 (802.11a/b) and reaffirmed in 2003 (802.11g). The IEEE standard defines the physical layers and MAC sub-layer of the Data-Link layer of the OSI model. Be design the standard does not address upper layers of the OSI model. Three modulation techniques of Infrared (IR), Frequency Hopping Spread Spectrum (FHSS), and Direct Sequence Spread Spectrum (DSSS) where originally defined. Light based IR medium quickly became obsolete leaving FHSS and DSSS for most implementations.

FHSS transmissions jump frequencies in a defined algorithm to minimize interference while DSSS uses just one channel that spreads the data across all frequencies defined by that channel. Since both technologies use a different approach to minimizing interference, they are mutually incompatible.

The IEEE 802.11 divided the 2.4GHz ISM band into 14 channels, however local regulatory such as FCC designate which channels are allowed such as channels 1 through 11 for FCC in the United States. Each channel of 2.4 GHz ISM band is 22 MHz wide with 5 MHz separation resulting in overlap with channels before or after a defined channel for usage. Therefore a separation of 5 channels is needed to ensure unique non-overlapping channels. Given the FCC example of 11 channels, the maximum of non-overlapping frequencies are channels 1, 6, and 11.

[Text Continued on next page] 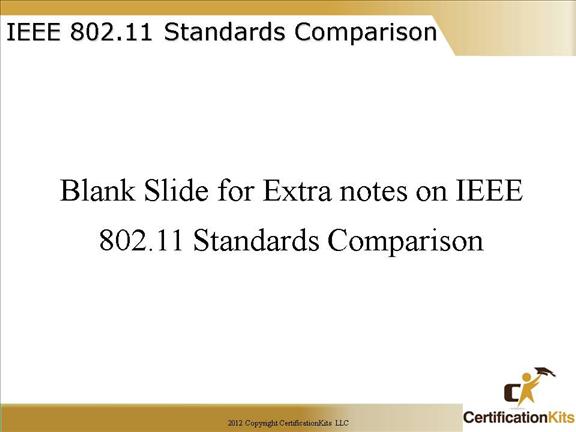 Recall earlier that wireless is a half-duplex communication and therefore the basic throughput is only about half of the data rate. Therefore, IEEE 802.11b main development goal was to achieve higher data rates within the 2.4 GHz ISM band and therefore continue the growing Wi-Fi consumer market and acceptance.

802.11b defined the usage of DSSS with newer encoding or modulation of Complementary Code Keying (CCK) for higher data rates of 5.5, and 11 Mbps over that prior Barker Coding of 1 and 2 Mbps. 802.11b still used the same 2.4 GHz ISM band and was backward compatible with prior 802.11 and it’s associated data rates of 1 and 2 Mbps.

During the same year as 802.11b, IEEE developed another amendment known as 802.11a. This standard was motivated by the continued goal of increasing data rate through a different Orthogonal Frequency Division Multiplexing (OFDM) spread spectrum and modulation technology and to use a less crowded frequency of 5 GHz UNII. The 2.4 GHz ISM band was widely used for all thing wireless such as Bluetooth, cordless phones, monitors, video, home gaming consoles, and also happens to be the same frequency used by microwave ovens to heat water and food at high energy. The 802.11a was not as widely known since materials for chip manufacturing was less readily available and initially resulted in higher cost. Most all applications requirements were satisfied by the cheaper and widely available 802.11b. 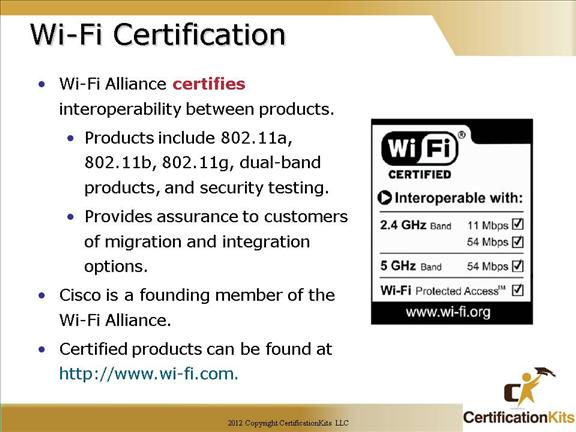 The Wi-Fi Alliance is a global, nonprofit industry trade association devoted to promoting the growth and acceptance of wireless LANs. One of the primary benefits of the Wi-Fi Alliance is to ensure interoperability among 802.11 products offered by various vendors by providing certification.

This certification provides a comfort zone for the users purchasing the products because of the certified vendor interoperability. Certification includes all three IEEE 802.11 RF technologies, as well as early adaption of pending IEEE drafts such as security. The Wi-Fi Alliance adapted IEEE 802.11i draft security as Wi-Fi Protected Access (WPA), and then revised to WPA2 after final release of IEEE 802.11i.