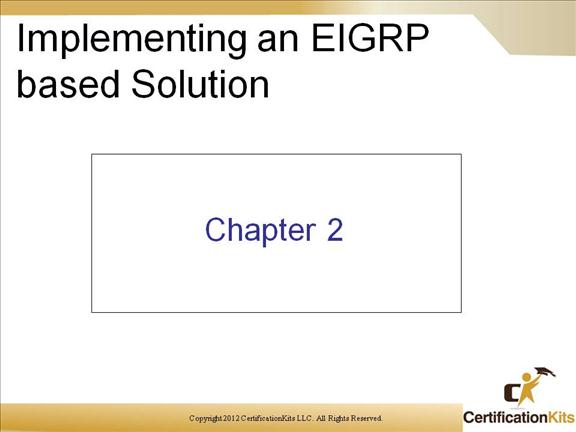 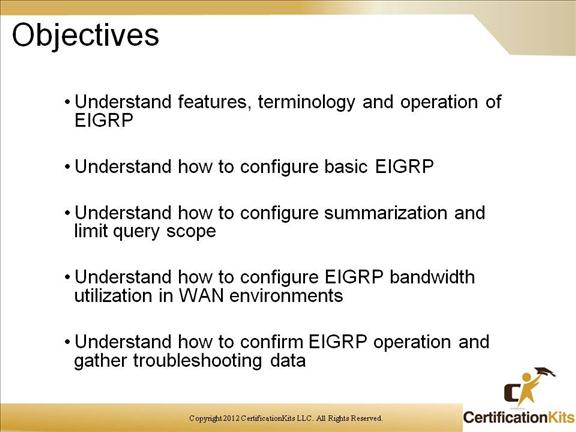 Ah, Enhanced IGRP.  Cisco’s proprietary routing protocol.  The objectives of this chapter is to: 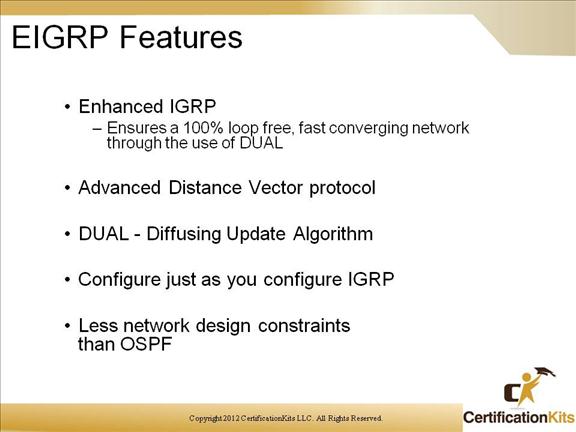 Enhanced Interior Gateway Routing Protocol (EIGRP) is a Cisco Proprietary Routing Protocol.  It has the same metrics as IGRP.  It uses Diffusing Update Algorithm (DUAL) to guarantee a loop free topology.  EIGRP uses less CPU resources than OSPF while also having fewer design constraints.  It is considered an advanced distance vector routing protocol although it has some similarities to a link state routing protocol. 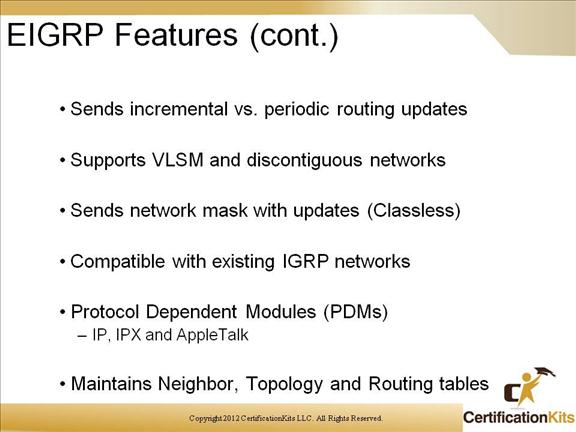 EIGRP, like OSPF communicates via multicast transmissions.  The multicast address that EIGRP uses is 224.0.0.10.

EIGRP supports VLSM because it will send the prefix, or mask information along with all of its routing updates.  EIGRP by default will automatically summarize to the classful boundary, however you can turn this feature off using the no auto-summary command under the EIGRP router configuration mode.

In the event you have IGRP configured in your network, EIGRP will do automatic redistribution in order to learn all of the available routes within IGRP.

EIGRP keeps separate neighbor tables, topology tables and routing tables for each of the protocols you have configured in your network environment. 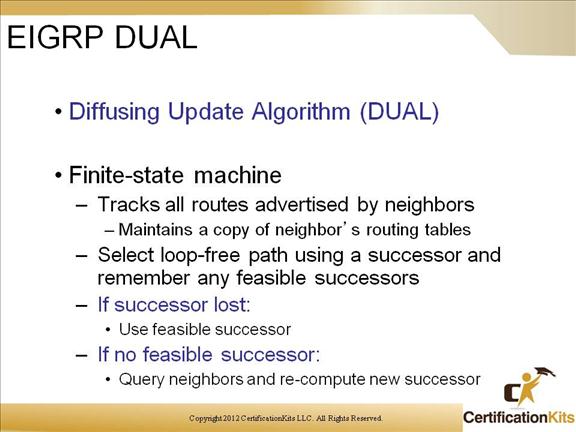 Depends upon complete reliability of communications between routers: 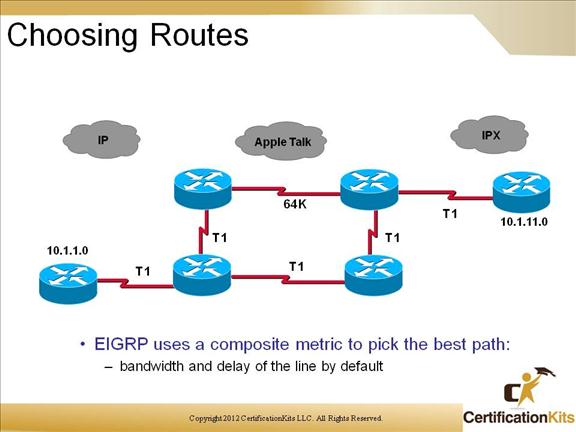 BW is the lowest bandwidth of the links along the paths

By default, metric = lowest bandwidth in path + sum of all delays along path 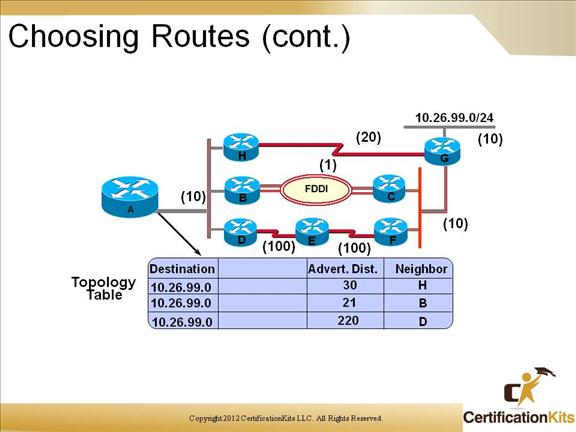 Here we are viewing a topology table.  We are trying to identify the best route (successor) from RouterA to network 10.26.99.0 on Router G. 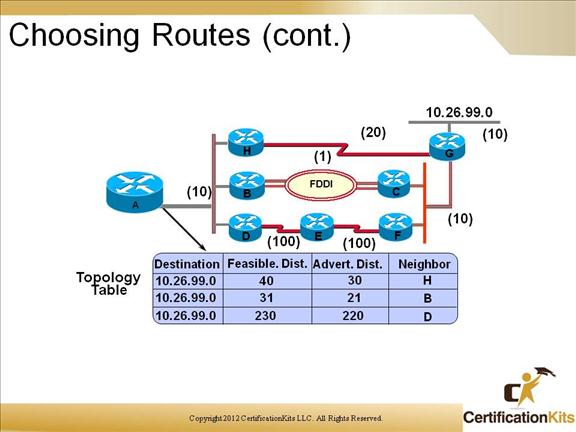 Now that we have found the Feasible Distance for all of our neighbors, we can now define the Successor and see if we have a valid feasible successor available.

The Successor will be the least cost path to the remote network.

The next best route does not automatically become the feasible successor, the route has to match certain criteria.

The Feasible successor must have an advertised distance less than the current successors feasible distance. 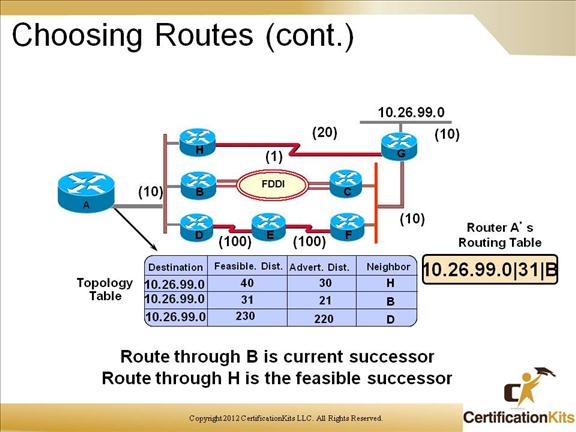 Route through B is current successor because it has the least cost path to network 10.26.99.0.

Route through H is the feasible successor because it has an AD less than the currents Successors FD to network 10.26.99.0. 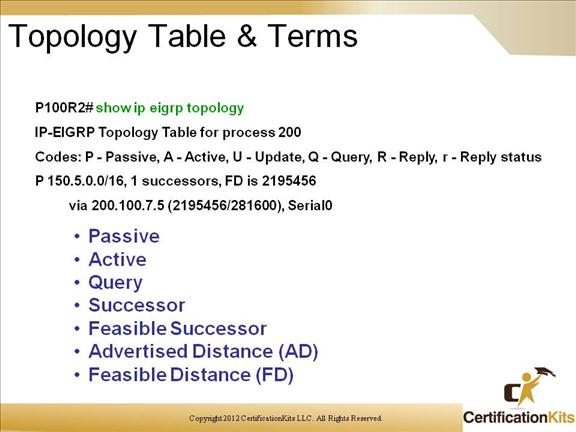 In order to view the EIGRP topology table enter the following command:

Passive:        A route is passive if it is up and no changes are occurring

Active:         A route is active if it is down and the EIGRP process is actively trying to find a replacement

Query:          A query happens with the Successor Route goes down and there is no known Feasible successor.

Advertised Distance:    Distance to a remote network from the perspective of the advertising router

Feasible Distance:     Distance to a remote network from my perspective which includes the cost of  getting to the neighbor that provided the advertised distance 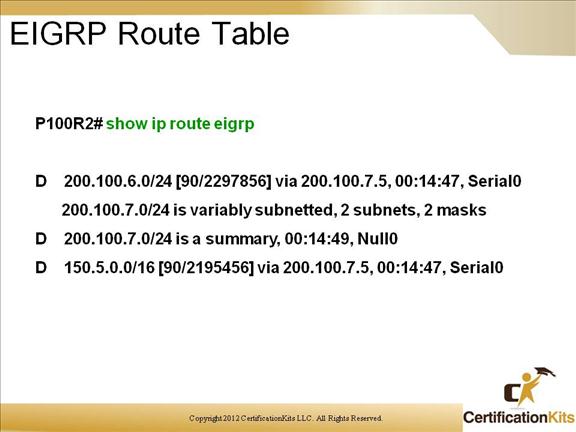 The EIGRP routing table represents the best routes found by EIGRP.  These routes will be presented to the Route processor for it to decide if they should be placed in the forwarding table (the routers routing table). 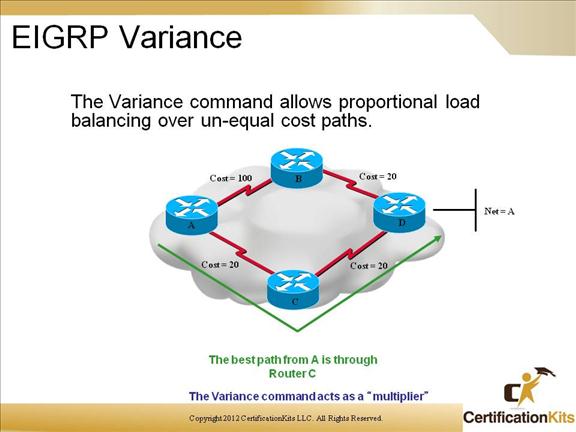 The following example illustrates the syntax: 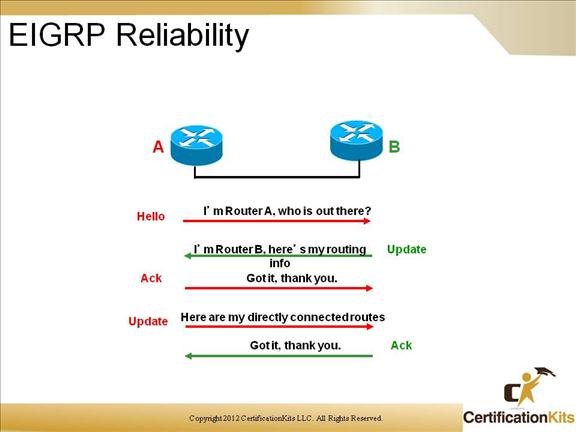 Update – used to convey reachability of destinations. When a new neighbor is discovered, update packets are sent so the neighbor can build up its topology table. In this case, update packets are unicast. In other cases, such as a link cost change, updates are multicast. Updates are always transmitted reliably.

Query – always multicast unless they are sent in response to a received query. In this case, it is unicast back to the successor that originated the query.  Queries are transmitted reliably.

EIGRP unreliable packets are packets that do not require explicit acknowledgement: 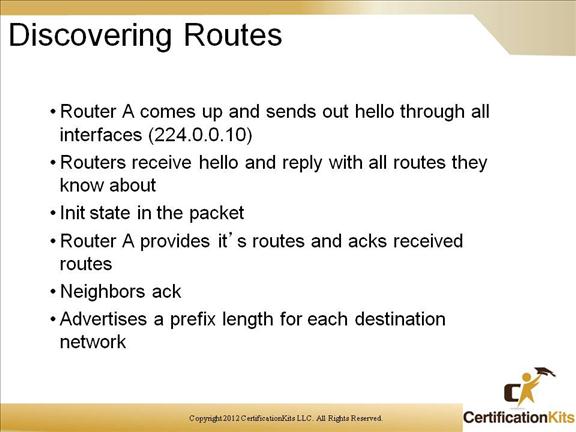 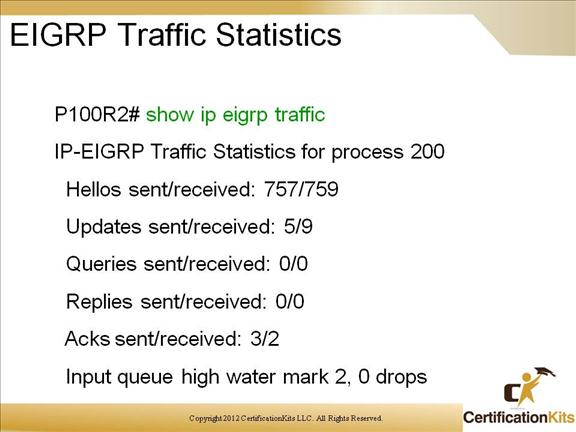 To find out EIGRP traffic statistics, such as how may hellos/updates/queries/replies and acknowledgements have been sent and received, you should issue the following IOS command: 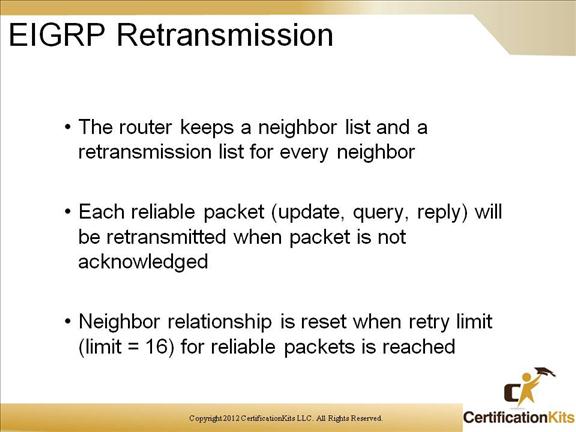 EIGRP transport has window size of one (stop and wait mechanism).  Every single reliable packet needs to be acknowledged before the next sequenced packet can be sent.  If one or more peers are slow in acknowledging, all other peers suffer from this.

Solution: The non-acknowledged multicast packet will be retransmitted as a unicast to the slow neighbor 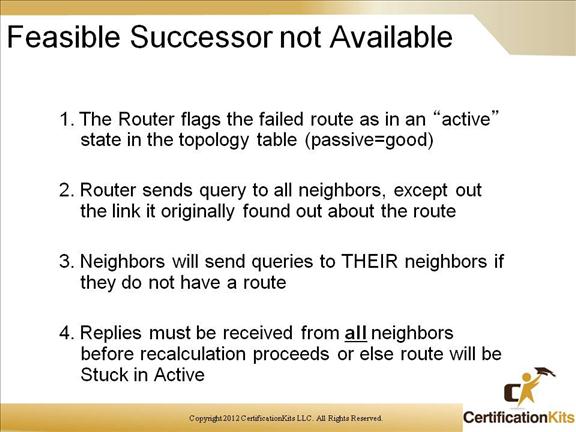 If your successor is lost, and your DUAL was unable to find a feasible successor a query is sent out to all of the EIGRP neighbors.  Each neighbor should respond to the query, if there is no response to the query, the route will become stuck in active.  If all neighbors do respond, EIGRP evaluates their responses and calculates the most appropriate route to become the Successor.

In some circumstances, it takes a very long time for a query to be answered. So long, in fact, that the router that issued the query gives up and clears its connection to the router that isn’t answering, effectively restarting the neighbor session.

The most basic SIA routes occur when it simply takes too long for a query to reach the other end of the network and for a reply to travel back. One of the most effective techniques for containing EIGRP queries is to use route summarization or stub networks.

Stub networks are configured in a hub and spoke network and is configured only on the stub router.  The command is