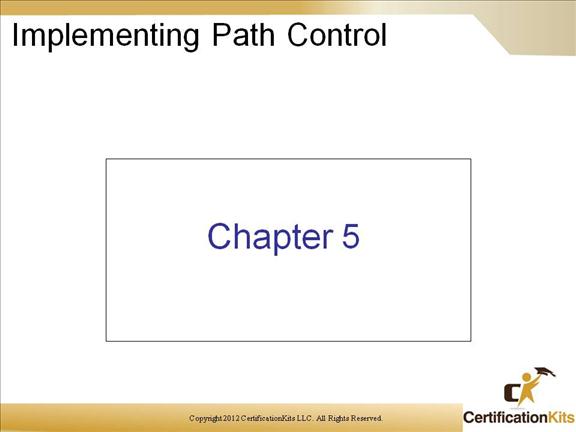 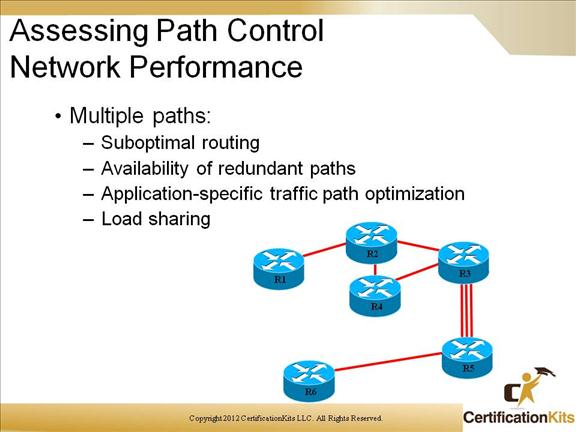 Networks are designed to provide high availability and redundancy. Each routing protocol has a different administrative distance, metric, and convergence time. The use of different routing protocols and different connectivity options may result in inefficient paths for forwarding packets to their destinations.

When more than one routing protocol is implemented, there is high probability of inefficient routing. One major mistake is incorrectly implementing two-way multipoint redistribution. Two-way redistribution requires careful planning. 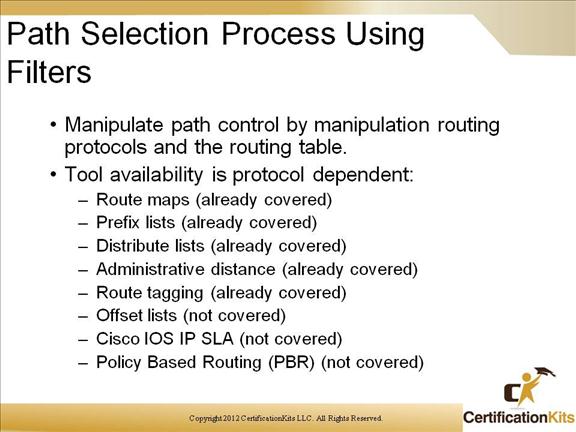 Several filters or tools can be used to manipulate the routing table: 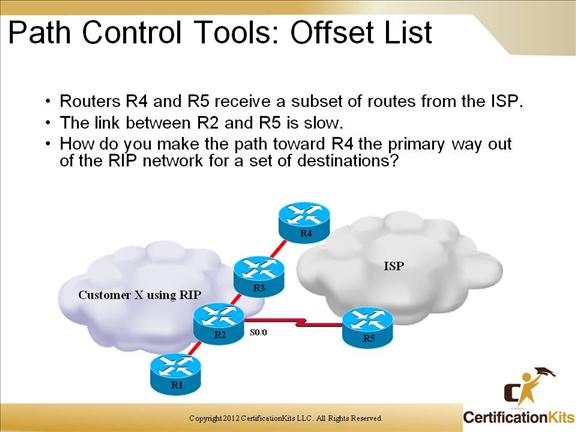 In the example above, Customer X is using Routing Information Protocol (RIP) and is connected to the ISP via edge routers R4 and R5.  A subset of routes is received from each of the edge routers, and RIP increases the cost at every new hop. The metric (in RIP metric = hop count) for routes from R1 to R4 is greater than for routes from R1 to R5 although the path through R4 is actually more desirable due to the serial link between R2 and R5.  Which configuration should be applied to R2 to prefer the path toward R4, which is must faster? The configuration should take into account that this rule is only valid for a set of destinations.  Using offset-lists are great for this type of scenario. 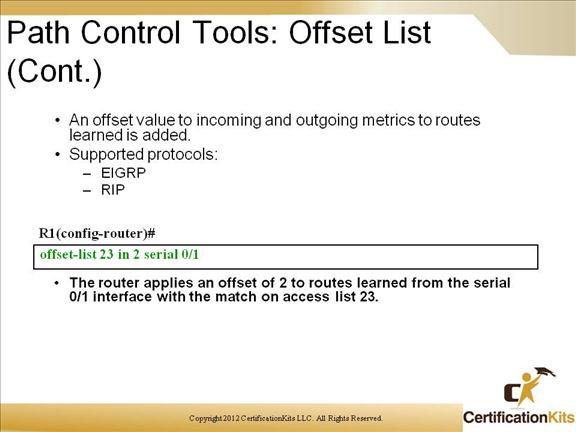 In the example, the offset-list 23 in 2 serial 0/1 command is used to apply an offset of 2 to routes that are learned from serial 0/1 with the match on access list 23. The command is entered into the RIP process configuration mode on R2. This causes the cost of a selection of routes coming from the serial 0/1 interface to be increased, effectively making it worse than the path toward R4. 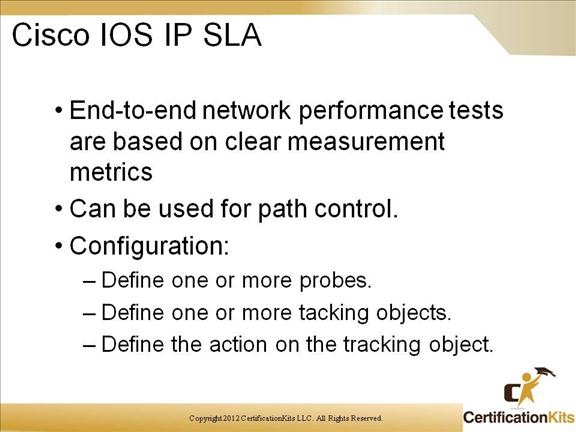 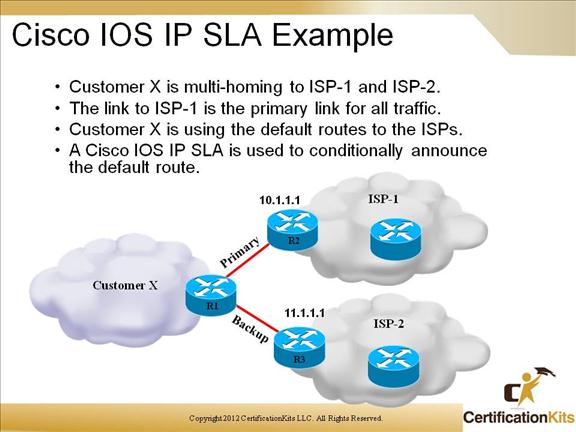 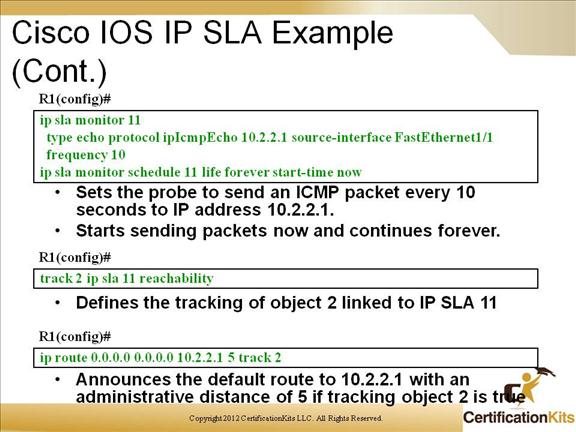 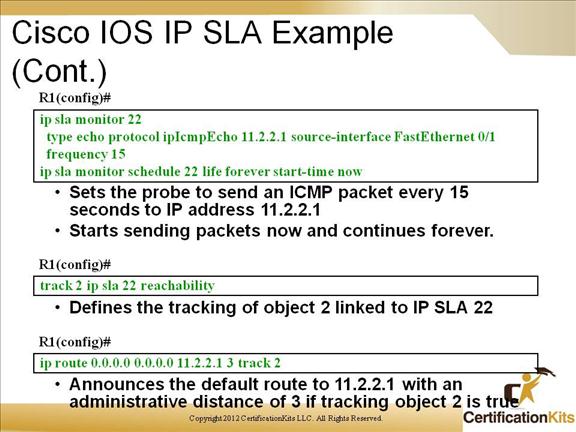 This example shows R1 being multi-homed to two ISPs.

The configuration is similar to the previous example except that the probe number is different because the test condition tests the reachability of the backup ISP destination address.  The tracking object is also different due to it being related to a different probe.  The announced default route uses a higher administrative distance (AD) of 3 since it is the backup, hence this ISP is only used if the primary is not available. 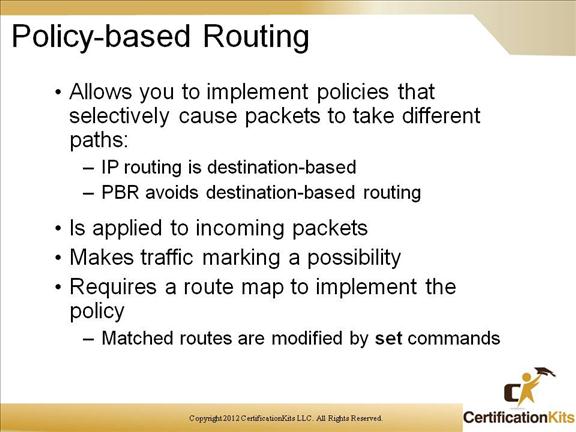 Policy-based Routing (PBR) offers significant benefits when attempting to control traffic in the internetwork.  PBR adds flexibility by giving network administrators the ability to route traffic based on network needs.

PBR is used to bypass the routing table. It allows network administrators to configure different routing rules outside the boundaries of the original IP routing table.  One of the main uses of PBR is to route packets that are based on the source IP address instead of the destination IP address. PBR is applied to incoming packets and is implemented using route maps, for which match commands are used to match the incoming packets while set commands are used to change the default destination-based routing. 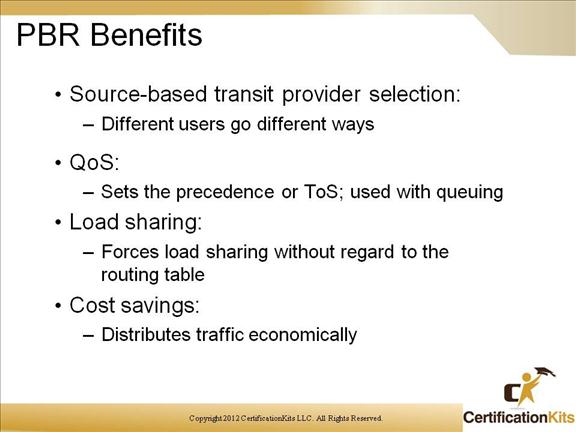 Benefits of implementing PBR in a network:

Source –based transit provider selection: ISPs and the like use PBR to route traffic originating from different users through different Internet connections using Policy Based Routing (PBR).

Quality of Service (QoS): QoS is used to set the precedence or Type of Service (ToS) in the IP header.  Queuing is leveraged to prioritize traffic in the network. 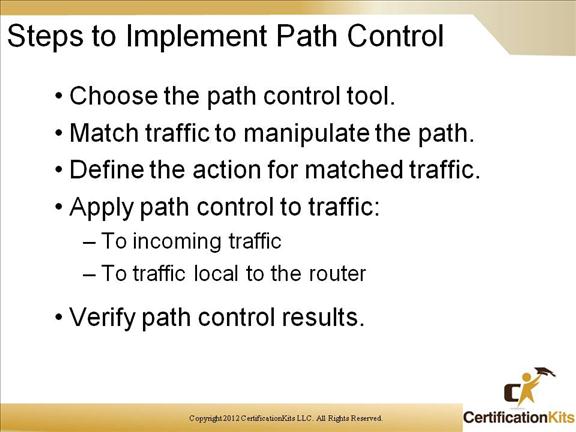 There are several steps involved when implementing path control.  The steps are listed in the slide above.