Get Your CCNP Lab Kit Here!

How to Build a CCNP Lab! 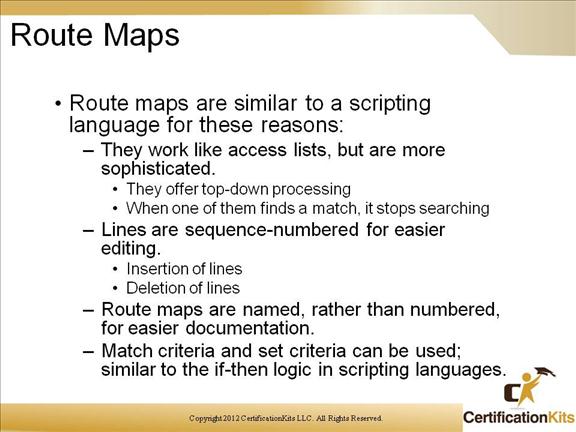 Route-maps have may features in common with ACLs.  For example:

They are an ordered sequence of individual statements, each has a permit or deny result. Evaluation of ACL or route-maps consists of a list scan, in a predetermined order, and an evaluation of the criteria of each statement that matches. A list scan is aborted once the first statement match is found and an action associated with the statement match is performed.

These are some of the differences between route-maps and ACLs:

The main result from the evaluation of an access list is a yes or no answer—an ACL either permits or denies input data. Applied to redistribution, an ACL determines if a particular route can (route matches ACLs permit statement) or can not (matches deny statement) be redistributed. Typical route-maps not only permit (some) redistributed routes but also modify information associated with the route, when it is redistributed into another protocol.

Route-maps are more flexible than ACLs and can verify routes based on criteria which ACLs can not verify. For example, a route-map can verify if the type of route is internal or if it has a specific tag.

Each ACL ends with an implicit deny statement, by design convention; there is no similar convention for route-maps. If the end of a route-map is reached during matching attempts, the result depends on the specific application of the route-map. 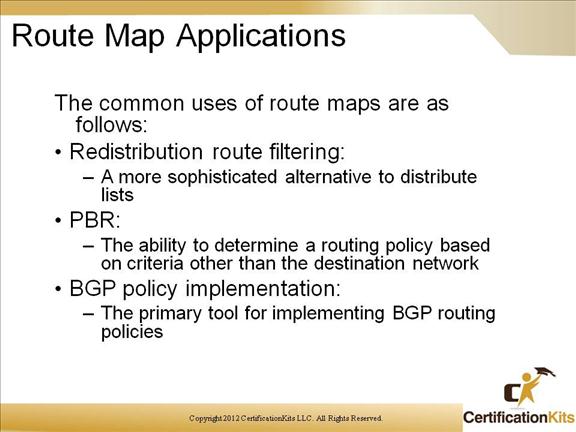 Policy based routing (PBR) is implemented utilizing route maps that can match things such as source and destination addresses, protocol types and end-user applications. 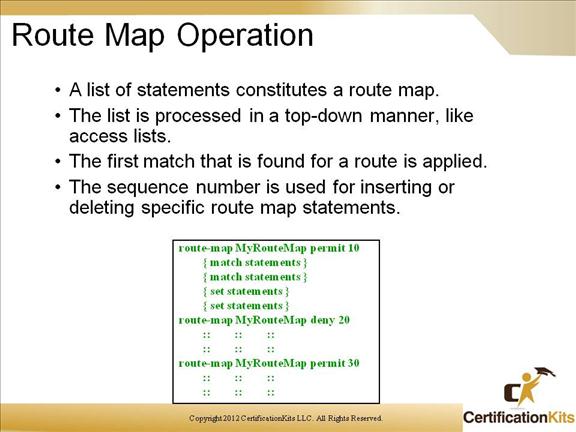 A route map is processed in a top-down manner.  Once a match is found, the action is applied.  Sequence numbers are used for specific route map statements.  Each line has either a permit or deny statement.  Route maps stop processing when a match is found.  If the match is on a permit statement he router sets the metrics or other defined conditions and permits the redistribution of that route.  If the packer matched a deny statement the route is not redistributed. 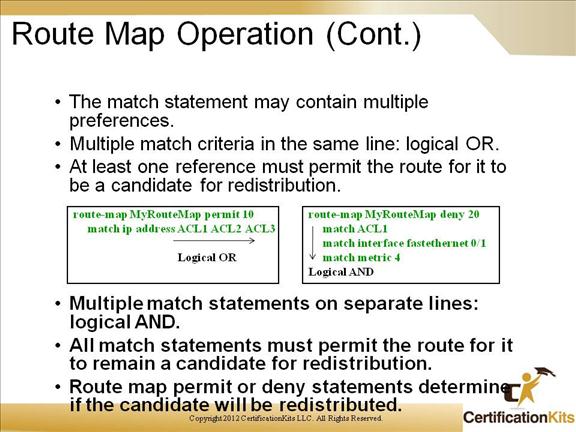 Route maps may consist of multiple route map statements which are processed top-down, similar to an access-list.  Processing stops when the first match is found. 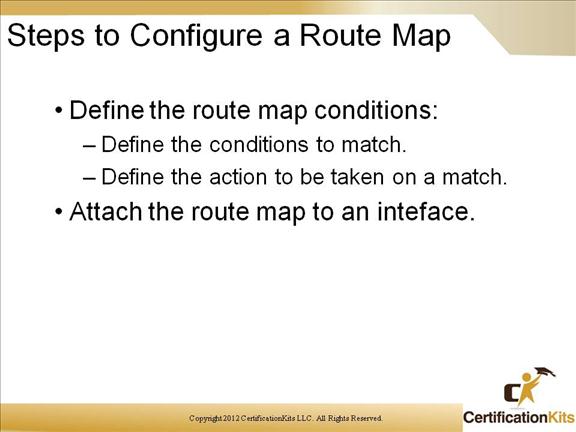 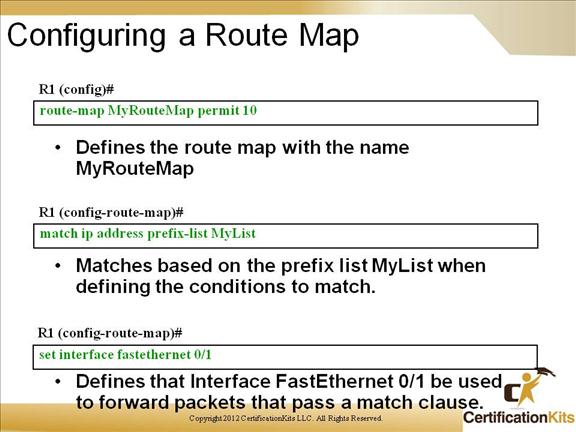 The above example lists the commands required to configure a route map.

First you define the route map and specify either a permit or deny.   Next you define the match criteria.  Lastly you define what to do when a match is found.  Example is setting the interface for the next hop.

Cisco CCNP ROUTE Attaching a Route Map to an Interface 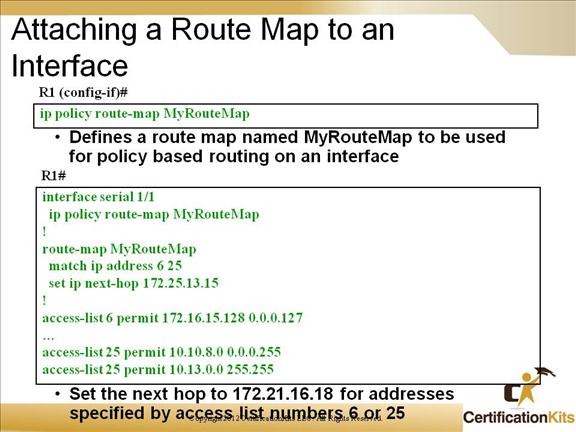 Remember, route maps need to be attached to an interface with the ip policy route-map command.

Access lists (6 and 25 in the example on the slide) can be used within route maps. 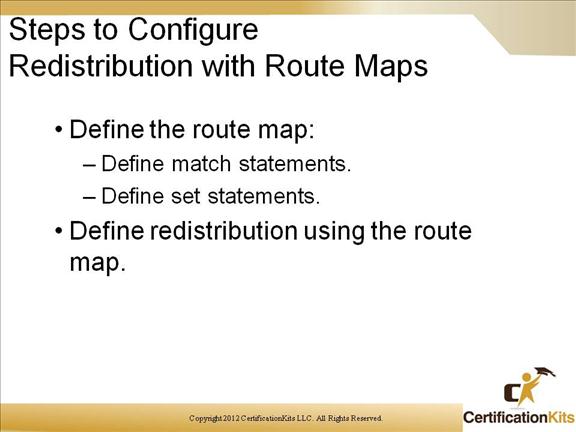 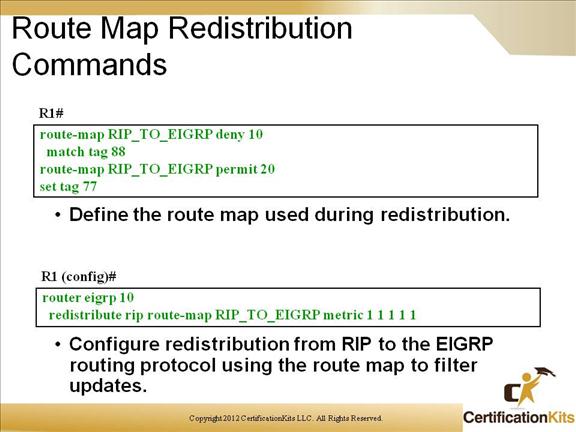 The above example shows a route map being utilized when redistributing RIP routes into EIGRP.

Route maps are used in conjunction with match and set commands. 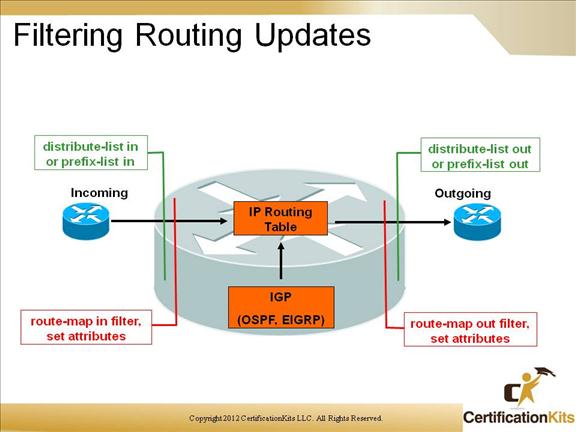 Again, there are numerous ways to filter routes between routing protocols.  Example are distribute-lists, prefix-lists and route-maps.

Incoming prefix lists, incoming distribute lists and incoming route maps must permit the routes that are received from a neighbor before they are accepted into the IP routing table.

Outgoing routes must pass outgoing distribute lists, outgoing prefix lists and outgoing route maps before they with be transmitted to a neighbor. 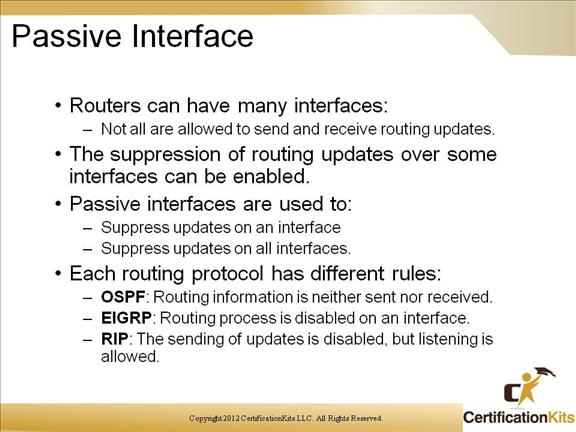 Passive interfaces work differently depending on the routing protocol being used.  They can be used to suppress updates on a specific interface or on all interfaces. 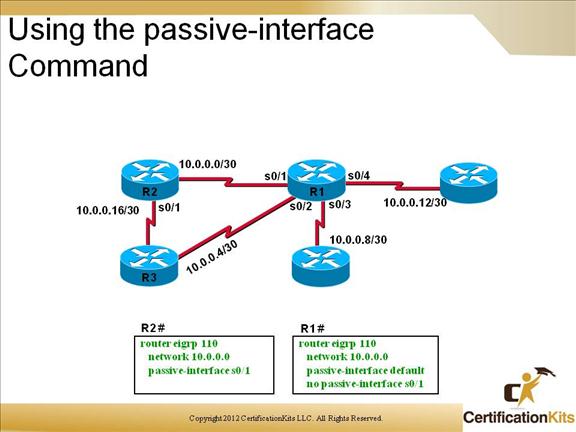 The above example shows the use of the passive-interface command when using EIGRP as the routing protocol.

The configuration of R1 initially sets all interfaces to passive then enables interface s0/1 as not passive with the no passive-interface s0/1 command. 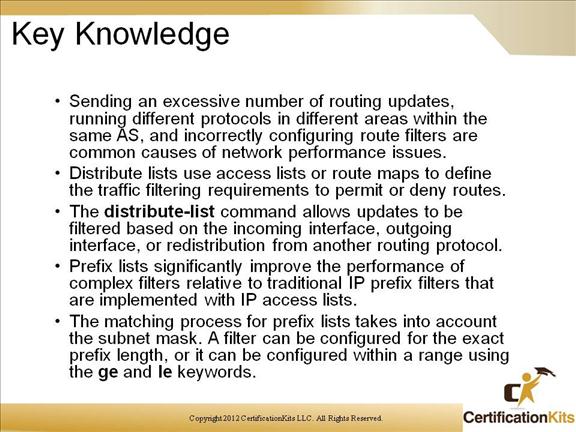 Key knowledge to know with regards to route filtering and route redistribution. 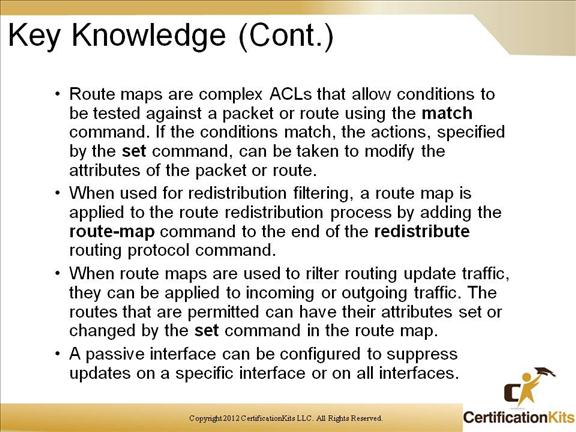 Continuation of key knowledge to know with regards to route filtering and route redistribution.