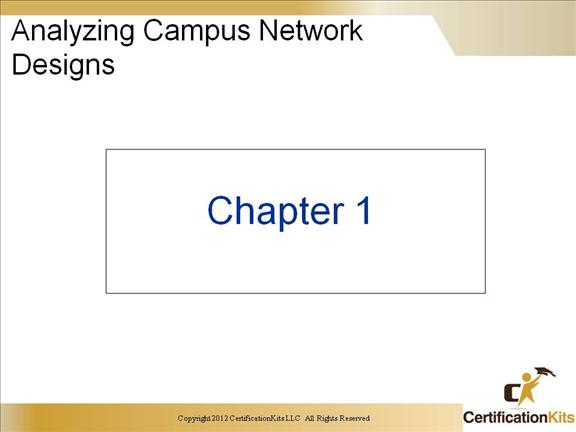 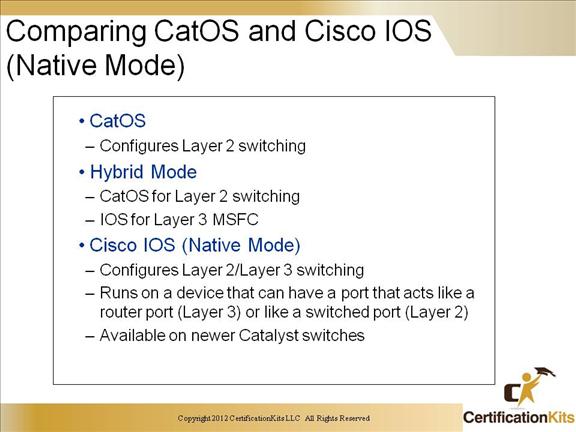 Everywhere you look in Cisco’s documentation you’ll find that famous phrase “consistency is the key”.  Well throw that out the window!  Inconsistency is the key when it comes to Cisco switches and their operating systems.  Yes, there is a logical explanation.  Just because the label says Cisco doesn’t mean they were actually “born” at Cisco.  There are a number of different vendors who built a box, called it a switch, and sold it to Cisco.  So there you have it.  No fancy algorithms or complex notations needed to explain that one.

So how do you know which commands to use on each switch?  Well, the more familiar you become with the different operating systems, the more it make sense.  There essentially are two main operating systems usually referred to as the “Set Based” switch and the “IOS Based” switch.  We will explore both of them throughout this course. 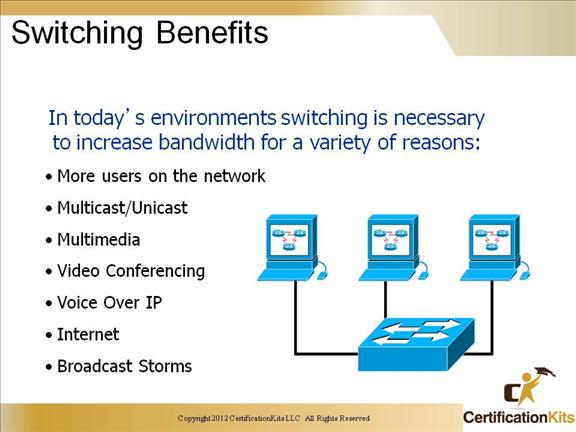 In  non-switched flat topology networks of today, when one PC wants to talk to another every PC hears and tries to process the communication to decide if they are the destination.

This is bad because:

The CPU on every PC must Process the data frames.

As more users use the network less bandwidth is available.

In  a switched network, switches learn the MAC addresses of every device attached to each port.  Once the mac address is learned, the switch can now forward the frames from the source interface directly to the port of the destination interface.  This virtually eliminates collisions, eliminates broadcast storms and frees valuable bandwidth. 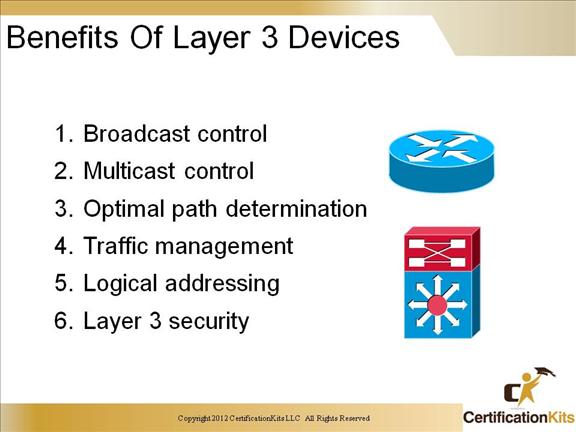 Ok, we are already familiar with Routing and the benefits of routing so why are we mentioning it here in a switching module?  Well because routing will always play an important part in all networking functionality.  Within this switching course we will identify that some switches have built in or modular routing functionality.  The hardware platforms that do not have built in or modular routing functionality still have a default gateway.  It is that default gateway, the router, that completes the building blocks of a network. 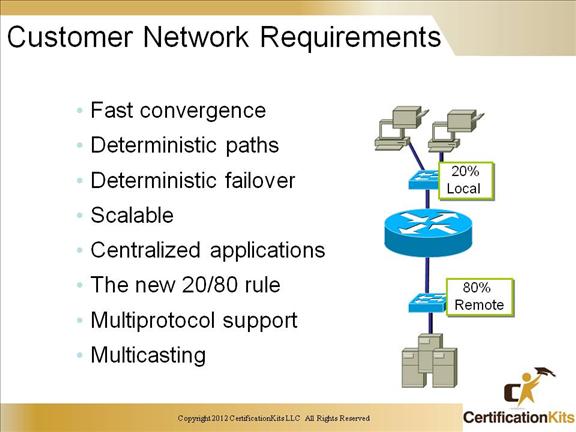 When we combine the benefits of switching and routing we achieve the following: 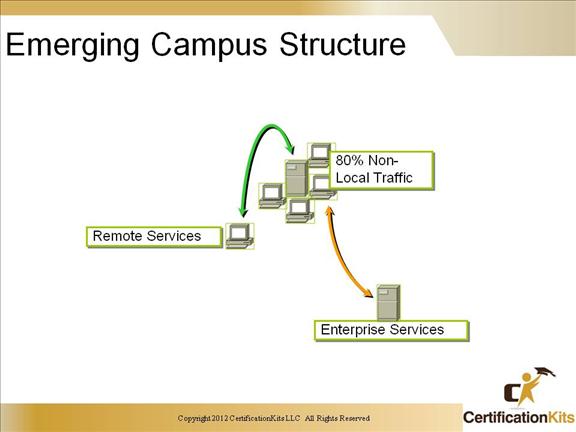 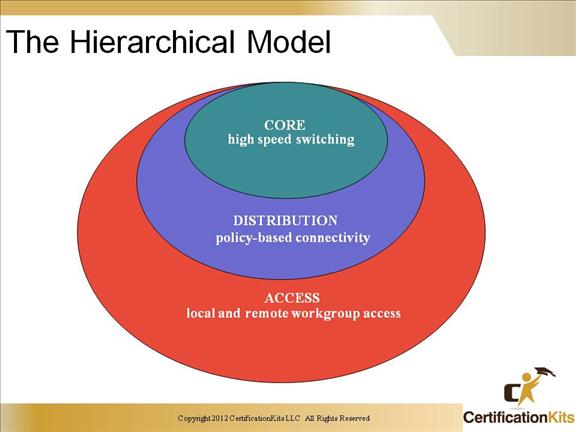 Cisco recommends that we build our networks with some logic behind our placement of each device.  Cisco’s Hierarchical Module consists of 3 separate layers; Core, Distribution and Access layer.  The Access Layer of the network is the point at where end-users are allowed into the network.  The key function of this layer is to provide access for end-users into the network.  In the campus environment, some of the functions performed by this layer are as follows:

Layer 2 services, such as VLAN membership and traffic filtering based on broadcast or MAC addresses.

The Distribution layer is located between the Access and Core Layer.  It  provides a boundary definition and designates where potentially “expensive” or processor intensive  packet manipulations such as filtering are handled.

The functions are represented in the Distribution Layer are as follows: 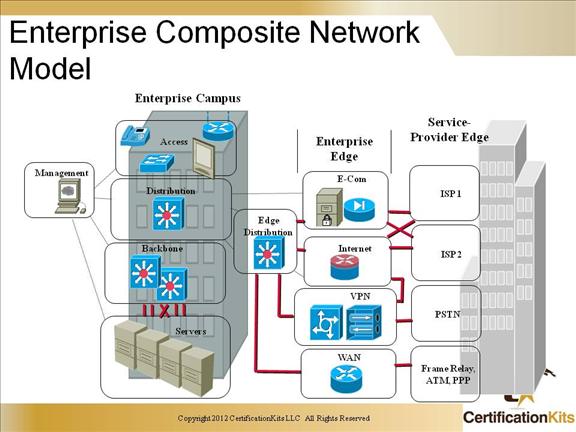 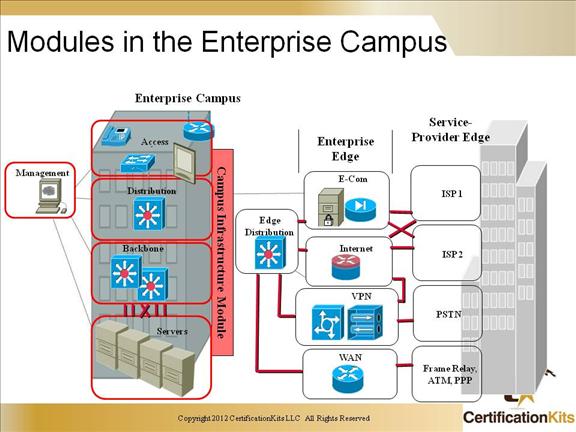 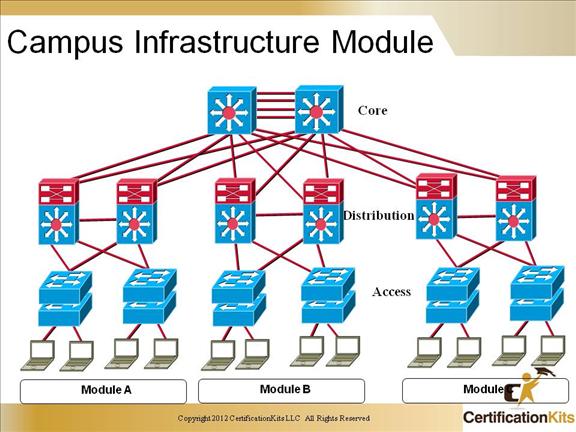 The Cisco three layer model network model with a Core, Distribution and Access Layer is a typical model for larger campus networks.  Having redundant connections within and between layers aids with designing and robust network. 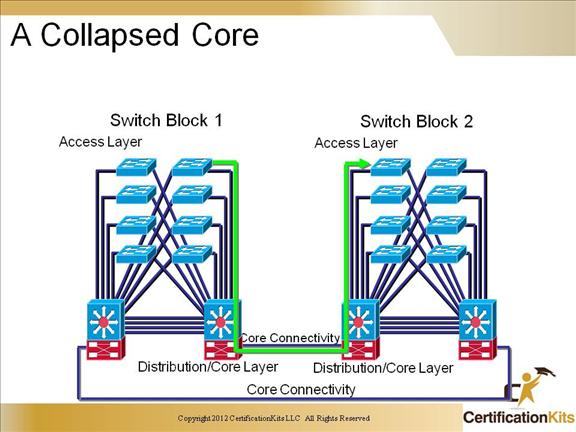 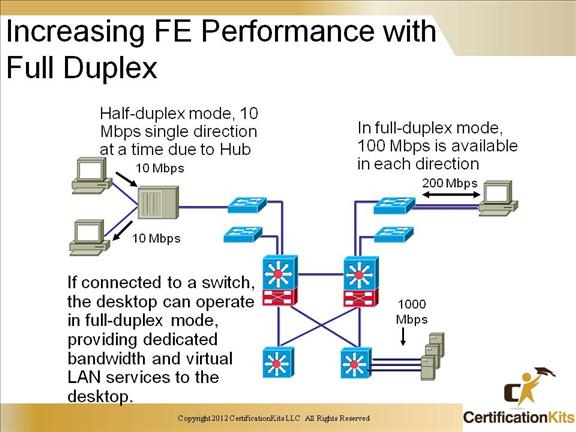 There are a number of different types of mediums that you can choose to use in your network.  The deciding factor on what type of medium you use will depend mainly on the type of medium that switch supports.  Fastethernet standards allow your medium to operate 10times faster than 10Mbps and operating in fullduplex your medium can offer up to 200Mbps thoughput, but it doesn’t stop there.  Can you say gigabit. Gigabit speeds enhances client/server performance across the enterprise and is used mainly to connect distribution-layer switches in each building with a central campus core.  Here is a quick peek at the different characteristics each type of switching medium covered in this section.