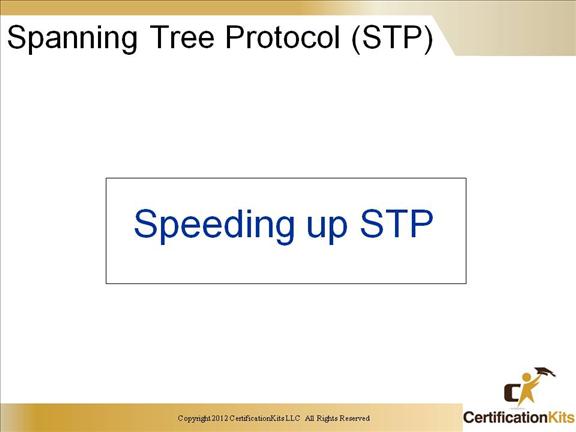 Cisco CCNP SWITCH What Is PortFast? 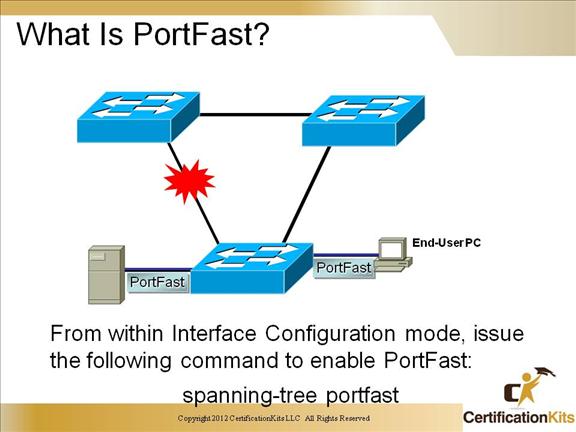 Portfast is used to minimize server or workstation downtime.  Portfast is configured on a port to port basis.  Be careful to only enable Portfast on ports that are connected directly to end hosts (i.e. servers or PCs), not to other siwtches. 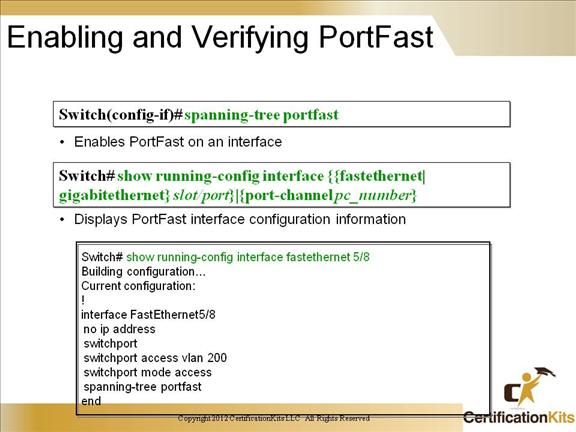 Note: You should use PortFast to connect a single end station or a switch port to a switch port.  If you enable PortFast on a port that is connected to another Layer 2 device, such as a switch, you might create network loops. 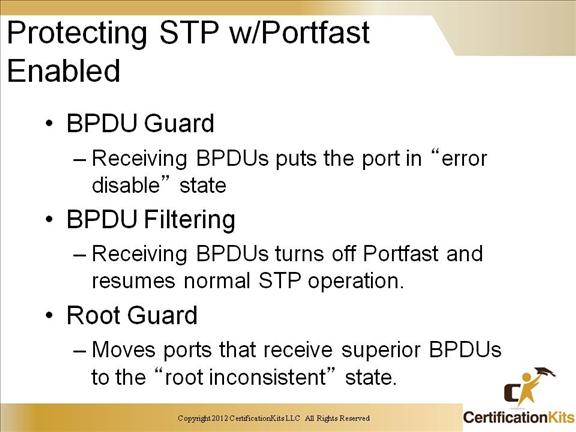 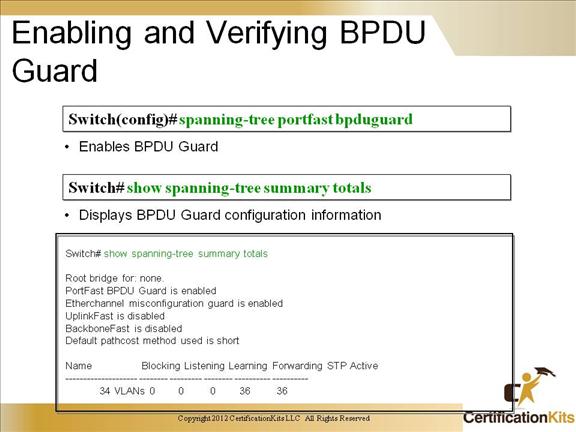 If a port with bpduguard enabled receives a BPDU, the port with be placed in errordisable state.

Cisco CCNP SWITCH What Is UplinkFast? 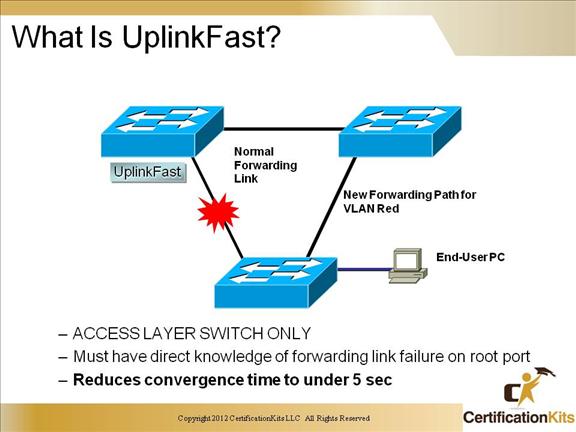 UplinkFast is a means for speeding up network convergence.  It minimizes network downtime from about 50sec. to somewhere less than 5sec.  Uplink fast is configured on a switch to switch basis and should only be configured on Access Layer Switches. 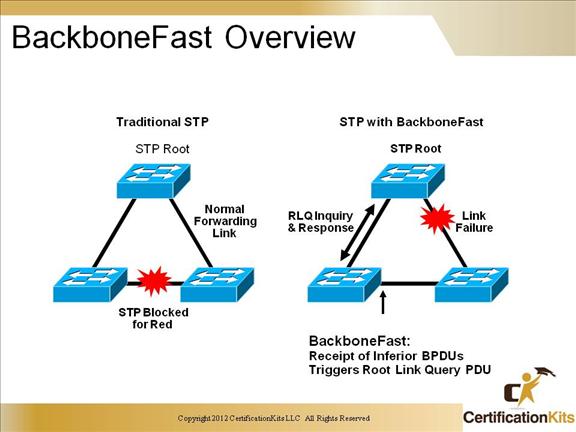 Backbone fast is configured on EVERY switch in the switching fabric.  Backbone fast uses Root Link Queries (RLQ).  Here is the scenario, a switches Root Port fails and it now thinks that it is the new Root Bridge.  It promotes itself and starts sending BPDUs, but switches in the network do not recognize the switch as being the Root so they send a RLQ to the real root bridge to see if it is still alive.  If the real Root Bridge answers, then the switch send a correction to the switch who lost his old Root Port and it now creates a new Root Port. 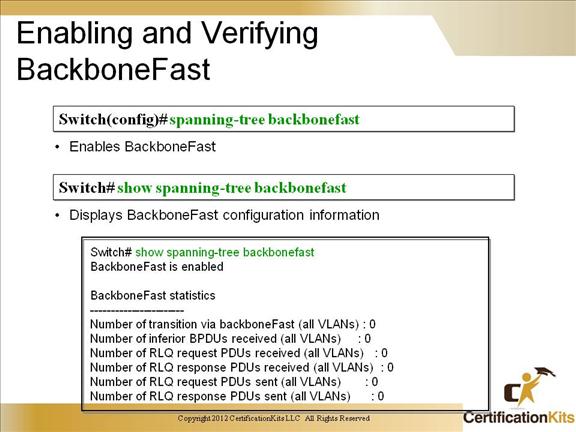 For BackboneFast to work, you must enable it on all switches in the network. BackboneFast is not supported on Token Ring VLANs. 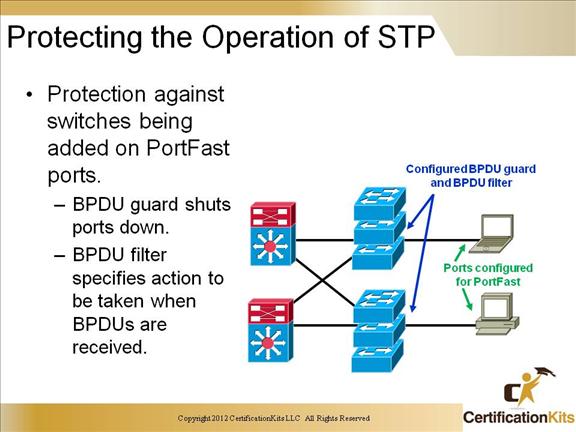 BPDU guard is used to protect the switched network from the problems that may be caused by the receipt of BPDUs on ports that should not be receiving them. The receipt of unexpected BPDUs may be accidental or may be part of an unauthorized attempt to add a switch to the network.

PortFast BPDU filtering affects how the switch acknowledges BPDUs seen on PortFast-configured ports. Its functionality differs if it is configured globally or on a per-port basis. This difference will be explained elsewhere in this course.

BPDU root guard protects against a switch outside the designated network attempting to become the root bridge by blocking its access until the receipt of its BPDUs ceases. 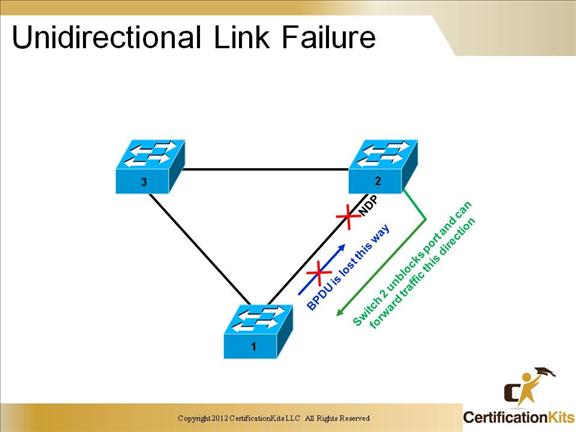 UDLD is a Layer 2 protocol that works with the Layer 1 mechanisms to determine the physical status of a link. If one fiber strand in a pair is disconnected, autonegotiation would not allow the link to become active or stay up. If both fiber strands are operant from a Layer 1 perspective, UDLD determines if traffic is flowing bidirectionally between the correct neighbors.

The switch periodically transmits UDLD packets on an interface with UDLD enabled. If the packets are not echoed back within a specific time frame, the link is flagged as unidirectional, and the interface is shut down. Devices on both ends of the link must support UDLD for the protocol to successfully identify and disable unidirectional links. 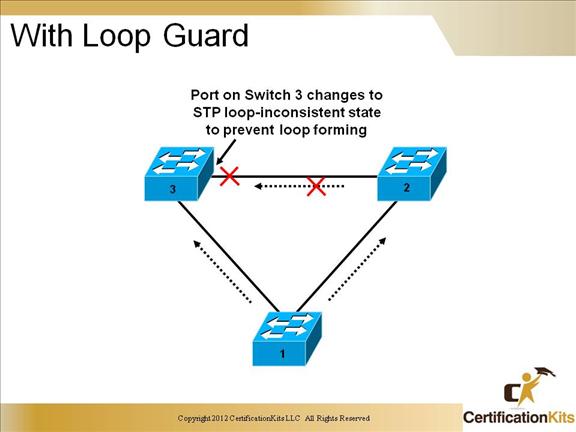