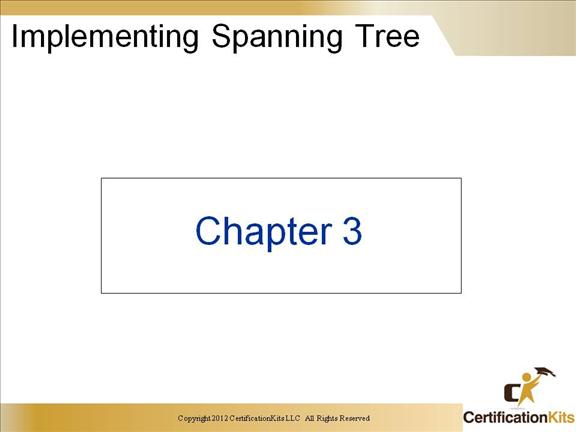 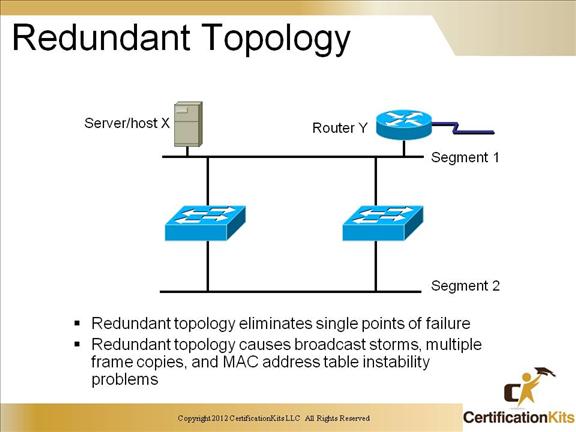 Spanning Tree Protocol is a bridge protocol that enables a learning bridge to dynamically work around loops in a network topology by creating a spanning tree. Bridges exchange Bridge Protocol Data Unit (BPDU) messages with other bridges to detect loops, and then remove the loops by shutting down selected bridge interfaces.

STP provides a loop free redundant network topology by placing certain ports in the blocking state. STP uses the Spanning Tree Algorithm (STA) to find redundant links and shut them down. STP’s main task is to stop network loops from occurring on your layer-2 network (bridges or switches). It vigilantly monitors the network to find all links, making sure that no loops occur by shutting down any redundant ones. 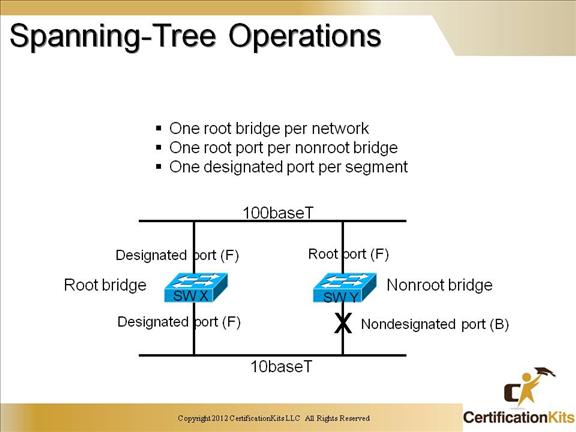 A switch performs spanning tree by default.  The default settings will elect a root bridge and calculate the shortest path from every switch to the root 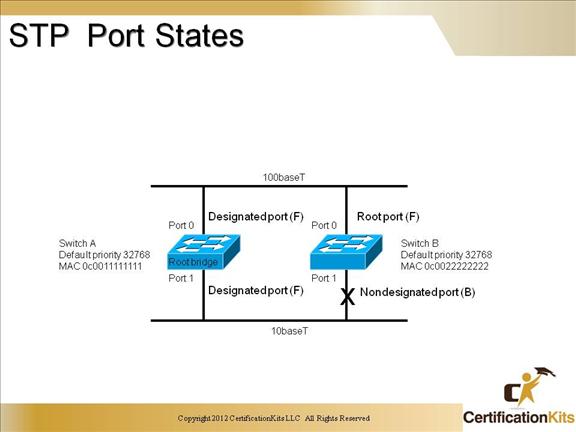 Active Ports will have the lowest combination of:

Path from any switch to the root will travel either directly to the root bridge or though a parent or “designated” switch.  Blocked ports continue to send/receive BPDUs but NOT DATA. 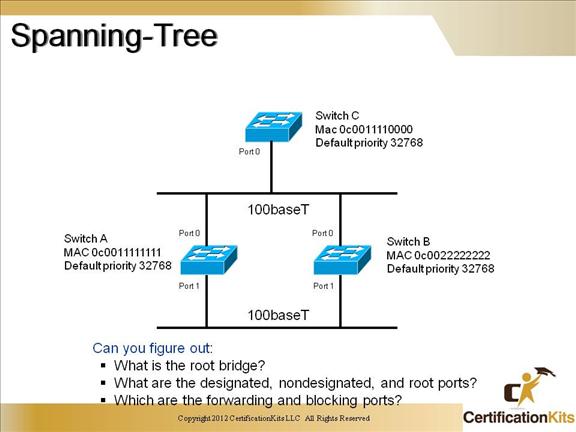 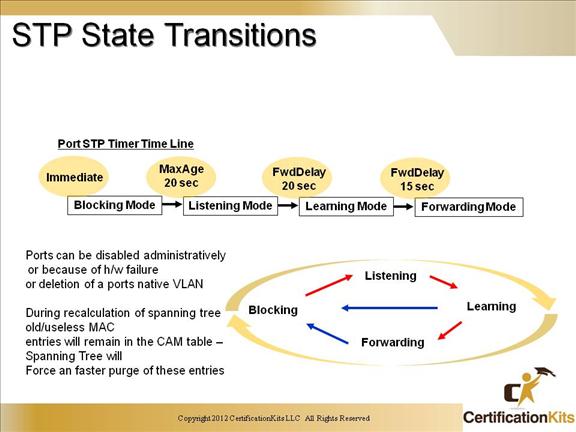 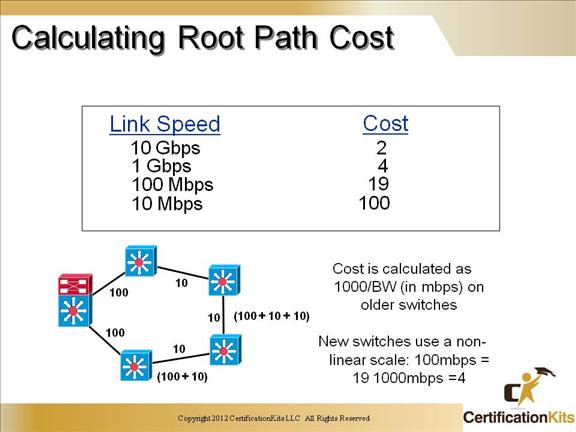 Path cost is a function of bandwidth of each path.  It can be changed using a switch port cost parameter.  Is determined by the sum of port costs between source and destination. 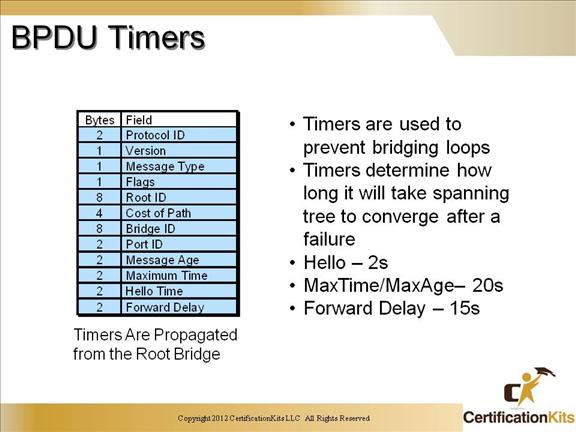 BPDU timers are set by the Root bridge.  By default the hello interval is set to once every 2 seconds.  Why so often?  To avoid loops! 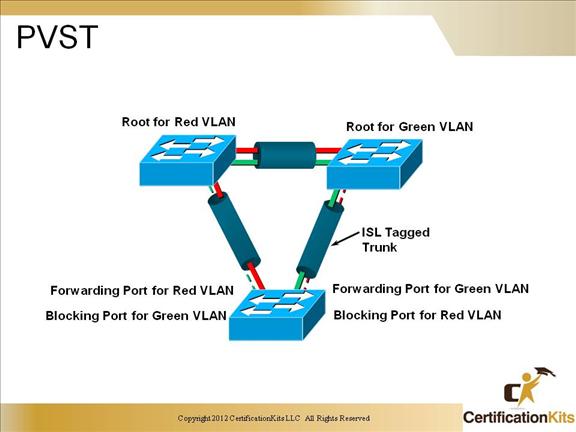 Per VLAN Spanning Tree allows the network administrator to control the forwarding paths on per vlan basis.  It also creates a flexible design tool for traffic management that will give you the capability to provide layer 2 redundancy. 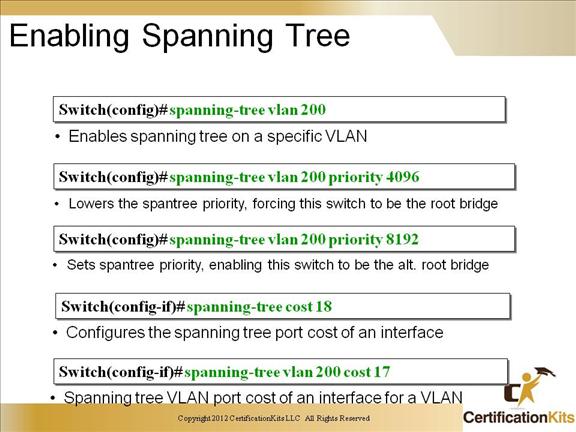 Wow, the whole enchilada.  We placed a bullet point under each of the commands to help you digest what is going on in these examples.  All of the above is not necessary to configure spanning-tree, but it shows the flexibility in dictating which switch will become the root bridge. 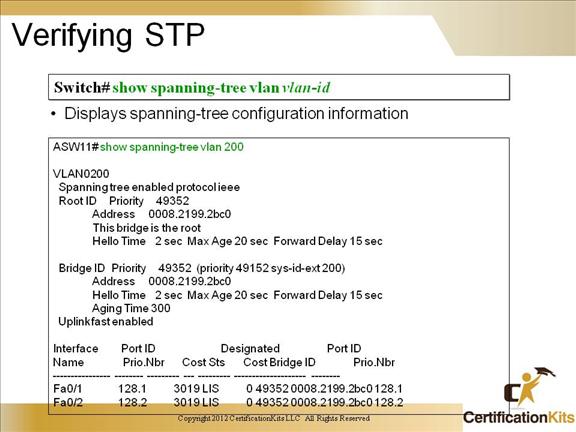 The keywords and arguments that are available with the show spanning-tree command will vary depending on the platform you are using and the network modules that are installed and operational.  The example on the slide shows the “vlan” argument being utilized.