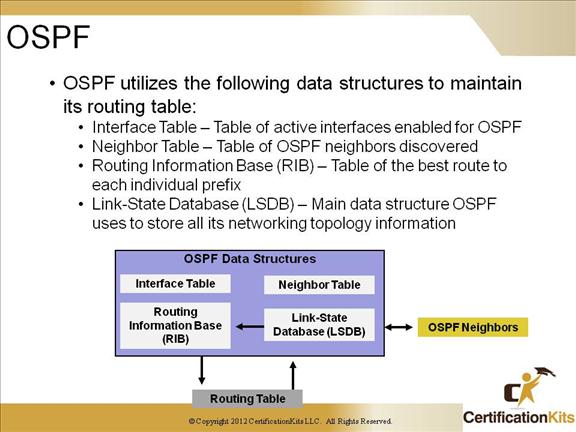 Interface table – Compiles all interfaces that have bee configured to participate in OSPF.  The directly connected subnets associated with these interfaces are included in the type 1 router LSA that the router injects into the OSPF LSDB.  An interface configured as a passive interface is still listed in the OSPF interface table although no neighbor relationships are established on this interface.

Neighbor table – Used to keep track of all OSPF neighbors.  Neighbors are added to the table upon receipt of hello packets whereas they are removed when the OSPF dead timer for a neighbor expires or when the associated interface goes down.

Routing Information Base (RIB) – The RIB includes information for the best routes to each individual prefix in the OSPF network with their associated path costs.  This information is derived after executing the SPF algorithm.  When the information in the LSDB changes, only a partial recalculation might be necessary.  Routes might be added or deleted from the RIB without the need for a full SPF recalculation.  Based on the RIB, OSPF will attempt to install its routes into the routing table. 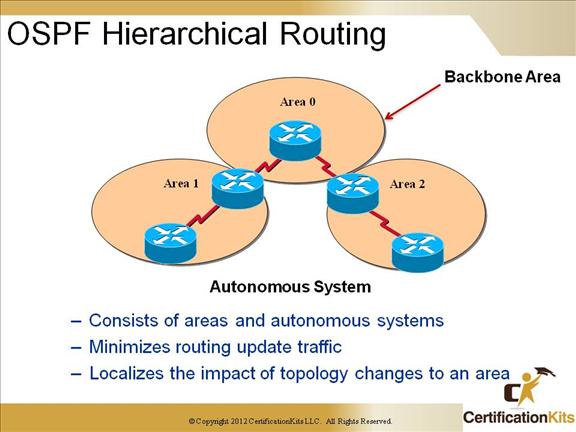 OSPF is designed in a hierarchical fashion, which basically means that you can separate the larger internetwork into smaller internetworks called areas. All OSPF networks MUST contain Area 0 and all areas MUST directly connect to Area 0.  This is depicted in the slide where both Area 1 and Area 2 are directly connected to the Backbone Area, Area 0.  There is one exception to this rule where a virtual link can be established but it should only be used for a temporary solution (i.e. merging two different company networks).  Details of virtual links are not covered in this course. 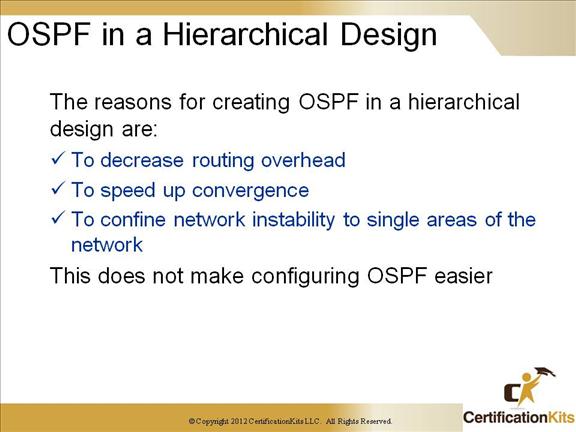 OSPF has special restrictions when multiple areas are involved. If more than one area is configured, one of these areas has be to be area 0. This is called the backbone. When designing networks it is good practice to start with area 0 and then expand into other areas later on.

Utilizing multiple areas is typically a good design for OSPF.  Creating OSPF in a hierarchical design has numerous benefits that include:

– Confines network instability to single areas of the network

Note: While it makes OSPF more efficient, it does not make configuring OSPF easier. 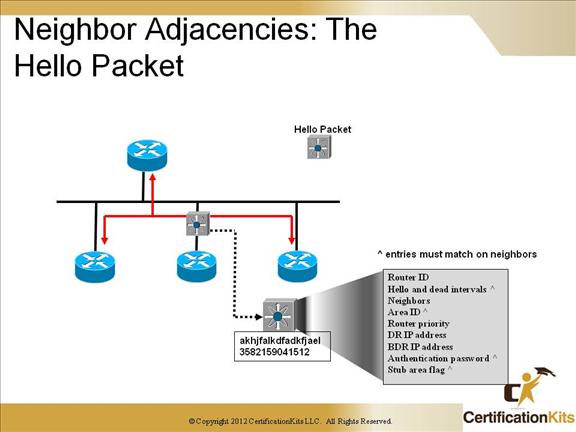 Hello packets are utilized by OSPF routers to recognize each other in order to share information.  Each interface participating in OSPF sends hello packets multicast periodically to 224.0.0.5.  The entries in the figure with an “^” much match between adjacent routers or a neighbor relationship will NOT be established.  These include Hello and dead intervals, Area ID, Authentication password (if used) and Stub area flag. 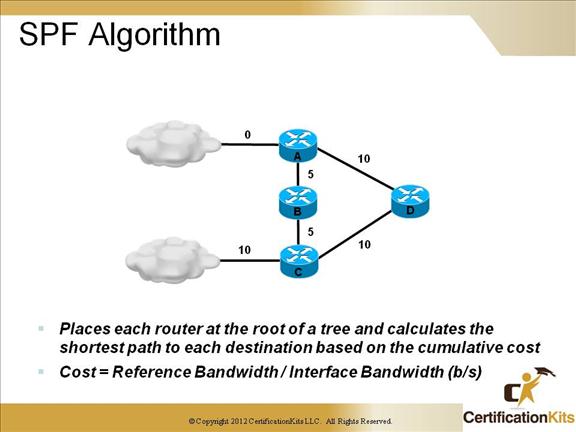 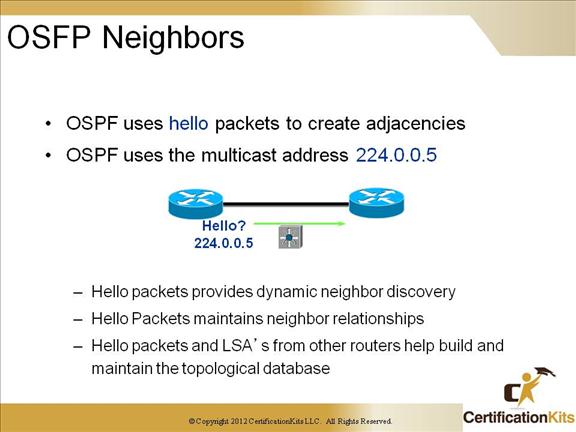 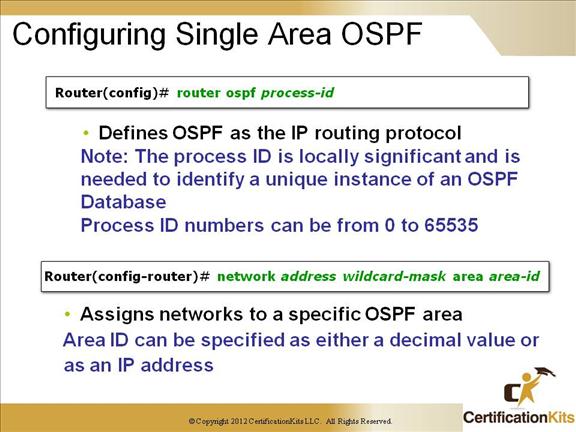 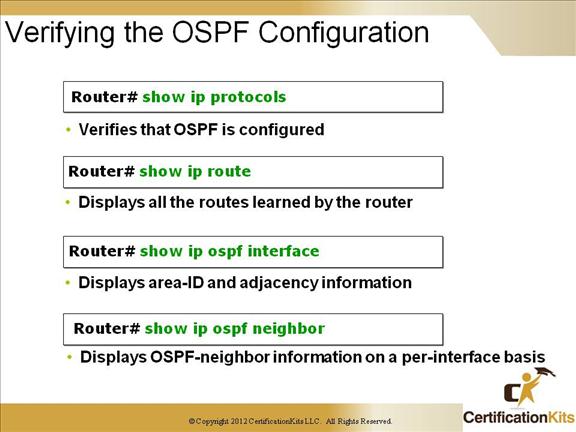 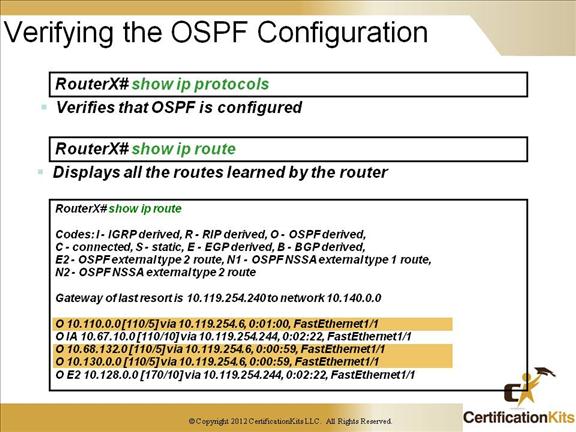 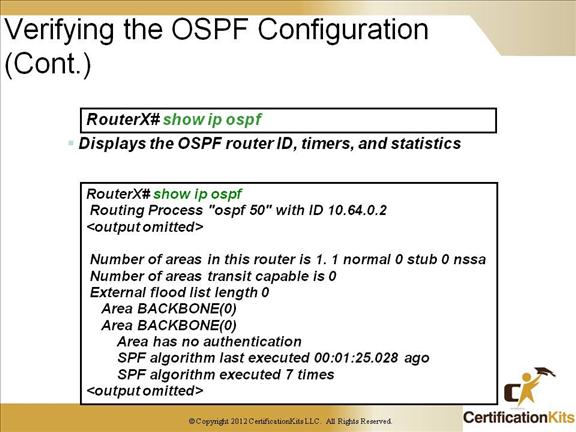 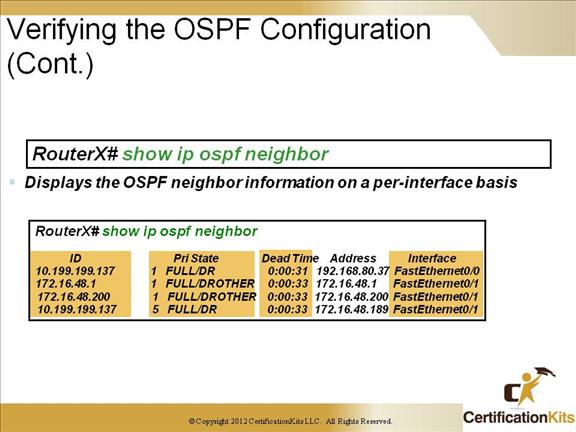 Interface – Interface the neighbor is learned on 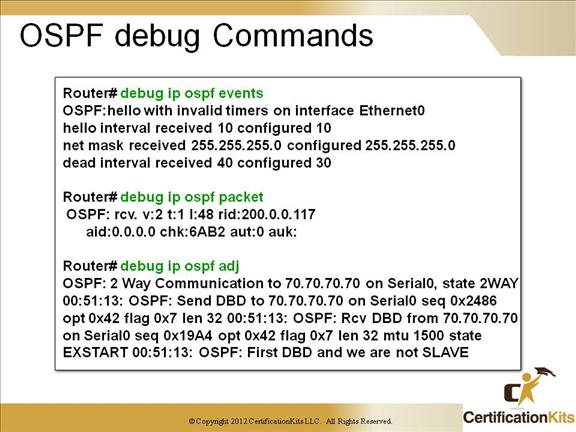