In preparation of our CCNA exam, we want to make sure we cover the various concepts that we could see on our Cisco CCNA exam. So to assist you, below we will discuss the 7 Layer OSI Model.

Short for Open System Interconnection, an ISO standard for worldwide communications that defines a networking framework for implementing protocols in seven layers. Control is passed from one layer to the next, starting at the application layer in one station, proceeding to the bottom layer, over the channel to the next station and back up the hierarchy.

At one time, most vendors agreed to support OSI in one form or another, but OSI was too loosely defined and proprietary standards were too entrenched. Except for the OSI-compliant X.400 and X.500 e-mail and directory standards, which are widely used, what was once thought to become the universal communications standard now serves as the teaching model for all other protocols.

Control is passed from one layer to the next, starting at the application layer in one station, proceeding to the bottom layer, over the channel to the next station and back up the hierarchy.

Physical layer defines the cable or physical medium itself, e.g., thinnet, thicknet, unshielded twisted pairs (UTP). All media are functionally equivalent. The main difference is in convenience and cost of installation and maintenance. Converters from one media to another operate at this level.

Data Link layer defines the format of data on the network. A network data frame, aka packet, includes checksum, source and destination address, and data. The largest packet that can be sent through a data link layer defines the Maximum Transmission Unit (MTU). The data link layer handles the physical and logical connections to the packet’s destination, using a network interface. A host connected to an Ethernet would have an Ethernet interface to handle connections to the outside world, and a loopback interface to send packets to itself.

Ethernet addresses a host using a unique, 48-bit address called its Ethernet address or Media Access Control (MAC) address. MAC addresses are usually represented as six colon-separated pairs of hex digits, e.g., 8:0:20:11:ac:85. This number is unique and is associated with a particular Ethernet device. Hosts with multiple network interfaces should use the same MAC address on each. The data link layer’s protocolspecific header specifies the MAC address of the packet’s source and destination. When a packet is sent to all hosts (broadcast), a special MAC address (ff:ff:ff:ff:ff:ff) is used.

NFS uses Internetwork Protocol (IP) as its network layer interface. IP is responsible for routing, directing datagrams from one network to another. The network layer may have to break large datagrams, larger than MTU, into smaller packets and host receiving the packet will have to reassemble the fragmented datagram. The Internetwork Protocol identifies each host with a 32-bit IP address. IP addresses are written as four dot-separated decimal numbers between 0 and 255, e.g., 129.79.16.40. The leading 1-3 bytes of the IP identify the network and the remaining bytes identifies the host on that network. The network portion of the IP is assigned by InterNIC Registration Services, under the contract to the National Science Foundation, and the host portion of the IP is assigned by the local network administrators. For large sites, the first two bytes represents the network portion of the IP, and the third and fourth bytes identify the subnet and host respectively.

Transport layer subdivides user-buffer into network-buffer sized datagrams and enforces desired transmission control. Two transport protocols, Transmission Control Protocol (TCP) and User Datagram Protocol (UDP), sits at the transport layer. Reliability and speed are the primary difference between these two protocols. TCP establishes connections between two hosts on the network through ‘sockets’ which are determined by the IP address and port number. TCP keeps track of the packet delivery order and the packets that must be resent. Maintaining this information for each connection makes TCP a stateful protocol. UDP on the other hand provides a low overhead transmission service, but with less error checking. NFS is built on top of UDP because of its speed and statelessness. Statelessness simplifies the crash recovery.

The session protocol defines the format of the data sent over the connections. The NFS uses the Remote Procedure Call (RPC) for its session protocol. RPC may be built on either TCP or UDP. Login sessions uses TCP whereas NFS and broadcast use UDP.

External Data Representation (XDR) sits at the presentation level. It converts local representation of data to its canonical form and vice versa. The canonical uses a standard byte ordering and structure packing convention, independent of the host. 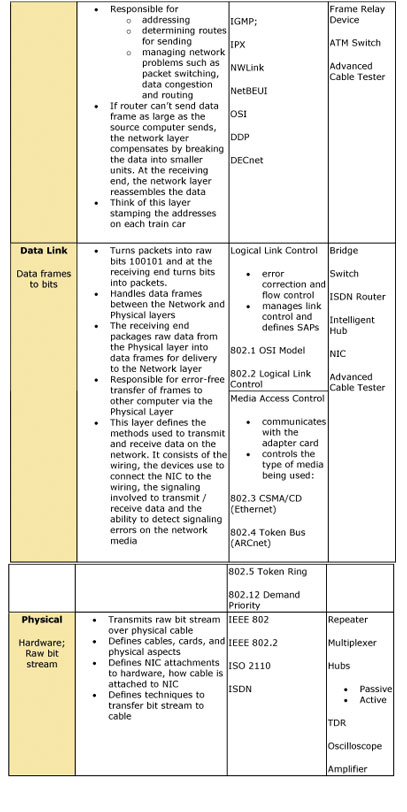 I hope you found this article to be of use and it helps you prepare for your Cisco CCNA certification. I am sure you will quickly find out that hands-on real world experience is the best way to cement the CCNA concepts in your head to help you pass your CCNA exam!