On the new version of the Cisco CCENT 100-101, Cisco ICND2 200-101 and CCNA 200-120 exams Cisco has made the questions much, much, harder than previous versions of the CCNA exam.  Today we are going to cover an example of a Spanning Tree Protocol scenario type question that you might see on your Cisco CCENT or CCNA exam.  As frustrating as some of these harder questions are, they are great for real world preparation.  It also makes obtaining your CCENT or CCNA certification harder which makes the certification more valuable!  So here is today’s sample exam question.

Refer to the exhibit below. All the switches have been interconnected with the links as shown in the diagram. Which ports will be STP root ports if all the links are operating at the same priority? (Choose three) 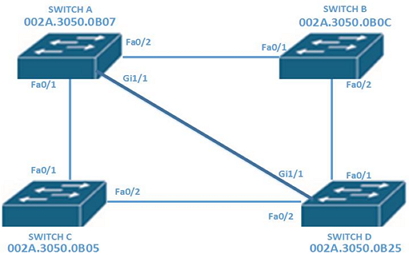 Please pick from the below options the three correct answers.

Now this is where we want to talk a little bit about how a real CCENT or CCNA home lab will be really helpful as you embark on your Cisco certification studies. It is great if you can understand these concepts conceptually.  But most people learn much better with hands on experience.  This gives you the opportunity to experiment outside the actual question or lab scenario to quench your curiosity on many what-if scenarios.  For instance in the CCNA lab example above, how will things change if the link between Switch A and Switch D where not Gigabit and they were simply FastEthernet?  Or what if you had a redundant Gigabit link between Switch A and Switch D?  When you can start to figure out those types of things on the fly without looking up the theory behind the certification concept is when you know you really know the topic.  So let’s take a look at the supporting theory behind the answers and we will put the answers all the way down at the bottom so you don’t see them by mistake.

Spanning Tree Protocol (STP) is a loop prevention in a redundant switched network by ensuring that there is only one logical path between all destinations on the network by intentionally blocking redundant paths that could cause a loop. The switch sends BPDUs (Bridge Protocol Data Units) out every active port once every 2 seconds so as to find a redundant link. Redundant links are found when the switch receives its own BPDU.

The root bridge is determined by the switches’ mac address (lower is better), then the priority which is 32769 by default, then the cost of the link which is the bandwidth, and finally the lower port on a switch.

Root ports are the best paths to the root bridge while the other ports which are neither root ports nor designated ports are blocked to avoid loops.

In this scenario, SWITCH C is the root bridge since it has the lowest mac address and thus a lower BID. All ports on other switches that connect to SWITCH C are root ports. The ports on switch C are designated ports, therefore FA 0/1 on SWITCH A and FA 0/2 on SWITCH D are root ports.

On SWITCH D, port GI 1/1 will be blocked while port GI 1/1 on SWITCH A will be the designated port on this link.

For more detailed information on root bridge election and port roles refer to the STP topic.

The correct answers are: