For today’s CCENT / CCNA certification exam topic we are going to cover Spanning Tree Protocol.  STP is one of the more confusing topics you may encounter on the CCENT and CCNA exams.  I think most of the reason STP is a difficult topic for most is that the student is suffering from information overload by the time they study all the material Cisco wants you to know for the exam.  That is why many students do find that it is best to break up the Cisco Routing and Switching certification topics into two exams: ICND1 which gives you the CCENT certification and ICND2 which gives you your CCNA certification.

So let’s talk a little bit about Switching and the Cisco exam.  Switching and the related concepts have really come for the forefront on the exams as of late.  You really need to be able to look at a network topology diagram like you see here and be able to interpret it.  That is what we hope to help you with in this article.

So take a look at the four switches that we have noted above.  Also pay special attention to how they are cabled as that is going to give you some great insight on how to approach these exam questions that were designed to trip you up!  So let’s see if you really understand Spanning Tree Protocol. 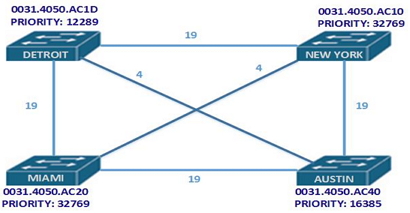 Refer to the exhibit. Based on the information given, which switch will be elected root bridge and why?

A. Switch NEW YORK, because it has the lowest MAC address

B. Switch MIAMI, because it is the most centrally located switch

C. Switch DETROIT, because it has the lowest priority

D. Switch AUSTIN, because it is the most centrally located switch

E. Switch DETROIT, because it has the highest MAC address

F. Switch NEW YORK, because it has the highest priority and the lowest MAC address

– If you already know the answer, that is great.  But if not, let’s walk through a bit of STP theory and then go over each of the questions one by one to see if you can then determine the correct answer from some of the help we will provide below.

Spanning Tree Protocol (STP) is a loop prevention in a redundant switched network by ensuring that there is only one logical path between all destinations on the network by intentionally blocking redundant paths that could cause a loop. The switch sends BPDUs (Bridge Protocol Data Units) out every active port once every 2 seconds so as to find a redundant link. Redundant links are found when the switch receives its own BPDU.

Root ports are the best paths to the root bridge while the other ports which are neither root ports nor designated ports are blocked to avoid loops.

The link costs in STP are shown below.

So from our explanation you should have come up with the answer of C.  Switch Detroit because it has the lowest priority.  For more detailed information on root bridge election and port roles refer to the  CCNA STP topic we have here.  Then if you really want to accelerate your learning, see how it works in the real world with one of our home lab kits!